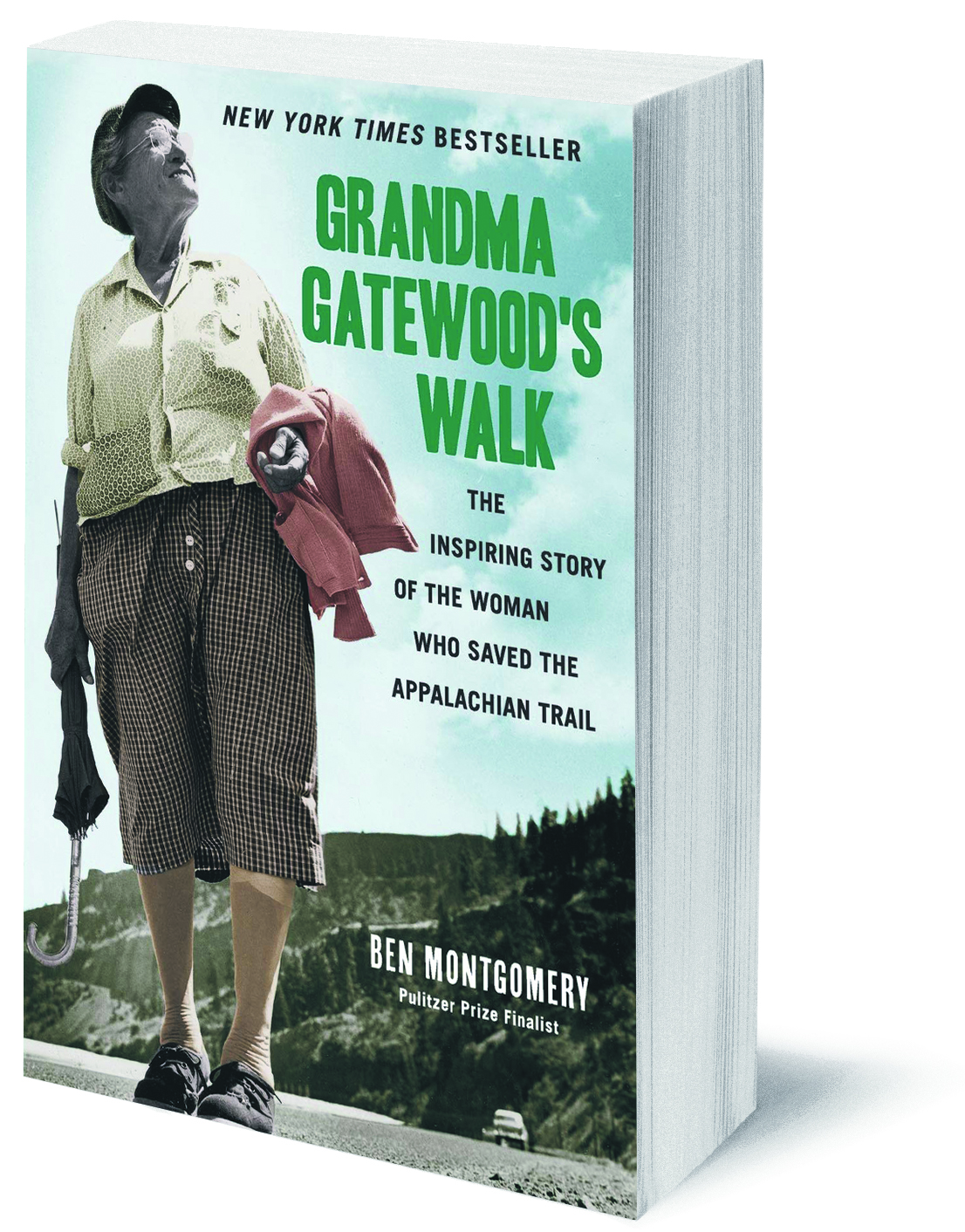 At 67 years old, Emma Gatewood told her family that she was going for a walk. Inspired by an article in National Geographic, she set out to make history as the first woman to complete a thru-hike of the Appalachian Trail. It took Gatewood months to complete the journey of more than 2,000 miles, but she reached her goal. She also became a celebrity along the way, with people around the country cheering for her.

“I think Emma Gatewood’s story has lessons for us all, no matter our age or station in life,” said Montgomery. “She overcame. She pioneered. She left us signposts against which we can measure our own achievements.”

The story is inspiring – an abuse survivor and mother of 11 defies expectations again and again, reaching a goal that most people would not have believed possible for a woman of her age. As readers, we find ourselves wondering what we could accomplish, if we set our minds to it. The book is well-researched and written in great detail, so readers pick up a lot of information about the region and the history of the Appalachian Trail.

Grandma Gatewood’s Walk has more than 4 stars on both Goodreads and Amazon. I am not a big nonfiction reader, but the narrative of the book sucked me in and wouldn’t let me go. It’s a book that excites readers and they want to tell others, which is why several other cities besides Topeka have chosen it for a community read. Montgomery said that Thousand Oaks, California; Broomfield, Colorado; Athens, Ohio; Kokomo County, Indiana; and most recently Sandwich, Massachusetts have also read and discussed the book as a community. Even Montgomery is sometimes surprised by the reach of his book.

“I hiked a big chunk of the Appalachian Trail with my kids this summer and was overjoyed to see it [Grandma Gatewood’s Walk] in lots of shops along the trail and to bump into people who were reading it,” said Montgomrey. “In fact, I happened to be eating in a hotel in Switzerland two weeks ago, on a hike along the Tour du Mont Blanc, and struck up a conversation with a woman from Toronto. When I mentioned Grandma Gatewood, she grew excited and said she’d read the book. I’ve never felt more famous!”

Ben Montgomery’s stories have appeared in national magazines, such as Parade and Seventeen, and he has contributed to NPR’s Radiolab. He has taught narrative journalism at the Poynter Institute for Media Studies and at universities and workshops across the country. Montgomery has also worked for newspapers in Arkansas, Texas, New York and Florida. In 2010 he was a finalist for the Pulitzer Prize.

Fun Fact: Grandma Gatewood also walked the Oregon Trail and went through Kansas! The book quotes statements that Gatewood made in Junction City and Wichita.

Read on for an interview with the author to learn more about what he likes to read and how he feels about libraries.

How has Grandma Gatewood’s Walk been received by readers? Any updates on Gatewood since the publication of the book?

In terms of impact, if you’re interested, a few very cool things have happened. The New York Times gave Emma Gatewood a posthumous news obituary, part of the paper’s Overlooked No More series. Ohio erected an historical marker in her hometown and proclaimed April 27 Emma “Grandma” Gatewood Day. Several other communities have selected the book as a community read — Thousand Oaks, Calif., Broomfield, Colo., Athens, Ohio, Kokomo County, Indiana, and most recently Sandwich, Massachusetts. And the book continues to sell well, five years after publication. I hiked a big chunk of the Appalachian Trail with my kids this summer and was overjoyed to see it in lots of shops along the trail and to bump into people who were reading it. In fact, I happened to be eating in a hotel in Switzerland two weeks ago, on a hike along the Tour du Mont Blanc, and struck up a conversation with a woman from Toronto. When I mentioned Grandma Gatewood, she grew excited and said she’d read the book. I’ve never felt more famous!

Why do you think that this book has resonated with readers and continues to be so popular, 5 years after publication?

I think Emma Gatewood’s story has lessons for us all, no matter our age or station in life. She overcame. She pioneered. She left us signposts against which we can measure our own achievements. And her story is evergreen, as we call it in the newspaper business. It’s accessible to readers across all demographics no matter the season or year. I’m tickled when I hear from teenage readers who found the book just as inspiring as their elders. All that said, I humbly admit that I continue to be surprised that so many folks seem to get some much out of a story that is fundamentally about a woman doing exactly what she wanted to do: take a long walk in the woods.

What’s the last great book you read? What did you love about it?

I’m engaged in another book project, so much of my reading for the past six months has been about Reconstruction and racial violence and Kentucky in the late 19th Century. I do get to read for pleasure once in a while, though, and the best book I’ve read in the past five years is Stoner by John Williams. It’s a devastating book that has the potential to change your life, or reshape how you see failure. Published in 1965 to not much praise, it has only recently come to be regarded, per The New Yorker, as “the greatest American novel you’ve never heard of.” Upon finishing, I cast the book across the room. Anything that prompts a physical reaction like that is worth your time.

Which genres do you enjoy reading the most?

I enjoy historical narrative nonfiction. It makes up most of what I read. I was on a panel at the Mayborn Conference in Texas with Hampton Sides this summer, so I read almost all of his published work and was fascinated by his tic-tock recreation of the MLK assassination in Hellhound on His Trail.

Your background is in journalism, and you write nonfiction. Who are the journalists and nonfiction writers publishing work now that you admire, read, or follow online?

Well, Hampton Sides is one. And Timothy Egan. I love Dan Barry and Michael Paterniti. I had a lot of fun reading Boom Town, by Sam Anderson, which is a weird and wonderful history of Oklahoma City. Others I’ve enjoyed recently include James Scott’s Rampage, about the Battle of Manila; Tommy Tomlinson’s Elephant in the Room, about the wonderful writer’s lifelong weight issues; Paige Williams’ The dinosaur artist, about a man’s obsession with bones; Jason Ryan’s Race to Hawaii, about a 1927 air race across the Pacific; and Julia Flynn Siler’s The While Devil’s Daughters.

Did you read much as a child? What were some of your favorites?

I didn’t read much as a child, no. I wanted to be a rodeo cowboy and you didn’t need books for that. But I had a sort of “magic book” experience when I was 15. I was staying with my grandparents in a little place called Slick, Oklahoma, and I was bored to death. I descended into their basement one evening because I loved being below ground in my grandfather’s study. I scanned his bookshelves and pulled off the slimmest book I could find and began reading. It happened to be The Catcher in the Rye and I read the entire book without interruption. It was a moment that made me a life-long reader. My favorite class in college was called Nobel Prize-Winning Literature from 1900 to 1990, and it served as my introduction to great writers outside America, folks like Samuel Beckett and Jose Saramago and Kenzaburo Oe.

Last, a bit on libraries. Do you use the library? Any good memories of the library to share? In your own words, why are libraries still valuable in the digital age?

I’m in the library often, my home away from home. If you can’t find me at home, in fact, you should check the libraries and cemeteries and maybe the hotel bar. I find librarians to be the most helpful people on the planet. When I’m researching for a book, I’ll visit every library I possibly can. Most recently, that was the lovely Louisville Free Public Library, where I scanned microfilm from hundred-year-old Kentucky newspapers. And they didn’t even charge me for my print-outs. Libraries are foundational to democracy, to a learned and engaged public. Without them we’d be screwed.