For every exhibit in the Alice C. Sabatini Gallery, we move walls, hang artwork and install art objects in display cases. As our exhibits have evolved over the years, we’ve also taken advantage of new technology. With the new gallery redesign we’ve been able to incorporate cutting-edge augmented reality (AR) into our exhibits. It offers our visitors a whole new way to interact with art.

Travis Garwood, Public Services Specialist in the Gallery, has helped us integrate new technology into our exhibits. I talked with Travis about how far we’ve come from the traditional “art on the wall” exhibits of the past.

What are some of the ways you’ve integrated new technologies into our exhibits? 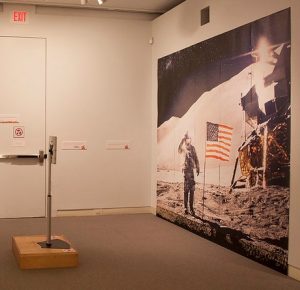 I’m going to talk about what “we” have done. I say we because without the support of our Digital Services department, especially Joey Embers, adding these digital resources would not have gone as smoothly as it has.

In the Story Worlds exhibit we used huge touch-screen monitors with digital drawing apps. Those were very popular. In Across the Universe we had a selfie station where people could take a picture with an astronaut and we had an iPad with an app to view constellations.

For the Forest Bathing: A Walk in the Trees exhibit, we tried something completely new. We incorporated a LightForms LF2 Augmented Reality projector. I used this projector in conjunction with life-size papier-mâché trees Betsy Roe made. The projector contoured to chosen areas of the trees and added color patterns, images, videos and various other effects.

What can we do with our new sound system?

The new system most certainly is an improvement. The old sound system was just an all or nothing system. Either you had sound throughout the whole gallery or you didn’t have sound at all. The new sound system has five independent zones. That means we can choose where we want the sound to go and how loud we want it to be.

There is also a video capability to the new system. We can run video though dedicated outputs in the walls. This system will be amazing when we are able to have artist talks again.

Tell us a little more about the augmented reality (AR) projector and how it was used in Forest Bathing. 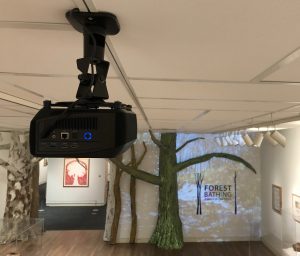 Yes, this was the first time we experimented with our LightForm AR projector. At the most basic level, an AR projector creates interesting visual elements that overlay onto objects in a physical environment.

We used our projector over an installation element created by Betsy Roe for the exhibit. Betsy designed the trees in the exhibit and I created a visual show that overlays a few of the trees and over one of the walls.

After the projector scans the surface we are projecting onto, I use the LightForm Creator software to create the visual elements for projects. This is done in layers by masking the surfaces you want the effects to overlay. For example, I made a mask for the trees and that was one surface to overlay effects, and the wall was another mask to overlay effects. You can add and taken away those surfaces as you work on the project. 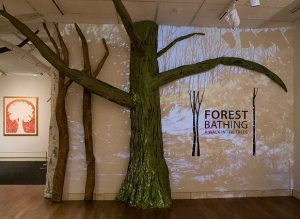 The assets that can be used on the surfaces are limitless with possibilities. The software has built in effects, but you can also create your own. For an example of what these effects look like, if anyone remembers music visualizers in media player software those effects are like that. They vibrate, pulse and all other sorts of fun things.

In addition to those effects any number of pictures or videos can be added. I used a couple of different photos of the paintings in the exhibit as a background on the wall behind the trees.

We look forward to using this projector in new ways in future exhibits. One of the Gallery’s new features is a ceiling grid that makes this even more possible. We can hang the projector from anywhere on this grid, which allows us a great deal of versatility. The grid system is also weight bearing so art that needs to be hung from the ceiling can now be exhibited in the gallery.

What other new technologies would you like to use in future exhibits?

First, I want to mention the work we are doing to allow the exhibits to live on after they’re taken down. Right now we take photos of the exhibits and put them on the gallery’s Flickr page for posterity. 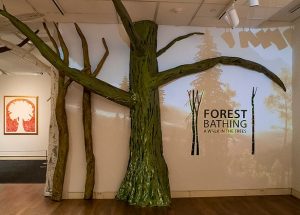 Along with doing that I have been working on creating virtual walkthroughs using a 3D camera. These tours will allow viewers to experience an exhibit months, years or even decades after it has ended.

We’re continuing to explore more interactive digital experiences for the gallery. There will definitely be more digital drawing like when we used the drawing app and huge touch screen, something like that but using a projector. Having some digital interactive element would go over very well with children especially for our summer kids exhibits.

With this past year of the global pandemic, I really wanted to find a way to bring the Alice C. Sabatini’s art collection into people’s homes. I have been investigating the possibilities of using augmented reality so the art collection could be digitally viewed from anywhere through an app. We are continually looking at innovative technology and ideas to expand the experiences at the Alice C. Sabatini Gallery.