As Halloween approaches, many people seek out real-life hauntings to get spooked. Here is a list of towns in northeast Kansas – Atchison, Holton, Lawrence, Leavenworth, Manhattan, and Topeka – that have haunting worth noting for a spooky time! There’s also information on ghost tours that take you around to various supernatural loactions! There’s more haunted towns and places in the six towns mentioned, so be sure to check out books and movies from the libraries to get more details, more towns, and more haunted locations! 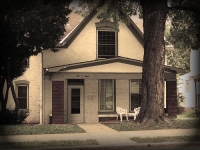 The Sallie House: Legend says that in 1906 a young girl died an excruciating death on the operating table due to complications of appendectomy surgery involving not enough anethesia. One family – a father, mother, and infant – lived in that has for several years and dealt with strange occurrences of electrical appliances turning off and on and pictures turned upside-down on the wall by themselves. Finally, the supernatural events turned violent: scratches, burns, and cuts.  There have been apparitions of a small girl, and activities happening in the infant’s room. The little girl is not the only occupant of the house. Often you can hear voices of men, women, and children here. Atchison the most haunted town in Kansas, and this house can prove it. 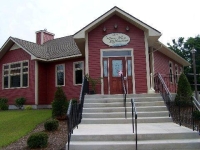 Riverhouse: The Riverhouse resturant has seen its fair share of various businesses. It was built in 1870 and was the headquarters of the Atchison-Nebraska Railroad. Later, it was a brothel, a coffee factory, peanut factory, candy factory, and finally the Riverhouse Restaurant. The brothel and beer house was very popular in Atchison, and both the wealthy and working men would spend their time here. If you go to this restaurant, be prepared to have items fall off your table, hearing heavy footsteps directly behind you, and company on the first floor’s ladies restroom. If you’re lucky, you can catch a manifestation of a woman. 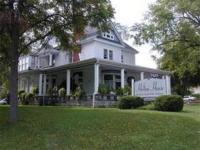 Holton House Bed and Breakfast: Once being a family resident and later a funeral home, the Holton Hotel Bed and Breakfast has some ghostly activity. During the renovation of the bed and breakfast, there would be shadow figures throughout the house, people would hear women’s voices, and even see an apparition of a woman. The Shea Room is the most active room in the house, so make sure you ask to book that room if you want to have a real experience! If you don’t want to stay at the Holton Hotel, be sure to drive by: sometimes you can see a child’s face looking out the attic window.

Stubbs Mansion: Once the home to Lawrence’s Governor William Roscoe Stubbs and now home to the University of Kansas’ Sigma Nu fraternity, this house has a dark history. Governor Stubbs and his wife brought a young girl, Virginia, into their home. As Stubbs and his wife had marriage problems, Stubbs became infatuated with Virginia. The afternoon of April 21, 1911, Stubbs came home and found Virginia hanging by a rope in a closet. Mrs. Stubbs was found sitting in her rocking chair and oblivious to her surroundings. Was this suicide or murder? To this day we do not know. For Sigma Nu, they see a ghostly woman with long hair is seen looking out the window and walking throughout the hallways. The lights flicker, doors slam, and terrifying dreams are experienced by the residnets. Doors without locks lock and trap people until they can be rescued.One student came home one night and saw a light turn on in the closet – a closet with no lights.

Eldridge Hotel: Since 1855, the Eldridge Hotel has been at 7th and Massachusetts Avenue, and was an important place for social and political events. August 21, 1863, William Quantrill and over 400 Missourians approached Lawrence with one goal in mind: to burn Lawrence down, and they succeeded in burning the Eldridge Hotel. In 1865 the Eldridge Hotel was rebuilt. The most notable entity is the “elevator ghost” which will sometimes take you to the fifth floor instead of the floor guests select. Room 506 includes misty handprints on the mirrors, lights flickering on and off, and apparitions in the hallways. Also in the hotel, candles by the fireplace will mysteriously light on their own, the smell of cigar is apparent, and sometimes staff will see a table full of women playing poker in empty rooms. 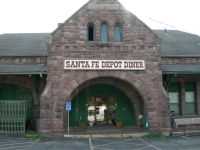 Santa Fe Depot Diner: Built in 1886, the Santa Fe Depot used until 1982, then abandoned. In 1983, the property was purchased and renovated into a restaurant. The most well-known ghost is from a small child. As staff carefully washes glass, small handprints will re-appear on the glass. One explanation of the handprints is mineral deposits, but many others believe the handprints are from the small child that was murdered outside the building over fifty years ago. Other activity includes cold spots, and the sound of footprints, and voices heard throughout the dining area. Staff have noticed the apparition of a woman in a long dress in the dining area before she vanished in the hallway, lights turning off after they’ve been turned on, work carts moving away from them on level ground, water that was running when they were shut off the night before, and objects moved from where they were left the night before.

Delta Sigma Phi Fraternity House: Originally St. Mary’s Parkview Hospital, the Delta Sigma Phi Fraternity House at Kansas State University has its fair share of hauntings. Tragedy struck when the St. Mary’s Parkview Hospital was moving locations, and a patient – George – was left behind. He was weak from illness and fell between the bed and the wall and was stuck. He stayed there for three days, until he finally died. George still remains at the location and continues to haunt the Delta Sigma Phi guys. People experience lights flickering and hearing footsteps on a regular basis. One closet always remains locked, but on a ghost tour in 2008, the door knob started rattling. A resident of the house went to get the key to the closet since the knob kept rattling. When he unlocked and opened the door, no one was there. Another resident came home and discovered the shape of someone lying under his covers. When he went to pull back the sheets, the bed was empty! 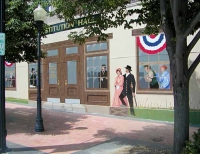 Constitution Hall: Topeka’s oldest and most haunted building is Constitution Hall. Built in 1855, this building was essential to the Free State Movement. In the past, this building was home to a cutlery shop, an undertaker service, a bookshop, and a drug store. The owner of the cutlery shop, Cy Cohen, was murdered there in 1984. It’s said that his ghost remains on the premises. One of the main reasons this building is so active is because during the Spiritualist movement in Topeka, meetings were held in Constitution Hall to perform séances. Paranormal investigators have experienced being tapped on the shoulder, seen shadows darting across the room, and smelled the pungent odor of pipe tobacco. Several entities have been identified: Robert, a little girl named Cissy, Christopher, and the door guard.

Great Overland Station: Established in 1927, the Great Overland Station was essential in World War II when families would watch as their loved ones would go off to war and was a popular stop for the whistle-stop for politicians, including President Dwight Eisenhower. The building is still standing despite flooding and fire. There are several entities that remain on the premises. Visitors can hear a woman crying, papers and supplies move around, and drawers will open and shut on their own. On the balcony, people experience their clothes being tugged at and their ankles pulled. During ghost tours, the tourists have taken pictures of anomalies in the front of the station door, who is a small boy who escaped from a youth center and died while trying to catch a train.

Check out these great resources from TSCPL:

Want to get spooked this year by paranormal locations? Check out these ghost tours!

Do you have any ghost hauntings or legends that you’ve experienced on a ghost tour or a haunted location? Please share, I would love to hear about them!