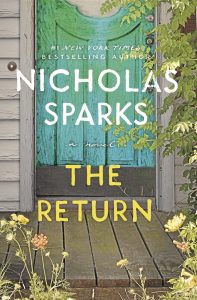 A new Nicholas Sparks book is a reason for celebration! You can count on Sparks for warm feels, authentic characters you can’t help but cheer for, and (for me at least) some tears.

The Return takes readers to a small town in North Carolina. Trevor Benson saved lives in Afghanistan as a Navy doctor until he was injured by a mortar blast. Because of his injuries he no longer has the ability to work as a surgeon. Trevor also struggles with PTSD. He begins therapy to help him cope with shaking, mood swings and nightmares.

At this turning point in his life, Trevor returns to the small town where he spent so many wonderful summers with his grandfather. He inherited the house and land after his grandfather died unexpectedly. Now seems like a good time to get the place fixed up and study to return to school.

Once Trevor is settled in, the mystery of his grandfather’s death tugs at him. Why was his reclusive grandfather on the road in his rickety truck, traveling to a place Trevor has never heard of? What was his grandfather trying to tell him on his deathbed?

His grandfather’s death isn’t the only mystery. There’s also the teenage girl who lives down the road. She’s a guarded, has bruises on her arms and avoids Trevor’s attempts at friendliness. He hears that she connected with his grandfather before his death. However, she denies knowing anything about his final days.

Then there’s Natalie, the beautiful deputy sheriff who seems warm one moment, then withdrawn and reserved in the next. As Trevor searches for answers, his path will take a turn he did not expect.

While you wait for your copy of The Return, check out these books that share themes of romance, veterans, combat and second chances. 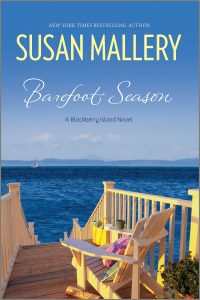 Barefoot Season is the story of a veteran recovering from physical and mental injuries who returns to her childhood home after her father’s death. If you enjoy the romance and character growth of Sparks’s novels, you’ll find plenty to love in this story. It’s available on Hoopla instantly as an ebook, so you don’t need to wait in line.

Michelle was shot in the hip during her third tour of active duty. The pain of her physical recovery is second to the nightmares and flashbacks that just won’t stop.

Her father left her the inn where she grew up. Michelle is determined to manage the business. However, the inn has changed and Michelle does not feel the warm glow of homecoming she expected.

Carly is a single mom who has been working at the inn for the last decade. She loves her work, feels at home at the inn, and wants to see the business succeed. Carly and Michelle were like sisters once, but a betrayal tore them apart. Will they be able to work together to pull the inn back from the brink of financial ruin? Can they ever restore the friendship that once sustained them? You’ll root for both of these flawed, incredible women. 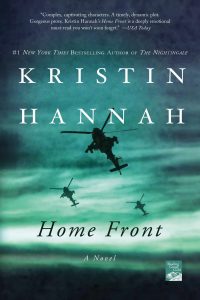 Like Sparks, Kristin Hannah writes novels that explore friendships, family relationships and the impact of secrets. Her powerful stories often move readers to reach for tissues, or to cheer aloud for likeable characters. In Home Front Hannah explores the cost of war through a struggling marriage tested by separation and stress. Check it out instantly in audio on Hoopla.

Michael and Jolene Zarkades have been married for 12 years and the stresses of day-to-day life have taken a toll. Jolene is deployed, leaving Michael to care for their two daughters alone. She hates leaving the girls, but it’s her duty to go when she’s called. In her letters Jolene stays positive and upbeat, but of course war takes its toll.

Michael will be called on to fight his own battle for the sake of the family. Can Michael and Jolene pull through? How will war change their lives and the lives of those they love? 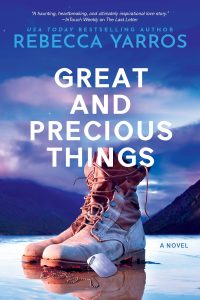 If you’re drawn to small towns and enjoy characters who are finding their way back into life after armed service, Great and Precious Things might be up your alley. Camden Daniels returned from war without his little brother. It seemed that no one in his home town would forgive him. Even his father turned his back on him.

Camden fled, swearing he would never return, even though he left behind the woman he loved. He moved on, putting the pain behind him. Then he receives a message from his father. Camden realizes he must go home and face the past, the pain and the buried secrets. You can check this one out instantly in audio from Hoopla. 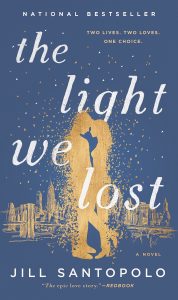 The Light We Lost by Jill Santopolo

The Light We Lost considers the impact of war on flawed, relatable characters as they reach for romance and happiness in the aftermath of 9/11. Lucy and Gabe first meet as seniors at Columbia University. They both want lives of meaning and purpose. A year later fate brings them together again only too briefly.

Gabe follows his passion for photojournalism to the Middle East, while Lucy pursues her career in New York. During the next 13 years they each follow their own paths. They also continue to think about each other and long for a reunion. Are they destined to be together? Does happiness mean taking fate into your own hands? This is a story that will have you reaching for tissues and cheering for love, above all. 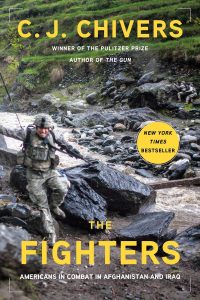 The Fighters by C.J. Chivers

Learn what it’s really like to fight in Afghanistan or Iraq, and how combat affects the men and women who serve. More than 2.5 million Americans have served in Afghanistan or Iraq since September 11, 2001. Chivers has reported from both fronts for more than a dozen years, sharpening his understanding and knowledge about how war is waged today.

The Fighters reviews the history of the war through the experiences of the men and women on the ground, starting with pilots climbing into their cockpits after the 9/11 attacks. Readers go along on the hunt for Osama bin Laden along the Pakistani border and face snipers in Iraq. Everyone who sees combat is changed. Many return home to drastically altered futures, trying to make a new life as they recover from their injuries and learn to live with their scars.