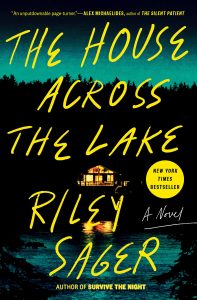 Get ready for a wild ride in Riley Sager’s latest thriller. The House Across the Lake is full of unexpected twists, missing women and haunted happenings. Casey was recently fired from starring in a Broadway show. She’s at her family’s remote lake house in Vermont recovering from her very public fall from grace. Casey spends her days licking her wounds, grieving her husband and drinking way too much.

Tom and Katherine move into the house across the lake, the one with the great big windows. They’re beautiful and interesting. Casey puts her husband’s fancy binoculars to use watching them. She quickly realizes Katherine’s marriage is not as smooth as it appears. Then Katherine vanishes. Casey is sure Tom killed her. She teams up with another lake lodger to prove it.

Appearances can be deceiving and so much can lurk beneath dark water. If you’re looking for a book that will keep you guessing, The House Across the Lake is a sure bet. If you like twists, disappearances and hauntings, you might enjoy the following reads, too.

What You Never Knew by Jessica Hamilton 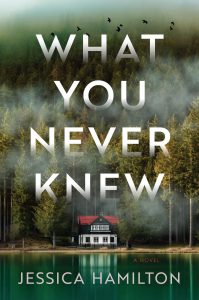 The Bennett family owned idyllic Avril Island and the 100-year-old cottage nestled in the trees on it’s shore. When June Bennett was 12 her father disappeared from the island. June, her older sister May and their mother moved back to New York. Her mother told the girls she sold the island.

Now June is 40. Recently her sister May died in a car accident just a few months after their mother died. June discovers her mother lied about sale and June now owns the cottage and Avril Island. Still reeling from the grief of losing her sister, June travels to Avril Island to find answers.

June learns the townspeople near the island believe her father was murdered. She also begins to notice strange things happening on the island – missing family possessions showing up on her bed and doors open when she had locked them closed. June soon realizes there was a lot happening during her childhood summers at Avril Island that she didn’t notice. Available with no holds as an ebook and digital audiobook.

The Woman in the Window by A.J. Finn 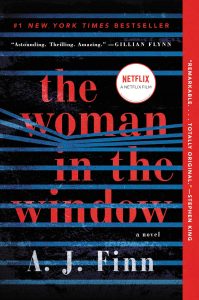 The House Across the Lake and Woman in the Window both pay homage to Hitchcock’s movie Rear Window. In The Woman in the Window, Anna Fox is a recluse in her New York City home. She lives alone and can’t bring herself to venture outside. Anna drinks a lot of wine, watches movies and thinks of happier times. She also spends a good deal of time watching her neighbors.

One night Anna sees something she wishes she hadn’t. Now she may be in danger. Will anyone believe her? Who is in control? This one will keep you guessing. Available with no holds as an ebook and digital audiobook on Hoopla.

The Wrong Family by Taryn Fisher 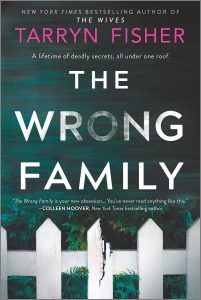 Winnie and Nigel seem to have the perfect marriage, perfect family and perfect life. Juno knows differently, now that she’s living in their house. She knows all of their dirty laundry. One day Juno overhears a conversation between Winnie and Nigel and learns a chilling secret. She knows she shouldn’t get involved in the family’s business. However, it feels like an opportunity to make amends for her own mistakes. Get ready for big twists in this page-turner. Available with no holds as a digital audiobook on Hoopla. 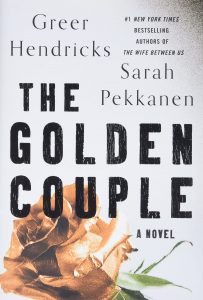 Avery Chambers is an incredibly successful therapist who helps people overcome everything from domineering parents to assault. Marissa and Mathew Bishop seem like the golden couple, except Marissa cheated. She wants to repair things, both because she loves her husband and for the sake of their 8-year-old son. After a friend forwards an article about Avery, Marissa seeks her out for help. When Marissa reveals her infidelity in therapy, all three are set on a collision course. There are bigger secrets in the room and it’s no longer simply a marriage that’s in danger.

Lock Every Door by Riley Sager 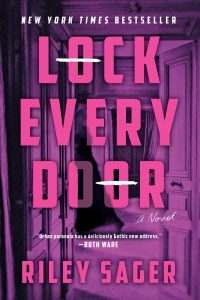 After being dumped by her boyfriend Jules is broke and needs a place to live. She thinks her luck has changed when she gets a job as an apartment sitter at an exclusive building in Manhattan. There are a lot of rules, it’s true. No visitors. No nights spent away from the apartment. No disturbing the other residents, all of whom are rich or famous or both.

Ingrid is a fellow apartment sitter who believes the Bartholomew is not what it seems. Jules brushes off Ingrid’s fear, but then Ingrid disappears. As Jules learns more about the building’s history and secrets, she begins to understand why Ingrid was so scared. She also realizes she might be the one to disappear next.