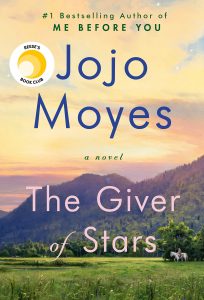 In the 1930s Kentucky launched a program to get books into the hands of poor rural residents, many of whom lived in the mountains. Librarians on horseback carried reading material for miles over rugged terrain and delivered education and entertainment right to the doors of the folks who needed it most. The program was part of Roosevelt’s Works Progress Administration, which created paying jobs. In one swoop, this New Deal program brightened lives, gave rural residents access to educational materials and gave women a way to support themselves doing meaningful work.

The Giver of Stars is the story of one small town’s pack horse library program. The women who work for the program stand up against censorship, racism and greed to keep it going. The town’s residents are complex, strong people, whose lives are changed by access to reading material and their relationships with the librarians. The book also makes it clear that the work of a pack horse librarian was hard, physical labor, requiring hours on horseback each day, in all weather. The librarians bond through the work and warm friendships add light to their lives. As the community is enriched through literacy, the women undergo their own transformations. They each gain confidence, joy and physical strength as they push themselves to the limits and beyond. Bonus, the audiobook narrated by Julia Whelan is fantastic!

If you’re waiting for your copy, here are some titles to keep you busy. If you read The Giver of Stars and loved it, you might enjoy these books on similar themes.

The Book Woman of Troublesome Creek by Kim Michele Richardson 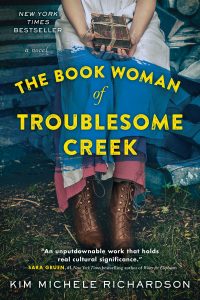 This is the most obvious read-alike for The Giver of Stars because both books are inspired by the pack horse librarian program in Kentucky. Richardson tells a very different story though, so both are worth a read. Cussy is one of the last of the blue people of Kentucky, a group I had never heard of before. Due to a hereditary condition, the blue people had actual blue skin, and were treated as “colored.” Cussy is a strong, daring women who takes on the job of pack horse librarian. Her story and journey is shaped from the outset by the color of her skin and how her difference sets her apart in her community. The Book Woman of Troublesome Creek describes the extreme poverty of many of the people served by the pack horse library. There are difficult, memorable scenes of families living hard lives. You’ll find inspiration in this story of a young woman’s journey to self-acceptance and fulfillment. Available instantly on Hoopla! 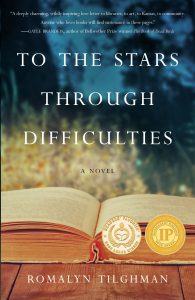 To the Stars Through Difficulties by Romalyn Tilghman

Romalyn Tilghman’s novel is a love letter to libraries and librarians. It’s also a story of friendship and camaraderie between strong women. Three women from different parts of the country come together in modern day New Hope, Kansas. Traci is a New York artist, hired to teach classes at the struggling arts center. Angelina is a PhD student researching Carnegie libraries in the town her grandmother called home. Gayle’s hometown was decimated by a tornado. She’s drawn to New Hope to sew and craft while she deals with her grief. As the three women tackle art projects to raise funds for the arts center, they share their stories and unravel the mysteries of the past. They all discover their true strength and direction.

This compelling story of friendship and empowerment is enriched by the history of Kansas and Carnegie libraries. Tilghman’s work was inspired by research into Carnegie libraries built in the early 1900s and local arts agencies formed later in the century. She notes that strong women played a big role in bringing arts to the plains.

“Many Kansas women came from the East and cities where cultural opportunities were more prevalent,” Tilghman said. “Women missed their books and operas, and, equally important, they were bound and determined to provide more opportunities for their children. Books provided escape from dust and drudgery and provided a glimpse of the outside world.” Read the full interview with the author.

If you’re like me, you see a lot of potential for a book group discussion in this novel. Reserve the Book Group in a Bag Kit to check out 10 titles and a discussion guide for your group.

The Badass Librarians of Timbuktu by Joshua Hammer 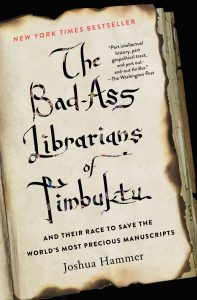 If you need more proof that librarians are strong and fierce, look no further than this nonfiction account of librarians who put their lives on the line. In the 1980s a young adventurer and collector for a government library, Abdel Kader Haidara, journeyed across the Sahara Desert and along the Niger River. He tracked down and salvaged tens of thousands of ancient Islamic and secular manuscripts that had fallen into obscurity. This is an incredible story of how Haidara, a mild-mannered archivist and historian from Timbuktu, became one of the world’s greatest and most brazen smugglers.

In 2012, thousands of Al Qaeda militants from northwest Africa seized control of most of Mali, including Timbuktu. They imposed Sharia law, chopped off the hands of accused thieves, stoned unmarried couples, and threatened to destroy great manuscripts. Haidara organized a dangerous operation to sneak all 350,000 volumes out of the city to the safety of southern Mali. Journalist Joshua Hammer explores the city’s manuscript heritage and offers never-before-reported details about the militants’ march into northwest Africa. This is an inspiring account of the victory of art and literature over extremism. Available instantly in audiobook on Hoopla.

The Girl You Left Behind by JoJo Moyes 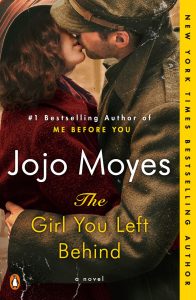 If you’re intrigued by the author’s most recent novel, you might enjoy checking out some of her other work while you wait. Moyes is probably best known for her bestseller Me Before You, and the other two books about Louisa Clark that followed. I love all three, myself! The Girl You Left Behind is historical and features another strong female lead. The story begins in occupied France during WWI, where Sophie is waiting for her husband to return from the front. She is forced to lodge a German officer in her home. He is very drawn to a portrait her husband painted of her.

Flash forward to 2006. A young woman is grieving her husband. Her favorite object in the world is a painting he gave her. When the family of the painter sues for the piece, she and a new love research the painting, uncovering a story long forgotten. It’s hard to read about prisoners of war, and what people give up to help others. However this story is also valuable, redeeming and inspiring. There is a lot of light at the end of the tale.

Among Others by Jo Walton 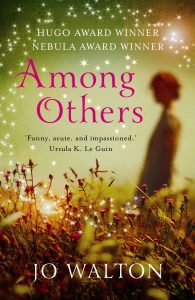