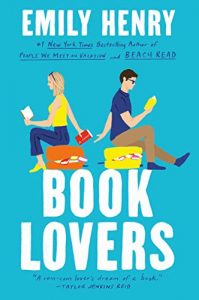 It may not be summer on the calendar just yet, but summer reading is officially a go! If you’re a romance fan, the newest Emily Henry novel deserves a spot on your summer to-be-read list. Book Lovers is the compelling, feel-good book readers expect from Henry. It’s a love letter to the small-town romance trope, but also turns that trope on its head and gives the city girl a win for once.

Nora Stephens is a shark. Ok, not really, but in the publishing world she has established a reputation as a cutthroat literary agent. Nora will do anything to get her clients the deals and treatment they deserve. She often feels like a character in a romance novel, but never the heroine. Nora’s the big-city career woman who gets dumped when her boyfriend spends time in a small town and decides to stay. She’s the cold, detached woman who gets the contract but loses the man.

Nora’s sister, Libby, is married with kids and currently pregnant. Nora has been like a mom to Libby since they lost their own. When Libby begs her to spend the summer in a small town to help her relax, Nora agrees to work remote and devote her evenings and weekends to her sister. Libby even comes up with a list of to-do’s to help them experience the small-town romance effect they’ve read about. They’ll wear flannel, go on dates with locals, and save a struggling small business, of course.

It turns out, there’s a literary editor spending his summer in the same small town. Nora met Charlie Lastra before and it didn’t go well. She sees Charlie as a romance novel trope, too—the handsome but cold grouch, “the worst parts of Mr. Knightley.” Of course, Nora and Charlie actually have a lot in common. If they get to know each other, could they finally find their own happy endings? Will they have to give up their hard-earned success to find love?

Book Lovers is a perfect summer read. A small-town, enemies to lovers romance that celebrates independent women, strong men, and the wonderful ways the two can come together. Bonus trivia: Nora is named for Nora Ephron, the genius writer behind When Harry Met Sally, Sleepless in Seattle, You’ve Got Mail and more. While you wait to turn these delightful pages, check out these novels of small town romance, book love and laughs.

The Hating Game by Sally Thorne 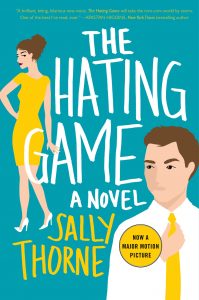 More enemies to lovers set in the publishing world—perfect! Lucy Hutton and Joshua Templeman are executive assistants to the CEOs of a big publishing company. They couldn’t be more different. Lucy is bright and chatty, five-feet tall and feisty. Joshua is all height, serious facial expressions, and boring business clothes.

Lucy has always seen herself as a nice person who gets along with everyone, but for some reason Joshua really gets under her skin. When the two are put up for a big promotion, the claws come out and the games begin. The staring game. The “How are you? game. The mirror game. As the competition intensifies, Lucy feels frustrated in more ways than one. You won’t want to put this one down! Available with no holds as an ebook or audiobook on Hoopla.

If you’ve already read this one, check out the new movie. 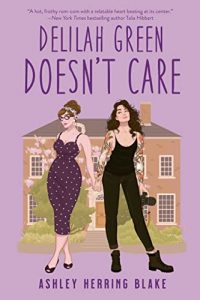 I absolutely adored this sapphic, small-town rom-com about friendship, family and second chances! Get ready to fall in love with a cast of quirky, flawed, relatable characters.

Delilah moved on from her hometown of Bright Falls, and from the stepmother and stepsister who made her feel unwanted and unseen after her dad died. Unfortunately, living as an artist in New York City is expensive, so she accepts a very well-paid gig as her stepsister’s wedding photographer.

On Delilah’s first night back in town she runs into Claire, her high school crush and one of her stepsister’s best friends. Sparks fly but it’s complicated. Claire has been raising a strong-minded daughter alone while also running the local bookstore. She’s protective of her heart and of her daughter.

Delilah is all about the casual hook-ups and has no interest in a long-term relationship with anyone, especially not her stepsister’s soft-hearted bestie. Since it’s not a good fit for either of them, they’ll just walk away, right? Ha, you know better. Love doesn’t listen to reason. So buckle up and enjoy the ride. Don’t worry, book 2 in the Bright Falls series will be published this November.

Meet Me in the Margins by Melissa Ferguson 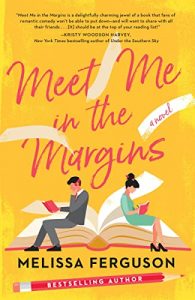 This is a bookish rom-com described by the publisher as “You’ve Got Mail meets The Proposal.” Savannah Cade is an editor for a literary publisher, the sort that looks down on genre fiction. She’s also a writer with a secret romantic manuscript. One of the most sought-after romance publishers in the country is interested in taking a look. Savannah isn’t ready to reveal her work to her literary snob colleagues. When she drops her manuscript during a staff meeting, she panics and hides her manuscript in the secret turret room of the old Victorian office.

When Savannah comes back to her papers, she finds critical notes written in the margins. These comments turn out to be very similar to those she receives from the romance editor who reviews her work. Savannah starts turning to the secret editor for more, and the two begin corresponding through the margins of her passion project. Soon Savannah is thinking as much about the person behind the comments as the book itself. She could be falling for him. But who is he? Available with no holds as an ebook and audiobook on Hoopla. 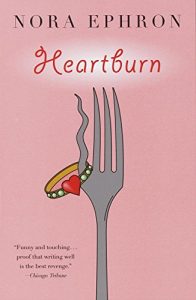 If you love romantic comedies and you haven’t read Nora Ephron, add her to your summer reading list! Her essays are hilarious. Or check out the short novel Heartburn originally published in 1983. Ephron also wrote the screenplay for the movie version of the story.

Rachel Samstat is 7 months pregnant when she discovers her husband, Mark, is in love with another woman. Rachel writes cookbooks for a living. Food becomes an important coping mechanism and distraction. Rachel is torn between wanting her husband back and wanting him dead. Her journey to a decision is as hilarious and satisfying as you would expect from the author of Sleepless in Seattle. Feeling like a movie night? Check out the 1986 film starring Meryl Streep and Jack Nicholson.