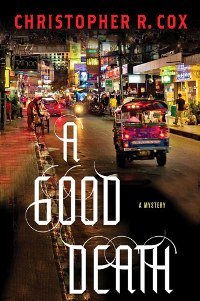 Linda Watts was an American success story as a refugee from Laos who went to a prestigious college, had a promising career, and was recently engaged to be married. Her life seemed to be on the road of continued successes until she broke off her engagement and went to Thailand where later she was found dead from a drug overdose in a seedy motel. Her death would have not been investigated fully except for the large payment from a life insurance policy and the insurance company, sensing a scam, hired private investigator, Sebastian Damon, to find the evidence that Linda is still alive.

When Sebastian arrives in Thailand all the paperwork and evidence of Linda’s death is in order, but the authorities stonewall him and give veiled threats. It doesn’t make sense especially since it seemed that Linda did die until Sebastian stumbles upon a clue that may break the case and his life in A Good Death by Christopher R. Cox. This debut mystery novel is rich in detail about Thailand as Sebastian follows his leads into the underbelly of the nightclubs and out into the countryside.