My top five picks of September new books will enchant you with their cleverness, wit and heart. The Inheritance of Orquídea Divina is an engrossing novel about what we knowingly and unknowingly inherit from our ancestors, the ties that bind and reclaiming your power. My next pick Fault Lines is a witty debut novel that explores marriage, motherhood, love and our sense of self. In Under the Whispering Door you’ll find a delightful, heartfelt and hilarious fantasy about second chances. Bewilderment is full of descriptions of the natural world and a tantalizing vision of life beyond centered around a father and son’s ferocious love. In Cloud Cuckoo Land Anthony Doerr creates a tapestry of times and places that reflects our vast interconnectedness — with other species, each other, those who lived before us and those who will be here after we’re gone.

1. The Inheritance of Orquídea Divina by Zoraida Córdova 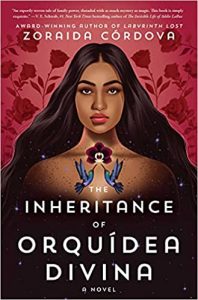 The Montoya family is accustom to not questioning the unusual. They don’t ask why their pantry is never empty or why their matriarch Orquídea Divina never leaves their home.

They hope to learn her secrets when Orquídea invites them to her funeral and to collect their inheritance. Instead they are left with more questions when Orquídea is transformed.

Seven years later, her gifts have manifested in different ways for Marimar, Rey, Tatinelly and Rhiannon, granting them unexpected blessings. But soon a hidden figure begins to tear through their family tree. This figure is picking them off one by one as it seeks to destroy Orquídea’s line. Determined to save what’s left of their family and uncover the truth behind their inheritance, the four descendants travel to Ecuador. This is the place where Orquídea buried her secrets and broken promises, and never looked back.

Alternating between Orquídea’s past and her descendants’ present, The Inheritance of Orquídea Divina is an enchanting novel about what we knowingly and unknowingly inherit from our ancestors, the ties that bind and reclaiming your power.

“Spellbinding! What a pleasure getting to know the Montoyas over generations and landscapes—from Ecuador to New York City to the mythical small town of Four Rivers. Zoraida Córdova’s undeniable storytelling gift feels propelled by the power of ancestors. These larger-than-life characters embrace like family. An immersive and enchanting treat.” – Kali Fajardo-Anstine, author of National Book Award finalist Sabrina & Corina 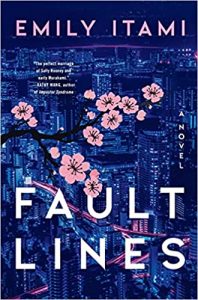 This witty debut novel explores marriage, motherhood, love and our sense of self. Mizuki is a Japanese housewife who has everything a woman could want. She has a hardworking husband, two adorable kids and a beautiful Tokyo apartment. However, sometimes Mizuki thinks she would rather throw herself off the balcony than spend another evening not talking to her husband and hanging laundry.

One night she meets Kiyoshi, a successful restaurateur. Through a relationship with him she rediscovers freedom, friendship and the excitement of the city. The more she sees Kiyoshi the more she realizes she can’t live two lives – she must choose one

“Fault Lines manages to be clever, wise, and heartbreaking all at once — the book is the perfect marriage of Sally Rooney and early Murakami, with a unique insight into marriage, motherhood, and warring cultural expectations that is all Emily Itami’s own. Absolutely brilliant.” – Kathy Wang author of Impostor Syndrome

3. Under the Whispering Door by TJ Klune 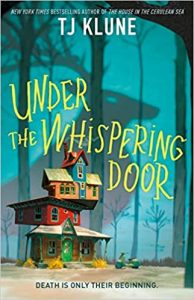 For everyone who loved The House in the Cerulean Sea, Klune is back with another hilarious and uplifting story!

“When the frankly awful Wallace dies unexpectedly, he comes to the attention of Hugo, a teashop owner who ferries the dead to the other side of life. Wallace is a difficult case, but gentle Hugo gives Wallace a chance to come to grips with his predicament, opening up his eyes to love, beauty, and the absurdities that make every moment special. This heartfelt story about a man who discovers the joys of living after he is dead is one that you’ll hand to a good friend with a smile and a hug.” —Adrian Liang, Amazon Editor 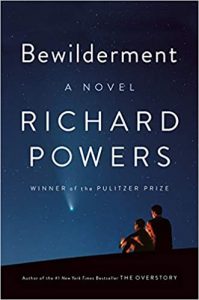 Astrobiologist Theo Byrne is searching for life throughout the cosmos. He’s also raising his unusual 9-year-old, Robin, following the death of his wife. Robin is generally warm and kind. He spends hours painting elaborate pictures of endangered animals. However, Robin is also about to be expelled from third grade for punching his friend in the face.

As his son grows more troubled, Theo hopes to keep him off psychoactive drugs. Tho learns of an experimental neurofeedback treatment to bolster Robin’s emotional control. This treatment involves training Robin on the recorded patterns of his mother’s brain.

The story is full of descriptions of the natural world and a tantalizing vision of life beyond. This is all centered around a father and son’s ferocious love. At its heart lies the question: How can we tell our children the truth about this beautiful, imperiled planet?

“Soaring descriptions and forthright observations about our planet…. Offers rich commentary on the complex, often mystifying intersections between science, popular culture, and politics…. As the best-selling The Overstory continues to reverberate, readers will be excited to turn to another deeply involving Powers novel.” ― Booklist starred review 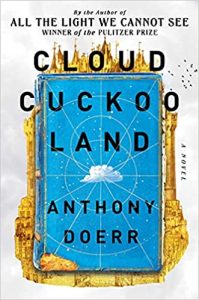 This tale is set in 1453 Constantinople, in a small town in present-day Idaho, and on an interstellar ship decades from now. This is a story about children on the cusp of adulthood in worlds in peril, who find resilience, hope and a book.

Anna is a 13-year-old orphan living inside the formidable walls of Constantinople. Restless and insatiably curious, Anna learns to read. She finds the story of Aethon who longs to be turned into a bird so he can fly to a utopian paradise. She reads this to her ailing sister as the walls around her are bombarded in the great siege of Constantinople.

Five hundred years later in a library in Idaho children are rehearsing a play adaptation of Aethon’s story. Against all odds this story has been preserved through centuries. Tucked among the library shelves is a bomb, planted by a troubled, idealistic teenager. This is another siege.

In a not-so-distant future, on an interstellar ship, Konstance is alone in a vault. She is writing the story of Aethon that her father told her. Konstance has never set foot on our planet.

“Doerr reminds us yet again, with urgent relevance, of what we have in each other and our beautiful Earth. Gorgeously written, Cloud Cuckoo Land is rich in metaphor and message, but as befits a novel that inherently celebrates the power of story, it is also simply and delightfully entertaining!” –Sara Hinckley, Hudson Books