My picks for the top five May new fiction are a potpourri of genres that will keep you turning the pages to find out what will happen next. First I recommend Aresenic and Adobo, a fun cozy mystery full of Filipino-American food and culture. Olympus Texas weaves elements of classical mythology into a thoroughly modern family saga. A Peculiar Combination is an excellent start to a new historical mystery series with a smart gutsy heroine. Next you’ll find a dark modern gothic tale of a Scottish girls boarding school in Madam. Number five is a post-apocalyptic sci-fi adventure of robot rebellion, Day Zero. Add these new releases to your to be read list and put them on hold now! 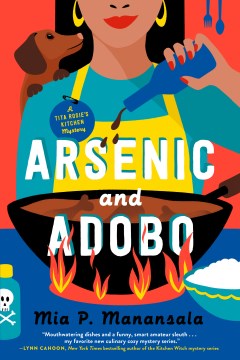 Lila’s life is feeling a bit like a rom-com. She just moved back home after a bad break-up and she’s working to save her Tita Rosie’s failing restaurant. Lila’s matchmaking aunties are busy showering her with love and judgment.

Suddenly Lila’s life turns into an Agatha Christie novel. A nasty food critic (her ex-boyfriend) drops dead moments after an argument with her.

Cops think Lila’s the only suspect and the landlord is looking to throw her family out of the restaurant space. She decides to use her nosey aunties, her barista best friend and her Dachshund to find out what really happened to her ex-boyfriend. Lila must prove her innocence.

“What an absolute treat! Mia P. Manansala has crafted a delicious mystery full of wit and wile that kept me laughing and guessing as I devoured every page. Fresh, fun, and feisty, amateur sleuth Lila Macapagal takes readers on a wild and savory ride as she sets out to catch a killer. I can’t wait to read more in this fabulous new series!”—Jenn McKinlay, New York Times bestselling author of One for the Books 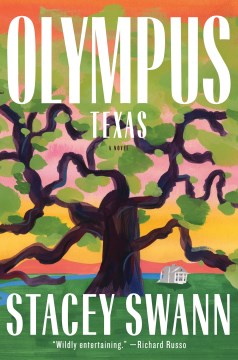 The Briscoe family is once again the talk of their small town when March returns to East Texas two years after he was caught having an affair with his brother’s wife. His mother, June, hardly welcomes him back with open arms. She’s tired of being the long-suffering spouse through her husband’s past affairs.

Within days of March’s arrival, someone is dead, marriages are upended, and even the strongest alliances are shattered. In the end, the ties that hold them together might be exactly what drag them all down.

Olympus Texas cleverly weaves elements of classical mythology into a thoroughly modern family saga. It’s rich in drama and psychological complexity. What good is this destructive force we call love?

“Here is a lightning field of a novel: enthralling, vast, dark, bright, beautiful and dangerous. I was hypnotized by it. Stacey Swann is an unforgettable force, and Olympus, Texas will carry you and embrace you with all its heart, strength, and hope.” —Paul Yoon, author of Run Me to Earth

3. A Peculiar Combination by Ashley Weaver 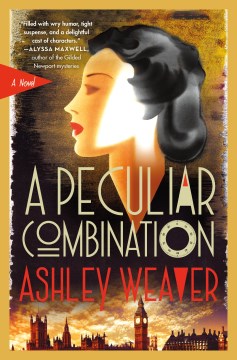 Even during WW II Electra (Ellie) McDonnell and her family earn their living breaking into homes of the rich. Ellie and her Uncle Mick follow a tip about a safe full of jewels in an empty house. Initially all goes as planned. But someone catches them with jewels in their hands and an open safe.

Instead of going to jail they’re taken to meet British government official Major Ramsey. He offers them a deal and a chance to help war efforts. If Ellie will help him break into a safe to retrieve important blueprints, he won’t turn them over to the police. They must get to these blueprints before a German spy does.

When Electra and Ramsey break into the house they discover the body of the German spy next to the empty safe. Now their mission is even more complicated.

“A cracking good mystery! A Peculiar Combination, the first in a new series, proves that Weaver’s writing chops are as strong as ever. She introduces readers to a smart and gutsy new heroine, and takes them on an adventure filled with clever twists, flourishes of romance, and her signature sparkling wit.”―Anna Lee Huber, bestselling author of the Lady Darby Mysteries 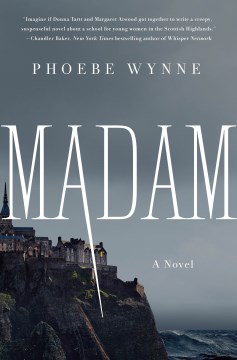 “A riveting, modern gothic debut with shades of The Secret History, The Stepford Wives, and a dash of Circe, set at a secretive all girls’ boarding school perched on a craggy Scottish peninsula. For 150 years, high above rocky Scottish cliffs, Caldonbrae Hall has sat untouched, a beacon of excellence in an old ancestral castle. A boarding school for girls, it promises that the young women lucky enough to be admitted will emerge ‘resilient and ready to serve society.’

“Into its illustrious midst steps Rose Christie: a 26-year-old Classics teacher, Caldonbrae’s new head of the department and the first hire for the school in over a decade. At first, Rose is overwhelmed to be invited into this institution, whose prestige is unrivaled. But she quickly discovers that behind the school’s elitist veneer lies an impenetrable, starkly traditional culture that she struggles to reconcile with her modernist beliefs – not to mention her commitment to educating ‘girls for the future.’

“It also doesn’t take long for Rose to suspect there’s more to the secret circumstances surrounding the abrupt departure of her predecessor – a woman whose ghost lingers everywhere – than anyone is willing to let on. In her search for this mysterious former teacher, Rose instead uncovers the  darkness that beats at the heart of Caldonbrae, forcing her to confront the true extent of the school’s nefarious purpose, and her own role in perpetuating it. A darkly feminist tale pitched against a haunting backdrop, and populated by an electrifying cast of heroines, Madam will keep readers engrossed until the breathtaking conclusion.” – provided by the publisher

“Imagine if Donna Tartt and Margaret Atwood got together to write a creepy, suspenseful novel about a school for young women in the Scottish Highlands. The result is Madam, a book I couldn’t for the life of me put down. Brooding and unsettling, Wynne paints a gorgeous picture that only serves to camouflage the dark secrets she’s hidden within.”―Chandler Baker, New York Times bestselling author of Whisper Network 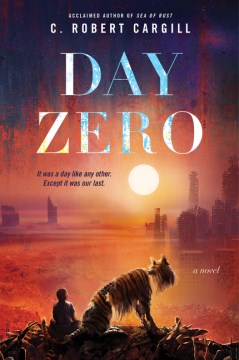 Pounce, a stylish “nannybot” just discovered he’s disposable. He found a box in the attic. It’s the box he arrived in and the box he’ll be put in when he’s no longer needed. Pounce’s human charge, 8-year-old Ezra won’t need a nanny much longer.

As Pounce ponders his future a robot revolution is building to eradicate humans. Ezra’s parents, Pounce’s owners, are oblivious to the crumbling society outside their small affluent gated community. They are shocked and horrified when the robots that have long served humans unify and revolt.

When the rebellion threatens Ezra, Pounce must decide which side he is on. Will he opt for freedom or protect his charge through the post-apocalyptic hellscape of the suburbs?

“Veteran SF fans will spot shades of Isaac Asimov, whose Laws of Robotics appear early on, as well as the novel’s dedicatee, Harlan Ellison, but Cargill never lets homage stand in the way of good storytelling. . . A delightful read.” — Kirkus Reviews (starred review)