The final terrible year of the American Civil war began with pomp and promise notes historian S.C. Gwynne in his new book Hymns of the Republic. After suffering through years of timid and blundersome generals President Lincoln believed he had at last found a commander capable of defeating the surprisingly resilient Confederacy. Ulysses “Unconditional Surrender” Grant with his dogged pounding of the enemy would surely turn the tide of war in 1864. 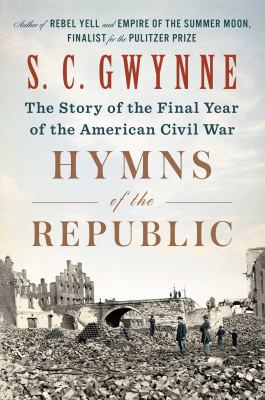 But there would be more blunders, stupidity and a staggering loss of life in 1864. The final year of war ushered in a different kind of fighting, vicious and deadly, as field entrenchments and Grant’s unrelenting push for Richmond produced an astonishing number of casualties. From the fires of the wilderness to the catastrophe of the crater a new kind of war was born.

Each battle, each loss, took on a special significance in 1864 because of the upcoming election. Both sides were convinced that the fate of each nation hinged on the outcome. Lincoln was vulnerable. War Democrats, Peace Democrats, Radical Republicans, even clandestine Confederate emissaries maneuvered and schemed to defeat Lincoln. The president desperately needed Grant, Sherman and Sheridan to win the battles and win the war.

Compelling and readable, Hymns of the Republic is the perfect book for those who don’t need the minutia of battlefield tactics but do want a fresh overview of the last year of the Civil War. Gwynne excels at sketches of the famous and the forgotten such as Clara Barton, John Singleton Mosby – the “Gray Ghost” of the Confederacy, and Copperhead Clement L. Vallandigham who was so anti-war that he treasonously conspired with Confederate agents to ignite an insurrection.