The kids on school bus number 6 in Yamhill, Oregon, had promising futures: good paying jobs, college, marriage and a house seemed within reach for these working-class kids in the 1970s. Their parents had done better than generations before, so surely these kids would have it even better. Yet authors Nicholas Kristoff and Sheryl WuDunn begin Tightrope with a devastating litany of losses – classmates of Kristoff who by 2018 were dead because of alcohol abuse, drug overdoses or suicide. 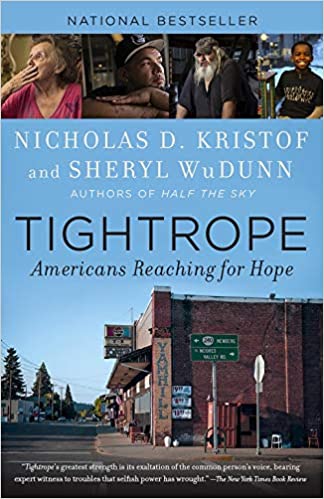 What happened to the kids in Yamhill and to the promise of a better life for kids across America? In Tightrope, Kristoff and WuDunn explain how these “deaths of despair” are a consequence of policy choices made by the United States in the last 40 years. As priorities shifted to helping big businesses and fighting the war on drugs, manufacturing plants closed, drug crimes kept people in prison, inequality grew, health care became inaccessible and the poor were demonized. Without hope or help, whole families, generation after generation, were decimated by alcohol and drug use, obesity and diabetes.

Tightrope portrays an America that is exceptional, exceptionally bad in how we treat childhood poverty, health care, addiction and education compared to other countries. Kristoff and WuDunn believe America can do better. Often discouraging, infuriating and even grim, Tightrope is nevertheless an important, eye-opening look at the crisis in working-class America. The kids on school bus number 6 had bleak lives and lonely deaths because of poor choices and bad policies. However, Tightrope also offers solutions so all Americans can have the promise of a better life.