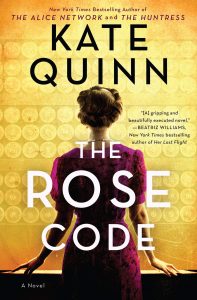 Kate Quinn’s done it again! The author of The Alice Network and The Huntress is one of the hottest voices in historical fiction. Her new novel The Rose Code tells the story of three women who serve in Bletchley Park during World War II. Like Quinn’s previous novels, the book blends research and detail with the tightly plotted action of a thriller and hints of mystery. You won’t be able to stop turning the pages, and you might need a friend to scream-text with as you make your way through the twists and secrets.

Osla, Beth and Mab all have reasons to prove themselves as they do their bit for England during World War II. The book begins after the war as England prepares to celebrate the royal wedding of Queen Elizabeth and Prince Phillip. It flashes back and forth between wartime and post-war England, gradually adding pieces until we see the whole picture.

Osla comes from a wealthy background and wants to show she is more than a “dizzy Deb.” Mab wants to help her family and find a husband who will secure their financial future. Beth is under the thumb of a controlling, abusive mother, and needs to get away to begin her own life. All three end up working at Bletchley Park where they help the Allies win the war through translation, code-breaking and transcription. The challenges, responsibilities and friendships they form will change their lives forever. The Rose Code is a story of strength, triumph and the power of women.

Check out these books for more stories of smart, courageous women who put their lives on the line for family, country and each other. 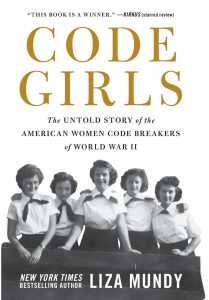 Code Girls is the story of the American women who cracked key Axis codes, helping to secure Allied victory and revolutionizing the field of cryptanalysis. More than 10,000 women served as codebreakers during World War II. Their work saved lives and gave them an opportunity to tackle meaningful work.

Because they were sworn to secrecy, many returned to their expected roles as wives and mothers, and never spoke of their experiences. Mundy conducted extensive research and even interviewed surviving code girls to tell their story of wartime bravery and savvy.

The Leper Spy by Ben Montgomery 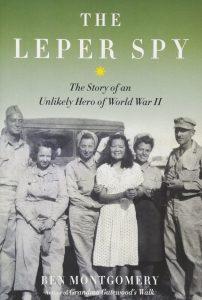 One of the top spies for the Allies during World War II was Josefina Guerrero, a young Filipina woman suffering from leprosy. Because she was ill, Japanese soldiers were too repulsed to search her. She was able to smuggle maps and explosives, and to relay information to the Allies about the movement of troops.

During the Battle of Manila, Guerrero walked through gunfire to bandage wounds and close the eyes of the dead. She was awarded the Medal of Freedom, and enjoyed some notoriety after the war. Then her story fell between the cracks of history until now. The Leper Spy is available instantly as an ebook or audiobook on Hoopla.

The Girl You Left Behind by JoJo Moyes 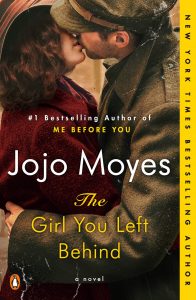 Many know Moyes for her contemporary relationship fiction, but she has also written powerful historical work. This story begins in occupied France during WWI. Sophie is waiting for her husband to return from the front. She is forced to lodge a German officer in her home, and he is very drawn to a portrait of her that was painted by her husband.

The story then flashes forward to 2006. A young woman treasures a painting her deceased husband gave to her. When the family of the painter sues for the piece to be returned, she and a new love work to find the truth of the painting. They uncover a long forgotten story. This is a hard read in many ways, but also inspiring, hopeful and unforgettable.

The Princess Spy by Larry Loftis 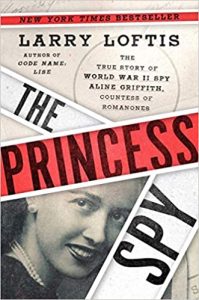 Like Osla in The Rose Code, Aline Griffith came from high society and a monied background. As the U.S. entered WWII, she was a college graduate desperate to do something to help. After a chance meeting she joined the Office of Strategic Services, which was a forerunner of the CIA.

Griffith began work as a coder. Her supervisors soon realized she could mingle with high-ranking officials, diplomats and titled Europeans to find information and sniff out spies. Griffith’s story is full of twists, danger and intrigue, along with a little romance. The book is all the more powerful because it’s true.

The Nightingale by Kristin Hannah 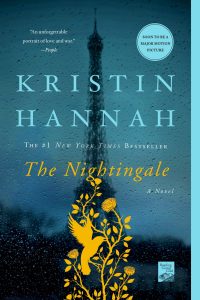 This is one of the most powerful World War II novels  I have ever read! It’s beautiful, wrenching and hopeful. The Nightingale is a story of the women’s war in occupied France.

Vianne is forced to board a German solider in her home while her husband is fighting on the front. She wants to defy the Germans, but she must think about her young daughter. Vianne is forced to bear the intrusion if she wants her family to survive.

Her younger sister, Isabelle, is 18 years old and full of fire. She joins the resistance, risking her life to save others and free her country. The Nightingale was a massive bestseller and has high star ratings with hundreds of thousands of reviews on Goodreads and Amazon. The book has stayed in constant circulation at our library. See what all the fuss is about with the audiobook from Hoopla, available instantly.