I’m wrapping up the year recommending powerful new books with mystery, thrills, insight, hard-hitting truths and action. Death Under the Perseids is an evocative mystery set in Havana where the main cast of four dwindles to just one. One of Library Journal’s top winter debuts, The Ballerinas explores ambition, the complexities of female friendships and the struggle for artistic perfection. They Can’t Take Your Name is a unforgettable story of injustice and bias in the criminal justice system. Juhea Kim tells an epic story of love, war and redemption set against the backdrop of the Korean independence movement in Beasts of a Little Land. W.E.B. Griffin Rogue Asset is an action-filled thriller centered around the kidnapping of the U.S. Secretary of State and the two agents working to get him back. Read on to learn more about December’s top new fiction.

1. Death Under the Perseids: A Havana Mystery by Teresa Dovalpage 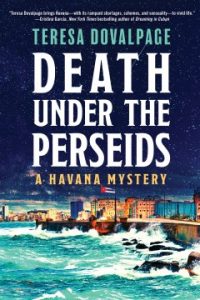 Cuban-born Mercedes and her American husband, Nolan, win a five-day cruise to Cuba. She thinks the circumstances around the prize are a little suspicious. However, a vacation would be a good opportunity to work on her marriage. It would also be a nice break from Nolan’s job hunting. On the cruise Mercedes runs into two people she met through her ex-boyfriend. Selfa Segarra, a former University of Havana professor, and Javier Jurado, a struggling Spanish writer. Strangely they also won this free cruise.

Mercedes and Javier begin to think it’s not a coincidence they are on the same cruise when Selfa goes missing the first day at sea. Nolan convinces Mercedes her suspicions are unfounded. Soon after the ship docks in Havana Javier dies under mysterious circumstances and Mercedes can’t find Nolan.

“Sharply-plotted, highly readable, evocative, and timely – Teresa Dovalpage’s latest is her best yet. Death Under the Perseids is an author at the top of her game, and a must-read for mystery fans who love great locations paired with even better characters. I couldn’t put this book down.” –Alex Segura, acclaimed author of the Pete Fernandez Miami Mystery series

2. The Ballerinas by Rachel Kapelke-Dale 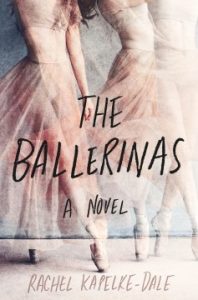 Thirteen years ago Delphine gave up her prestigious soloist position at the Paris Opera Ballet for a new life in St. Petersburg. She left with a secret that could destroy the lives of her best friends and fellow dancers Lindsay and Margaux.

At 36 Delphine returns to Paris to choreograph a ballet she hopes will kick start the next phase of her career. She’s also hoping to make amends with her former friends. However, things have changed while Delphine has been away and she discovers some secrets can’t stay buried.

“Forever shaped by their friendship and the most grueling art form in the world, three friends navigate love, secrets, ambition and the pursuit of artistic perfection within the hallowed walls of the world’s most prestigious ballet school and company. Engrossing, deft and insightful, I loved The Ballerinas – from its provocative opening pages, to its blistering climax, to its exactly right final scenes.” –Cathy Marie Buchanan, New York Times bestselling author of The Painted Girls and Daughter of Black Lake

3. They Can’t Take Your Name by Robert Justice 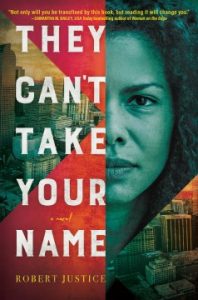 What happens to a deferred dream – especially when an innocent man’s life hangs in the balance? Langston Brown is running out of time and options to clear his name and escape death row. Wrongfully convicted of the gruesome Mother’s Day Massacre, he prepares to face his death. His final hope for salvation lies with his daughter, Liza. She’s an artist who dreamed of a life of music and song. However, Liza left Julliard to pursue a law degree and clear her father’s name. Just as she nears success, it’s announced that Langston will be put to death in 30 days.

In a desperate bid for her father’s freedom, Liza enlists the help of Eli Stone. Devastated by the tragic loss of his wife, Eli is trying to find solace by reviving his jazz club.

Everyone has a dream that might come true. As the dark shadows of the past converge, could Langston, Eli and Liza be facing a danger that could shatter those dreams forever?

“A gripping, powerful, moving story of hope and determination, and the unwavering strength to right a wrongful conviction before it’s too late. Robert Justice’s remarkably fluid, lyrical writing is unflinching in its exposure of hard-hitting truths, life after loss, and racial injustice, told through the compelling stories of three interconnected characters. Not only will you be transfixed by this book, but reading it will change you.” –Samantha M. Bailey, USA Today and internationally bestselling author of Woman on the Edge

4. Beasts of a Little Land by Juhea Kim 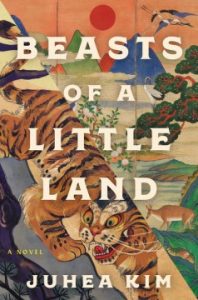 The story begins in 1917 deep in the snowy mountains of occupied Korea. An impoverished local hunter on the brink of starvation saves a young Japanese officer from an attacking tiger. In an instant their fates are connected—and from this encounter unfolds a saga that spans half a century.

A young girl named Jade is sold by her family to Miss Silver’s courtesan school. This is an act of desperation that will cement Jade’s place in the lowest social status. Jade befriends an orphan boy named JungHo who scrapes together a living begging on the streets of Seoul. As they come of age, JungHo is swept up in the revolutionary fight for independence. Jade becomes a sought-after performer with a new romantic prospect of noble birth. Soon she must decide whether she will risk everything for the one who would do the same for her.

“Beasts of a Little Land is a stunning chronicle of the Korean peninsula during the tumultuous decades leading to independence and partition. Told through the lives of a rich cast of characters—courtesans, Japanese generals, and revolutionaries—whose stories intertwine in the most unexpected ways, it is by turns political and sensual, epic and intimate. It is also a profound meditation on place; Kim evokes the urban and natural landscapes of Korea with transporting beauty. This novel will devastate you and then still you with its wise meditations on love and loss. I couldn’t put it down.” — Alexis Schaitkin, author of Saint X 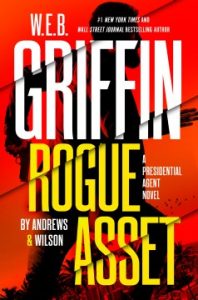 The Secretary of State has been kidnapped from his Cairo hotel after his security detail was wiped out. President Natalie Cohen doesn’t like any of her options. The President asks Charley Castillo to come out of retirement to direct a new Presidential Agent, Captain P. K. “Pick” McCoy, USMC.

Castillo and McCoy track the kidnapped secretary from Cairo to sub-Saharan Africa. How will these two men fight an army of terrorists?

“There’s red-hot action from the get-go in the ninth novel in the late W.E.B. Griffin’s newly revived Presidential Agent series. . . A kick-ass thriller from start to finish.” —Kirkus Reviews

“Fans of bestseller W.E.B. Griffin [will] welcome the return of Griffin’s hero C.G. “Charley” Castillo [in] the capable ninth Presidential Agent novel. . . Andrews and Wilson supply plenty of credible action in the Griffin mold, while the mentoring subplot provides extra interest. Readers will look forward to how the succession angle is handled in the sequel.” —Publishers Weekly