The five new books I’ve selected for October will keep you eagerly turning pages to see what will happen next. Three Sisters is historical fiction based on the real-life Meller sisters who survived Auschwitz to build new lives in Israel. In Last Girl Ghosted a woman works to uncover what happened to the last man she dated and the women who dated him before – they are all missing. Silverview is the last spy novel by John le Carré that his son is releasing posthumously. You’ll find humor mixed with mystery and family drama in The Party Crasher. Explore the mysteries of marriage and the secrets we keep in Oh William! Read on to learn a little more about these outstanding new books and start adding to your holds list. 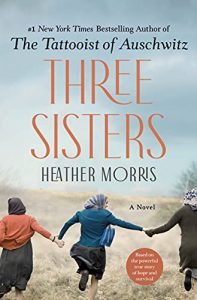 “Morris (The Tattooist of Auschwitz) follows the real-life Meller sisters, who all survived imprisonment at Auschwitz-Birkenau and a winter death march during WWII, in her extraordinary latest. In 1942 Slovakia, Livi Meller, 15, is rounded up with other teens for what is described by the Nazis as “work detail.” Livi’s sister Magda, 17, is protected by her doctor, who admits Magda to the hospital for a slight fever. Cibi, 19, returns from a training camp in the forest for future immigrants to Israel to accompany Livi. But Cibi and Livi are taken to Auschwitz, where they endure more than two years of near starvation, abuse from SS guards, and manual work that includes loading bricks into carts and rummaging through prisoners’ belongings for valuables.

“In 1944, Magda is also sent to Auschwitz, where she is reunited with her sisters; when the war ends, the sisters wander through Germany before returning to find squatters in their home and glaring anti-Semitism. After a harrowing journey to Israel in 1948, the narrative continues with their new life as survivors, as they build families while often struggling with emotional wounds.

“Morris skillfully chronicles the lives of the sisters from childhood to old age, balancing fictional invention with extensive research and immersion into the Mellers’ lives. Readers will be greatly inspired by this story of resilience.” –Publishers Weekly 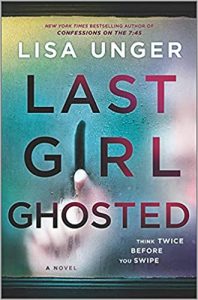 It began with an online dating app. She was intrigued by his picture. They met for a first date she thought might be a one night stand. But she quickly fell for him. She thought they had a powerful connection.

Then he stood her up for a date and disappeared – online profiles deleted, phone disconnected. She was ghosted.

Did she share too much too fast? Is she to blame? She discovers there were other women who thought they loved him. These women later went missing.

She’s looking for answers chasing a digital trail. Is she the predator or the prey in this dangerous hunt?

“Staggering. Unsettling. Vivid and intense. Lisa Unger is our most inventive suspense author, and she’s created another fascinating, timely, and insanely good story with LAST GIRL GHOSTED. Wren Greenwood is one of Unger’s most nuanced characters, and her story, her life, her secrets, explode off the page. Clear your calendar and lock the doors. You will not be able to stop reading.” –J.T. Ellison, New York Times bestselling author of Her Dark Lies 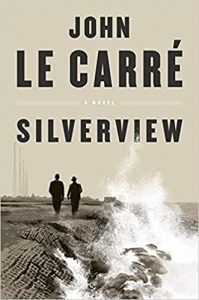 Julian Lawndsley is done with being a spy. He’s trying a simpler life running a bookstore in a small English town. Just a couple months into this new life he’s visited by Edward, a Polish immigrant who knows more about Julian than he should.

At this same time the London spy chief gets a letter warning of a dangerous leak in Julian’s quiet small town.

“First-rate prose and a fascinating plot distinguish the final novel from MWA Grand Master le Carré … This is a fitting coda to a remarkable career.” ―Publishers Weekly

4. The Party Crasher by Sophie Kinsella 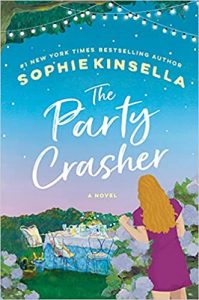 Effie’s beloved parents divorced more than two years ago. This left her wondering if her childhood was as happy as she thought. Effie had a falling out with her dad and is feuding with his very young girlfriend, Krista.

Now her dad and Krista are selling Effie’s childhood home, a Victorian country house named Greenoaks. She declined the belated invite Krista sent her to the last party her family will have at Greenoaks.

Effie decides she must say goodbye to the house so she sneaks in while the party carries on outside. She discovers the house has more secrets than she realized. From inside the house Effie can watch her sister, brother and dad when they think no one’s watching. She overhears conversations and begins to see her family in a new way. Then she sees that Joe, the love of her life who broke her heart, is at the party. Now things will really get messy. 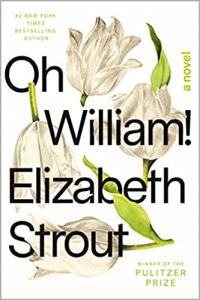 Lucy Barton is a writer, but her ex-husband, William, remains a hard man to read. William has always been a mystery. Another mystery is why the two have remained connected after all these years.

Lucy is both surprised and not surprised when William asks her to join him on a trip to investigate a recently uncovered family secret – one of those secrets that rearrange everything we think we know about the people closest to us. There are fears and insecurities, simple joys and acts of tenderness, and revelations about affairs and other spouses, parents and their children. On every page of this exquisite novel we learn more about the quiet forces that hold us together – even after we’ve grown apart.

“Elizabeth Strout is one of my very favorite writers, so the fact that Oh William! may well be my favorite of her books is a mathematical equation for joy. The depth, complexity, and love contained in these pages is a miraculous achievement.”–Ann Patchett, author of The Dutch House