My November new fiction recommendations are each from a different genre – romance, literature, humor, thriller/suspense and cozy mystery. In The Banned Bookshop of Maggie Banks, Maggie starts an underground book club to sell bestsellers in a town run by a strict literary society. Set in early 1900s Colorado, Gilded Mountain is the unforgettable tale of a young woman who bravely faces the consequences of speaking out against injustice. In the suspense thriller Secluded Cabin Sleeps Six a relaxing weekend trip quickly takes some dark turns.

The smart and witty novel None of This Would Have Happened If Prince Were Alive follows Ramona through the 48 hours after her life was upended by her husband’s affair and an approaching hurricane. Steeped in Secrets is the first in a new cozy mystery series with surprising characters, a bit of magic and possible romance. Read on for more highlights of these new books you’ll want to add to your hold list.

1. The Banned Bookshop of Maggie Banks by Shauna Robinson 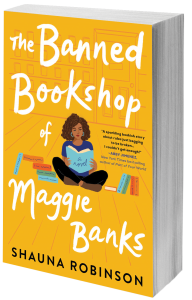 Maggie moves to Bell River to run and help save her best friend’s bookstore. She imagined selling the hottest books to small town folks. However, Bell River’s literary society has a hold on the bookshop. They won’t let Maggie sell anything written in this century.

To keep the store afloat Maggie starts an underground book club to sell bestsellers. Will she be able to keep the club hidden, save the bookstore and keep the town’s leaders happy? Will her love interest help or hinder her mission?

“The Banned Bookshop of Maggie Banks is a charming rom-com about finding your own path and never being scared to break the rules. It’s also an uplifting celebration of the power of books to change people’s lives. Visit your favorite bookstore, curl up in a comfy chair and savor every word!” ― Freya Sampson, author of The Last Chance Library 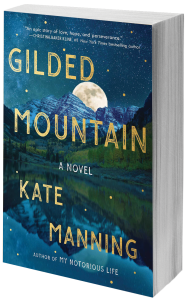 In a voice spiked with sly humor, Sylvie Pelletier recounts leaving her family’s snowbound mountain cabin to work in a manor house. She works for the Padgetts who own the marble-mining company that dominates the town. Sharp-eyed Sylvie is awed by the luxury around her. She’s fascinated by her employer, the charming “Countess” Inge. Sylvie’s confused by the erratic affections of Jasper, the Padgett’s bookish heir. Her fairy-tale ideas take a dark turn when she realizes the Padgetts’ philosophical talk is at odds with their unfair labor practices.

The town of Moonstone is roiling with discontent. A handsome union organizer, along with labor leader Mary Harris “Mother” Jones, is stirring up the quarry workers. The editor of the local newspaper — a bold woman who takes Sylvie on as an apprentice — is publishing unflattering accounts of the Padgett Company. Sylvie navigates vastly different worlds and struggles to find her way amid conflicting loyalties. When the harsh winter brings tragedy, Sylvie must choose between silence and revenge.

“The gold at the center of Kate Manning’s remarkably panoramic and meticulously researched new novel is one indomitable Sylvie Pelletier—an adventurer, a romantic, a crackerjack observer of worlds and hearts. Gilded Mountain is that rare thing: a historical page-turner that nimbly moves from gritty mining shafts to elegant drawing rooms of an earlier America with all its seething and striving, and where—then, as now—fates are decided by a stroke of luck or unluck, kindness and corruption, and reinvention.” —Carol Edgarian, author of Vera 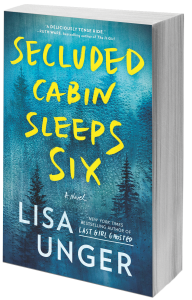 Three couples rent a luxury cabin in the woods for a weekend getaway. Hannah’s brother found the rental that includes a hot tub and a personal chef. However, the relaxing trip quickly takes some dark turns. There’s a deadly storm on the way and a host who keeps showing up unexpectedly. The chef shares a disturbing story about the cabin’s history. The couples also discover some secrets among themselves. Hannah starts to question how well she knows everyone in the group and who she can trust.

“Lisa Unger is a brilliant writer, on the top of her form. Here, she delivers yet another stellar thriller, packed with tension and twists, but also laced with nuanced insight and characterization. On this weekend away, the cabin and its owner are disquieting, the weather is menacing but the threat level is truly amped up by the disturbing family dynamics and a backstory that grips.” –Gilly Macmillan, bestselling author of What She Knew

4. None of This Would Have Happened If Prince Were Alive by Carolyn Prusa 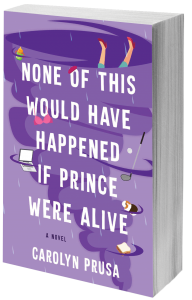 Perfect for fans of Maria Semple and Jennifer Weiner, this smart and witty debut novel follows Ramona through the 48 hours after her life was upended by the discovery of her husband’s affair and an approaching category four hurricane.

Ramona’s got a bratty boss, a toddler, a critical mom and oops — a cheating husband. So a category four hurricane bearing down on her life in Savannah becomes just another item on her to-do list. She’ll add a neighborhood child and the class guinea pig to her entourage as she struggles to evacuate town.

Ignoring her minivan’s check engine light, Ramona navigates police check points, bathroom emergencies, demands from her boss and torrential downpours. She does this all while fielding calls and apology texts from her cheating husband. Ramona longs for the days when her life was like a Prince song, full of sexy creativity and joy.

“Both insightful and messy in the most relatable way, None of This Would Have Happened If Prince Were Alive will have you cackling, nodding in agreement, and rooting hard for Ramona as she battles various storms — literal and figurative.”  —Laura Hankin, author of A Special Place for Women and Happy and You Know It

5. Steeped in Secrets by Lauren Elliott 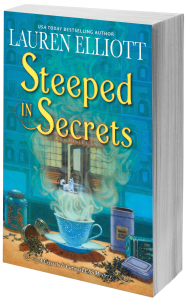 This is the first in a new cozy mystery series. Lauren Elliott is the USA Today bestselling author of the Shay Myers Tea Shop Mysteries and the Beyond the Page Bookstore Mystery Series. She grew up devouring Nancy Drew, graduated to Agatha Christie, and then began writing her own mysteries.

Broke and divorced, intuitive gemologist Shay Myers moves back to her artsy hometown of coastal Bray Harbor. Even with her life in ruins in New Mexico, Shay feels uneasy about resettling and taking over an estate bequeathed to her by Bridget Early, a woman she barely knew.

Shay’s heightened senses — an empathic gift she’s had since childhood — go into overdrive upon touring Crystals & CuriosiTEAS, Bridget’s eclectic tea and psychic shop brimming with Irish lore and Celtic symbols. They reach a boiling point when Shay looks up to discover a stranger’s body sprawled across the shop’s greenhouse roof.

“Elliott delivers appealing characters, surprising twists, a bit of magic, and the promise of romance. Lovers of paranormal cozies are sure to get on board.” —Publishers Weekly