The women in my April new fiction recommendations will draw you into their stories as you explore their pasts and try to figure out their futures. Put these books on your holds list now!

Memphis dives into 70 years of sacrifices and difficult choices the women of one family endure and overcome. An extraordinary woman battles 1960s inequality with wit and intelligence in Lessons in Chemistry. Nobody Gets Out Alive is a collection of dazzling, courageous stories about women struggling to survive in the wilds of male-dominated Alaskan society. You’ll be desperate to discover the fates of six unforgettable characters in the morally complex book The Caregiver. Jump into fast-paced, incredibly fun suspense in the wealthy suburb of Buckhead in One of Us Is Dead. Read on to explore my top picks for April. 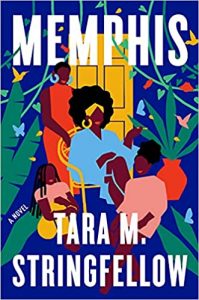 This is one of the most anticipated books of 2022 according to Oprah Daily, Essence, Glamour, Business Insider, Marie Claire, The Millions, She Reads, Book Riot and Bad Form.

Joan is 10 in the summer of 1995 when her mother runs away from her violent father taking Joan and her little sister to Memphis. They seek refuge in the home her grandfather built 50 years earlier. He didn’t get to spend long in the majestic house. Just days after becoming the city’s first Black detective he was lynched.

As Joan grows up she becomes an artist painting portraits of people in her Memphis community. One of her subjects is her neighbor Miss Dawn who talks about curses and stories from her family’s past. Joan learns about the sacrifices and difficult choices the women in her family made during the past 70 years.

“Written with the grace of a poet, Memphis is as hopeful as it is heartbreaking. I fell in love with this family, from Joan’s fierce heart to her grandmother Hazel’s determined resilience. Tara Stringfellow will be an author to watch for years to come. . . . A stellar debut.”—Jacqueline Woodson, bestselling author of Red at the Bone

“Memphis is an evocative, compelling tale that mines the depths of collective Black pain to arrive at something that might be, for once, Black healing. Writing in the ancestral tradition of stories passed from one generation to the next—relived, revised, revealed—Tara M. Stringfellow assembles an endearing and unforgettable cast of characters who find strength in vulnerability, safety in art, and liberation in telling the truth. This is a shining, splendid testimony in the vein of Gloria Naylor, Delores Phillips, Ayana Mathis, and Honorée Jeffers.”—Robert Jones, Jr., New York Times bestselling author of The Prophets

2. Lessons in Chemistry by Bonnie Garmus 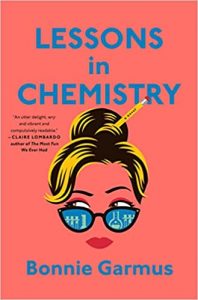 In the early 1960s chemist Elizabeth Zott is part of an otherwise all-male team at Hasting Research Institute. Only one of her colleagues, Calvin Evans, treats her as an equal. In fact he falls in love with her mind.

Like science life is unpredictable. Six years later Elizabeth is a single mother and the reluctant star of a cooking show. Her unusual approach to cooking has a growing following. However, not everyone is happy that in addition to cooking Elizabeth is daring women to change the status quo.

“It’s the world versus Elizabeth Zott, an extraordinary woman determined to live on her own terms, and I had no trouble choosing a side…. A page-turning and highly satisfying tale: zippy, zesty, and Zotty.” –Maggie Shipstead, bestselling author of Great Circle

“Lessons in Chemistry is a breath of fresh air—a witty, propulsive, and refreshingly hopeful novel populated with singular characters. This book is an utter delight—wry, warm, and compulsively readable.”—Claire Lombardo, author of The Most Fun We Ever Had

3. Nobody Gets Out Alive by Leigh Newman 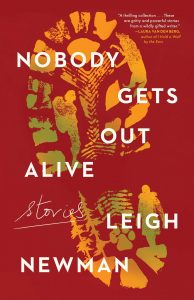 This story collection about women navigating the wilds of male-dominated Alaskan society was named a most anticipated book by Vogue, Literary Hub, The Millions, Good Housekeeping, and Oprah Daily.

Set in Newman’s home state of Alaska, these are dazzling, courageous stories about women struggling to survive not just grizzly bears and charging moose but the raw, exhausting legacy of their marriages and families. In “Howl Palace” an aging widow struggles with a rogue hunting dog and the memories of her five ex-husbands.

In the title story “Nobody Gets Out Alive” newly married Katrina visits her hometown of Anchorage. She blows up her own wedding reception by flirting with the host and running off with an enormous mastodon tusk.

The collection includes stories set in today’s Last Frontier—rife with suburban sprawl, global warming and opioid addiction. Newman also delves into the remote wilderness of the 1970s and ’80s. She brings to life young girls and single moms in search of a wilder, freer, more adventurous America.

“The stories in Nobody Gets Out Alive are big and lush, full of exuberance, sorrow, and swagger. The characters roam highways, rivers, backwoods, and bus routes searching for something immense. Their boundless needs and vast hopes have nowhere to go except Alaska—a place that Newman brings wholly to life for us, alongside delight and devastation.”—Chia-Chia Lin, author of The Unpassing

4. The Caretakers by Amanda Bestor-Siegal 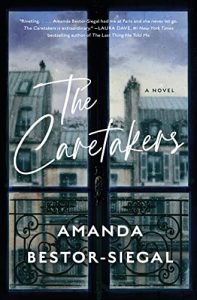 A crowd watches as the Chauvet family’s American au pair is taken away in handcuff’s outside their Paris home. The family’s young child is dead. Some neighbors believe the caregiver is to blame and other’s think the child’s mother is responsible for the death.

The story is told from the points of view of six women. Géraldine is a heartbroken French teacher struggling to support her vulnerable young students. Lou is an incompetent au pair who was recently fired by the family next door. Charlotte is a chilly socialite and reluctant mother. Nathalie is an isolated French teenager desperate for her mother’s attention. Holly is a socially anxious au pair yearning to belong in her adopted country. Alena is the one accused of the crime. She has gone to great lengths to avoid emotional connection. Now she’s caught in her host family’s turbulent power dynamics.

“The Caretakers is thrilling and deeply moving, gorgeously written and intricately plotted, morally complex and surprising and sweeping and intimate, with some of the most indelible and heart-breaking characters I have ever encountered in a novel. It’s a bold and brilliant book.” – Elizabeth McCracken, author of Bowlaway and The Souvenir Museum

“The Caretakers is a deep, enthralling pleasure, as wise as it is lovely. I read it voraciously, desperate to discover the fates of its unforgettable characters—but also with a deep regret that each page was bringing me closer to the end. I could have happily luxuriated in its words and world forever. It defies belief that this is a debut novel: It is magnificent.” – Robin Wasserman, author of Girls on Fire and Mother Daughter Widow Wife

5. One of Us is Dead by Jeneva Rose 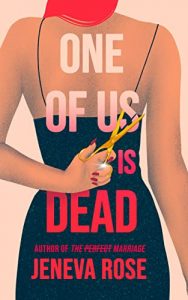 Buckhead is a place with expensive cars, huge homes and competitive friendships.

Shannon was once the queen of Buckhead until her politician husband replaced her with a younger woman. Crystal is the innocent younger woman who has no idea what she’s up against.

Olivia is ready to use every backstabbing, manipulative and underhanded trick to take Shannon’s place. She’s always been envious of the queen.

Jenny owns the most exclusive salon in town and knows everybody’s secrets. Will she ever tell?

Who will survive and who will wind up dead?

“I tore through the pages of this lusciously addictive, fast-paced, incredibly fun suspense…One of Us Is Dead is the perfect binge book. Jeneva Rose is the queen of delectable thrillers!” – Samantha M. Bailey, USA Today and #1 national bestselling author of Woman on the Edge

“Big Little Lies meets Real Housewives in this scandalous mystery by Jeneva Rose. One of Us Is Dead takes an insightful look at wealth and power when a group of socialites gather at an exclusive salon and one of them winds up dead. A wicked, clever, and highly entertaining read!” — Wendy Walker, bestselling author of All Is Not Forgotten