Sneak into March with new thriller and suspense reads that will keep you guessing. Well, four out of my five recommendations fit this category. The League of Gentlewomen Witches is a witty rom-com that will make you laugh out loud. It’s a nice break from the edge of your seat.

Now on to the reads that will keep you up late. The Love of My Life is full of twists and turns as Emma’s husband uncovers her dark secrets. You’ll try to figure out if Beth is a manipulative murderer or if supernatural forces are at play in the spooky thriller The Book of Cold Cases. During Berlin’s brutally cold winter of 1939, a serial killer stalks the city throughout the Third Reich’s forced nightly blackouts in the chilling WWII crime novel Blackout. Explore the deep bonds—and deadly secrets—between two very different sisters haunted by the crimes of their father murdered nearly 20 years earlier in The Secrets We Share. Keep reading to find more about my top picks for March.

1. The Love of My Life by Rosie Walsh 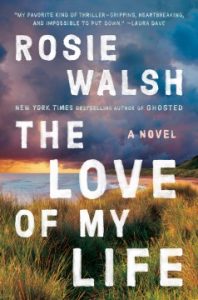 Emma loves her husband Leo and their young daughter Ruby. But everything she’s told them about herself is a lie.

Leo is an obituary writer and Emma is a well-known marine biologist. When she becomes seriously ill, Leo copes by doing what he does best researching people’s lives. As he begins to research Emma’s life, he soon discovers a past he knew nothing about. Even her name isn’t real.

When Leo uncovers some very dark parts of Emma’s past, she must explain herself and prove she is the women he loves. She must also tell him about the other love of her life.

“Rosie Walsh’s The Love of My Life is my favorite kind of thriller–gripping, heartbreaking and impossible to put down.”–Laura Dave, #1 New York Times bestselling author of The Last Thing He Told Me

“The Love of My Life is an extraordinary novel. Rosie Walsh combines the emotional punch of the best of romance with the page-turning twists of the most masterful thrillers. I was torn between pausing to weep, and ploughing on to solve the mysteries.”—Clare Pooley, New York Times bestselling author of The Authenticity Project

2. The Book of Cold Cases by Simone St. James 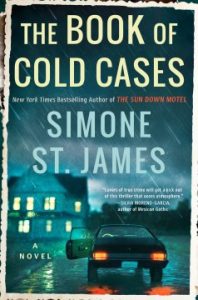 In 1977 Beth Greer, a rich, eccentric 23 year-old, was suspected of killing two men in Claire Lake, Oregon. Both men were killed by the same gun and were found with strange notes. Someone saw Beth fleeing the scene of one of the crimes. However, she was acquitted.

Forty years later, receptionist Shea Collins is running a true crime website the Book of Cold Cases. Shea meets Beth by chance and asks for an interview. Surprisingly, Beth agrees to talk to her.

Shea regularly meets Beth at her isolated mansion, Greer House, which has been her retreat since 1977. While Shea is eager to learn the truth, she is very uncomfortable at the mansion. Something is not right. Is Shea making friends with a manipulative murderer or are there other dangers lurking in the darkness of Greer House?

“No one writes a ghost story like Simone St. James, whose uniquely spooky thrillers are as chilling as they are captivating, and The Book of Cold Cases is St. James at her best. Steeped in atmosphere and spine-tingling chills, this gripping mystery will haunt you from the very beginning.”–Laura McHugh, award-winning author of What’s Done in Darkness

3. The League of Gentlewomen Witches by India Holton 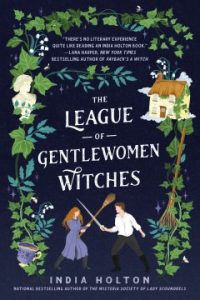 This pick is your fun intermission in the middle of the thriller and suspense new reads.

“A brilliant mix of adventure, romance, and Oscar Wildesque absurdity – one of the wittiest, most original rom coms I have read all year.” –Evie Dunmore, USA Today bestselling author of Bringing Down the Duke

Miss Charlotte Pettifer belongs to a secret league of women skilled in the subtle arts. That is to say—although it must never be said—witchcraft. The League of Gentlewomen Witches strives to improve the world in small ways using magic.

When the long lost amulet of Black Beryl is discovered, it is up to Charlotte, as the future leader of the League, to make sure the powerful talisman does not fall into the wrong hands. Therefore, it is most unfortunate when she crosses paths with Alex O’Riley, a pirate who is no Mr. Darcy. With all the world scrambling after the amulet, Alex and Charlotte join forces to steal it together. If only they could keep their pickpocketing hands to themselves! If Alex’s not careful, he might just steal something else—such as Charlotte’s heart.

“There’s no literary experience quite like reading an India Holton book. The League of Gentlewoman Witches is a wild, rollicking, delicious carnival ride of a story, filled with rakish pirates, chaotic witches, flying houses (and bicycles, and pumpkins), delightful banter, and some serious steam. You’ve never read Victorian romance like this before… and it’ll ruin you for everything else.” –Lana Harper, New York Times bestselling author of Payback’s a Witch 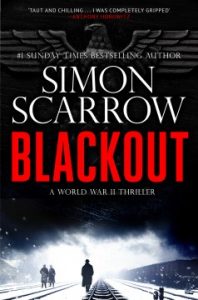 In 1939 Berlin the nightly blackouts are the perfect conditions for unspeakable acts.

When a young woman is found brutally murdered Criminal Inspector Horst Schenke must solve the case quickly. He is already in danger for not joining the Nazi Party. If he doesn’t solve this case, his life might be on the line.

Then a second victim is found. His investigation takes him deeper into the regime where dangers lurks behind every corner.

“Simon Scarrow is a master storyteller. Blackout twists and weaves through wartime Berlin in a riveting take on history. A must-read!” —James D. Shipman, author of Task Force Baum and Irena’s War 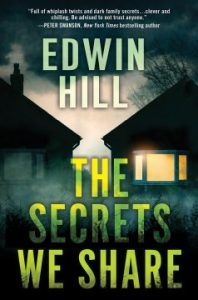 Sisters Natalie Cavanaugh and Glenn Abbot are very different. Natalie is a Boston cop and Glenn is a stylish blogger and author. But they share the same nightmare from their past.

Twenty years ago their father was found dead in the woods behind their house. Neither of them talk about this incident, but someone seems to know something about their secret. Recently Glenn has received anonymous online messages hinting that she’s being watched. There are also unsettling coincidences hitting closer and closer to home.

Natalie wonders how well Glenn knows the people closest to her. Natalie is also having doubts about the people she trusts. She always believed their father was murdered by a neighbor he was having an affair with. But maybe there are many things she doesn’t know about her father, their neighbors, their friends and even herself.

“Full of whiplash twists and dark family secrets, Edwin Hill’s new standalone is clever and chilling. Be advised to not trust anyone.” —Peter Swanson, bestselling author of Every Vow You Break and The Kind Worth Killing