Drama, family secrets, love, spies and ghosts await you in new fiction this month. Woman of Light is a multi-generational western saga about survival, family secrets and love. More Than You’ll Ever Know is an evocative drama about a woman caught leading a double life after one husband murders the other, and the true-crime writer who becomes obsessed with telling her story. In the historical spy thriller December ’41 Old Hollywood collides with a secret Nazi cell. A woman returns to her small Maine hometown, uncovering family secrets that take her on a journey of self-discovery and new love, in the warm and charming novel Flying Solo. In the adult debut from national bestselling author Ashley PostonThe Dead Romantics a disillusioned millennial ghostwriter has to find her way back home in this . Read on for more highlights of my picks of June’s new fiction.

1. Woman of Light by Kali Fajardo-Anstine 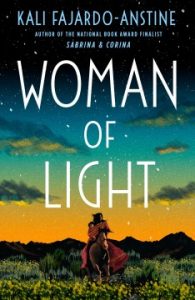 Luz “Little Light” Lopez is a tea leaf reader and laundress who is on her own in 1930s Denver. A violent white mob ran her older brother, Diego, a snake charmer and factory worker, out of town. Luz begins to have visions that transport her to her Indigenous homeland in the nearby Lost Territory. She recollects her ancestors’ origins, how her family flourished, and how they were threatened. She bears witness to the sinister forces that devastated her people and their homelands for generations. It is up to Luz to save her family stories from disappearing.

The wildly entertaining and complex lives of the Lopez family are the focus of this multi-generational western saga. Woman of Light is a novel about survival, family secrets and love.

“An intimate and intensely moving story. Fajardo-Anstine’s lyrical, unpretentious prose renders the generations of women of this story in all of their complexity, offering a nuanced perspective on how the past can inform the future . . . Fajardo-Anstine . . . is a formidable, necessary voice in fiction.”—Taylor Jenkins Reid, author of Malibu Rising

“This is a rare and wondrous kind of novel that assembles the universe from mere words, whose unforgettable characters haunt like long shadows in the southwestern light.” –Gary Shteyngart, bestselling author of Lake Success

2. More Than You’ll Ever Know by Katie Gutierrez 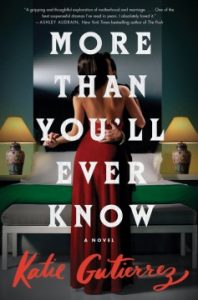 This is an evocative drama about a woman caught leading a double life after one husband murders the other, and the true-crime writer who becomes obsessed with telling her story. You’ll want dive into this literary suspense.

In 1985 Dolores “Lore” Rivera married Andres Russo in Mexico City. Unfortunately for Andres, she was already married to Fabian Rivera in Laredo, Texas. Working as an international banker, Lore was able to split her time between her two husbands and her two countries for a while.

In 2017, struggling true-crime writer Cassie Bowman comes across an article about this murder from the late ’80s. She wants to know more about why a woman would risk everything to lead a double life. Cassie tracks down Lore to uncover the whole story. The more she gets to know Lore, the more she doubts the facts of the murder. Will Cassie uncover the truth and destroy Lore’s quiet life?

“A seductive, urgent tale about desire, family, the pursuit of truth, and the art of storytelling, More Than You’ll Ever Know will astonish readers with its vastness, romance, tragedy, and abundant heart. I didn’t want this book to ever end.” — Jessamine Chan, New York Times bestselling author of The School for Good Mothers 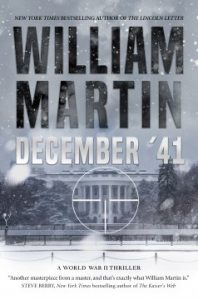 On the day after Pearl Harbor, shocked Americans gather around their radios to hear Franklin Roosevelt declare war. In Los Angeles, a German agent named Martin Browning is planning to kill FDR on the night he lights the National Christmas Tree.

There are several people who might be able to stop Browning including two Hollywood insiders. Kevin Cusack is a Hollywood script reader who also spies on the German Bund of Los Angeles.  Vivian Hopewell is an aspiring actress who signs on to play Martin Browning’s wife and cannot help but fall in love with him.

“This pedal-to-the-floor historical spy thriller is a knockout! In the weeks immediately following Pearl Harbor, Old Hollywood collides with a secret Nazi cell and the result is a tautly written, adrenaline-filled roller coaster ride with the highest of stakes. Add in colorful characters, hairpin turns, and hold-your-breath suspense, and this has Do Not Miss stamped all over it.” –Karen Robards, New York Times bestselling author of The Black Swan of Paris 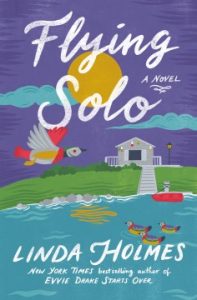 Not long after her wedding is called off, Laurie Sassalyn returns to her hometown to settle the estate of her great-aunt Dot, a spirited adventurer who lived to be 93. While sorting through Dot’s belongings, Laurie finds a mysterious wooden duck at the bottom of a cedar chest. She then finds a love letter to the never-married Dot that ends with the line “And anyway, if you’re ever desperate, there are always ducks, darling.”

Laurie learns the duck has no financial value. But then the duck suspiciously disappears. Why would anyone would steal a wooden duck and why did Dot have it hidden? Now Laurie is negotiating with antiques dealers and con artists, going on after-hours dates at the local library, and reconnecting with her oldest friend and her first love. While working to uncover her great-aunt’s secrets, Laurie works to understand her own past and her future. Can she embrace flying solo?

“Moving and tender . . . A perfect book for anyone who feels a little separate from the flock.” –Rebecca Serle, New York Times bestselling author of In Five Years

5. The Dead Romantics by Ashley Poston 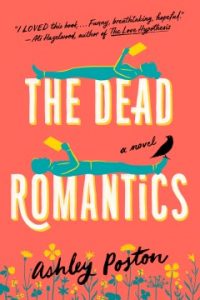 A disillusioned millennial ghostwriter who, quite literally, has some ghosts of her own, has to find her way back home in this sparkling adult debut from national bestselling author Ashley Poston.

Florence Day is the ghostwriter for one of the most prolific romance authors. After a terrible breakup, she no longer believes in love. This is a big problem. Florence is afraid her career might be over.

Then the worst happens – her beloved dad dies. Florence hasn’t been home in more than a decade, but she must return for her dad’s funeral. While she loves her eccentric family, she never felt like she belonged in her hometown. Florence doesn’t plan to stay long.

Incredibly she finds the ghost of her new editor standing at the funeral parlor’s front door, just as infuriatingly handsome as ever. They are both very confused about why he’s there. His unfinished business will have her second-guessing everything she’s ever known about love stories.

“What fun – the Emily Henry/Casey McQuiston reader (AKA me) is going to gobble this book up. Smart, quick, and absolutely bubbling over with love for the genre of romance itself. Delicious.” –Emma Straub, New York Times bestselling author of This Time Tomorrow

“Poston makes her adult debut with a refreshing rom-com about love, loss, and hope…. She manages to both affirm the cynics and give hope to the romantics by simultaneously embracing and subverting rom-com tropes. The sparkling dialogue makes the characters come alive – even the dead ones. Readers won’t be able to put this down.” –Publishers Weekly