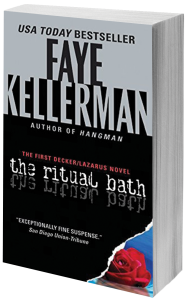 Bestselling author Faye Kellerman published her debut novel, The Ritual Bath, in 1986. It was an instant worldwide sensation and Kellerman has penned dozens of novels since. The Ritual Bath introduced readers to detectives Peter Decker and Rina Lazarus. This month Kellerman will release The Hunt, which is book #27 in their series.

In The Hunt detectives Decker and Lazarus return to Los Angeles when a kidnapping hits close to home. Two desperate cases, two missing people and two teams working against the clock. When all the parts come together, the heart-stopping drama can only lead to an explosive ending where nobody remains unscathed. 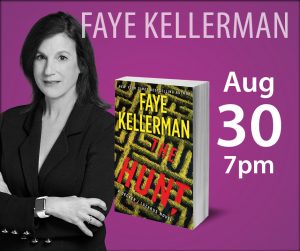 Join us to meet Kellerman via Zoom on Tue, Aug 30, 7pm. Kellerman will talk about her work and journey, then she’ll answer your questions. Kansas Public Radio’s Kaye McIntyre will moderate the conversation from Marvin Auditorium. Attend at the library with McIntyre or attend via Zoom. Register for more information and to save a seat.

Kellerman set out above all to write a series to engage and entertain readers. Over the decades since the first Decker and Lazarus book was published, the crime-solving couple have grown as detectives, people and parents. Readers have been along for the journey. For many readers the personal details are as interesting to follow as the crimes solved.

“The two main characters, Peter and Rina, have met and married and developed throughout the series,” Kellerman said. “They have a blended family because both of them were married before. They now have married children and grandchildren and a foster son whose family is integral to the upcoming novel, The Hunt.”

A window into Kellerman’s faith

Decker and Lazarus are traditional Jews, which is also how Kellerman identifies. Readers love that Kellerman’s stories are a window into her faith.

“Many people find other cultures fascinating,” Kellerman said. “I know I do. I love reading fiction and nonfiction about others, because I learn things and get a peek into other worlds. So, the feedback [from readers] has been great. Not only with my own culture – my Jewish readers love the fact that I got it right – but with many others who are not Jewish but curious. It also represents a balanced look at religion. About a group of people who are not afraid of God. That is sorely lacking in a lot of TV, films, books and general discussion today.”

Read on to learn more about Kellerman’s writing and reading life. Register today to save your spot on Aug 30, and bring your questions for the author.

You are the popular author of dozens of bestselling books, but once upon a time you earned a degree to be a dentist. What inspired you to start writing?

A great imagination and a very supportive husband. I’ve always liked making up stories, but writing a book is an entirely different thing. It took a lot of false starts before I finally found my voice and a vehicle to write the kind of books that catered to what I wanted to say.

For readers who have not yet enjoyed your Decker and Lazarus series, can you give us your personal elevator pitch/nutshell version of the series?

The books are first and foremost crime fiction novels – mysteries – that are meant to engage and entertain. The two main characters, Peter and Rina, have met and married and developed throughout the series. They have a blended family because both of them were married before. They now have married children and grandchildren and a foster son whose family is integral to the upcoming novel, The Hunt. They are also traditional Jews, as I am, and I’ve woven many things about my religion into the series. It makes for a richer novel and more developed characters.

Do you receive reader feedback on the religious aspect of your books? What has been the impact of including so many details of Jewish life and culture?

Many people find other cultures fascinating. I know I do. I love reading fiction and nonfiction about others, because I learn things and get a peek into other worlds. So the feedback has been great. Not only with my own culture – my Jewish readers love the fact that I got it right – but with many others who are not Jewish but curious. It also represents a balanced look at religion. About a group of people who are not afraid of God. That is sorely lacking in a lot of TV, films, books and general discussion today.

What’s the question you are asked most often about writing?

Where do I get my ideas? The answer is everywhere and from everything. I read a lot of nonfiction and I am a keen eavesdropper. I also watch documentaries and a lot of crime shows on TV. But many of my ideas just come into my head.

As a kid growing up, I spent umpteen hours in my local library in Sherman Oaks California and the bigger one in Van Nuys. Not only doing book reports and term papers – there was no internet – but because I took out a lot of my fiction there.  Most recently, like a week ago, we joined Huntington Museum and were treated to some very rare manuscripts from their vault. What an awe-inspiring place! I could have gotten lost in there for centuries and been happy.

I’ve done several talks at our own local library in Beverly Hills. I took my kids there all the time. It was a wonderful place for all of us.

And of course, in college, UCLA med library and the research library were invaluable. I did a lot of my research for Quality of Mercy there. From the UC system they were able to get many manuscripts from the period. It was a thrill.

What do you like to read in your free time? Could you share some of your favorite books, fiction or nonfiction? Can you recommend some other reads for fans of your work?

I read magazines and newspapers as well as a lot of nonfiction and fiction. I love specialty magazines like Birding and Bird Watcher’s Digest as well as Fleishig, which is a kosher cooking magazine. I’ve been reading Biblical Archeological Review for ages as well as American Art Review and lately National Geographic. I rarely recommend unless I know what the reader likes. My motto has always been, read what you like regardless of contents, because it’s the only thing that’ll keep you interested.

The Hunt will be released this month, and it is to be the last of the Decker and Lazarus series. Why did you decide to bring the series to a close? What’s next for you?

The series is on hiatus. It could come back as a couple of single books, but for now I’ve written pretty much what I’ve wanted to write and it’s time to take a long break.

I spend a lot of time reading, learning Hebrew, gardening and traveling. Mostly I do family time with children and grandchildren and of course, Jonathan. We’ve been married for 50 years. We’re both in our 70s. Yet, I feel we’re both in the prime of our lives. Go figure.