On a wintry evening in December 1954 a young army private raped an 11-year-old Austrian school girl and left her for dead by a frozen creek. Although outraged at the terrible crime, many Austrians wanted the soldier turned over to the more lenient Austrian courts. The girl had survived, the soldier was young and the sentence for rape in Austria was 20 years, not the death penalty. Ignoring their pleas, the army court martialed John Bennet and sentenced him to death. 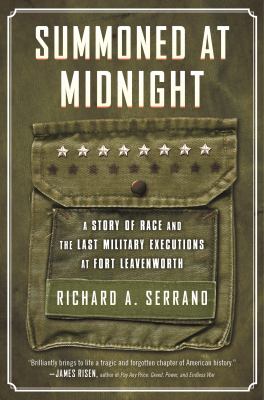 For the next six years “the Castle” at Fort Leavenworth would be Bennett’s home. Still just a teenager, he quavered at thunderstorms, loved pitching balls and kept a pet rat. During the six years Bennett spent on death row, 16 men would be his neighbors. Eight men left by having their sentences commuted. Eight men left by the gallows. All the men with commuted sentences were white. All the hanged men were black. John Bennett was black.

This stark racial injustice is at the core of Richard A. Serrano’s Summoned at Midnight: A Story of Race and the Last Military Executions at Fort Leavenworth. As he reveals Bennett’s fate, he also describes these other death row inmates. The other inmates crimes were equally heinous, yet the white men were saved by good connections, high-priced lawyers and public pressure. The black men had no such advantages.

This is not so much a story of crime, but of flawed military justice. Summoned at Midnight manages to be suspenseful with much of local interest including the history of Fort Leavenworth and a crucial role played by Topeka’s own Dr. Karl Menninger and the Menninger Clinic.