In June 1955 a curious quartet clomped through the backroads of Topeka. Annie Wilkins, a 63 year-old farmer from Maine, road tall in the saddle of her horse Rex, her packhorse Tarzan close beside them, and her little dog Depeche Toi (“Hurry Up”) gamboling merrily at their feet. Residents who followed the national news, or even read the Kansas City papers, would know that Annie was the self-titled “last of the saddle tramps” and she was roughly halfway on her journey to ride from Maine to California. 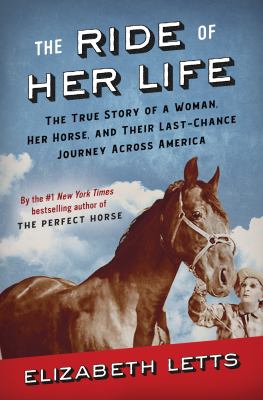 n The Ride of Her Life Elizabeth Letts tells the true and remarkable story of Annie Wilkins. Sick, alone and about to lose her family farm in Minot, Maine to back taxes, Annie decided moving in with friends or relying on county charity wasn’t for her. No, she would fulfill a long-cherished dream and travel to California on horseback. After buying the plucky Tarzan (Rex would come later in Tennessee), Annie packed her saddle bags, tied on a frying pan, improvised a leash for Depeche Toi and left the wintry roads of Maine for sunny California.

Some called Annie foolish, but far more cheered her on. America was changing in the 1950s, cars were more common than horses, superhighways were replacing sleepy country roads, and maybe, just maybe, your neighbor was one of those communists, but people could still relate to self-reliance, to the lure of the open road, to the golden shimmer of California. In almost every town and city, folks opened their homes and their hearts to this small woman with a big dream.