Dickie and Babe. Babe and Dickie. Friends, occasional lovers, sometime enemies and notorious killers. In 1924 the two brilliant teenagers stunned Chicago and the nation with their botched kidnapping and murder of 14 year-old Bobby Franks. How could Nathan Leopold and Richard Loeb, two well-educated young men, the sons of prominent and wealthy Chicago families, commit such a heinous crime? Was it truly just “for the thrill of it?” Greg King and Penny Wilson answer these questions and address the myths and misconceptions in their superior true crime book Nothing but the Night. 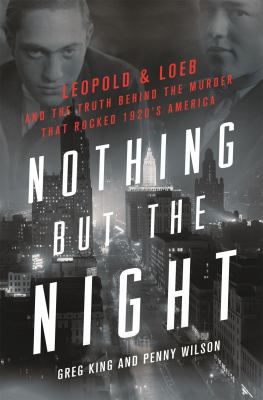 Nearly a century later this so-called “crime of the century” still intrigues us. For me the real appeal of Nothing by the Night is not the recounting of the tragic murder of poor Bobby Franks but the fascinating insights into two disturbed personalities. Richard Loeb was charming and well-liked, but he had a pathological need for acceptance and a twisted desire to commit crimes. Nathan Loepold was a brilliant scholar, but from childhood he had dark fantasies about violence. Alone they were two struggling souls trying to manage their dark desires. Together they were murderers.

The psychopathology at the heart of the crime is just one reason to read Nothing but the Night. If you like old-fashioned detective work or enjoy the spectacle of a good trial (featuring the famous Clarence Darrow), or just want to know exactly which killer did what, this book is for you. If you want to keep going down this dark rabbit hole – I know, fellow true crime fans, it’s hard to stop! – check out Simon Baatz’s For the Thrill of It or the PBS documentary The Perfect Crime.