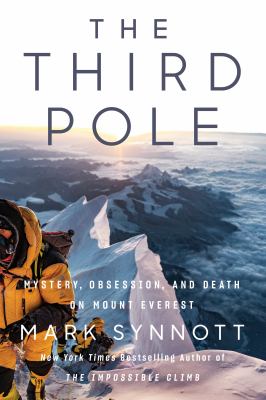 I know, I know, does the world really need another book about climbing Mount Everest? Well, if the book happens to be a riveting climbing memoir, a search for a lost treasure, and an absorbing historical mystery, the answer is yes! The Third Pole by veteran climber Mark Synnott is a high-altitude adventure story you won’t want to miss.

In 1924 British mountaineers George “Because it’s there” Mallory and Alexander “Sandy” Irvine were last seen about 800 feet from the summit of Mount Everest. Equipped with oxygen and, intriguingly a camera, it’s possible they, and not Sir Hillary, were the first to summit Everest. But how to prove it? Mallory’s body was found in 1999 without a camera, but Sandy Irvine’s body was never found.

Synnott became part of a group determined to find Irvine and his camera. Using high tech photographs and eyewitness accounts from other climbers, the group pinpointed the likely location of Irvine’s body. After securing the appropriate funding, permits and a secret weapon – a drone – it was time to climb.

Altitude sickness, bad weather, crowded conditions, trash and dead bodies – ah, the romance of Everest. Yet the answer to one of mountaineering’s greatest mysteries was tantalizingly close if only the weather and their failing bodies would cooperate.