Call it a midlife crisis or a consuming love for family history. When Hollywood filmmaker and producer Hopwood DePree laid eyes on his derelict ancestral home, he just couldn’t quit her. His story of discovering and restoring Hopwood Hall is genially and humorously told in Downton Shabby: One American’s Ultimate DIY Adventure Restoring His Family’s English Castle. 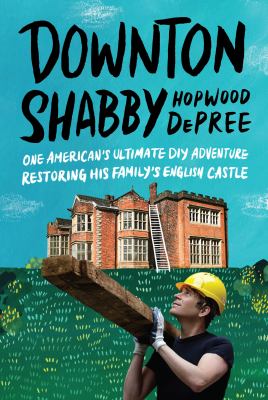 Years ago, Hopwood’s beloved grandfather Pap told him the Hopwoods had a magnificent castle in England. A castle, Hopwood serendipitously discovered during a genealogical internet search, that still stood in Northern England. Sadly “magnificent” was not the right adjective to use anymore. The 600-year-old Hopwood Hall had been invaded by dry rot and damaged by vandals – its beautiful leaded glass windows broken and intricate wood carvings damaged.

Yet, the house was an incredible artifact of British history. There were rooms dating back to the 1400s when goats’ hair was used for mortar and horse urine for shellac. There was a priest hole! And a ghost! How could Hopwood turn his back on his family home? Undaunted by the 10 million pound restoration price tag (well, maybe a little daunted!) Hopwood over the course of just a few years, sold his Hollywood home, moved to England, and became the de facto project manager for restoring Hopwood Hall.

Anglophiles who’ve swooned over Highclere Castle, the “real” Downton Abbey, will delight in this humorous account of man versus the manor. Can one “dim inexperienced Yank” (the true meaning of DIY) restore a centuries-old British castle without losing all his money or his mind?