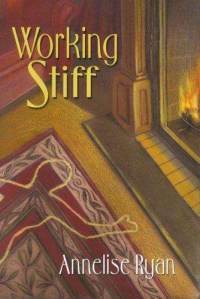 Mattie was not a happy woman after she caught her doctor husband with one of the nurses. So Mattie quit her job as a nurse at the hospital and moved out of the house. Her best friend, Izzy, has come to the rescue with lodging and a job in the medical field. Unfortunately the new house is right next door to Mattie’s old house, and the job is in the medical field that deals with dead bodies as a deputy coroner.

It’s not quite what Mattie had in mind, though she actually has the traits to be a deputy coroner like being a gossip as well as curious and tenacious. With a brash, sarcastic humor and numerous mishaps in tow, Mattie uses her skills of questioning to find the guilty in the Mattie Winston Mystery Series by Annelise Ryan.

Mattie’s first case is a little too close when the nurse Mattie’s husband was seeing is found murdered. Mattie is off the case, and she and her soon to be ex-husband are both suspects, though Mattie does get to meet the handsome detective, Steven Hurley, which might just make it all worth it in Working Stiff. The second book in the series is Scared Stiff, and the latest book is Frozen Stiff.