With the roar of engines and the drop of a tricolor flag, the 1938 Pau Grand Prix was underway. Although the hundred-lap race fielded 8 cars, race fans knew it was really a duel: the sleek German Silver Arrow, a model that dominated previous years of Grand Prix racing, and the underdog, the French Delahaye 145 with a Jewish driver at the wheel. It was France vs. Germany and the fierce pride of each nation was at stake. 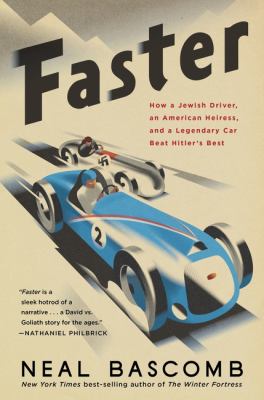 That the Delahaye 145 was in the race at all was due to a 5’4” bobbed hair dynamo named Lucy Schell. An American heiress and skilled rally driver, Lucy threw all her considerable resources and enthusiasm into creating her own independent racing team, Ecurie Bleu. Lucy believed her team would not only restore France’s storied motorsport reputation but would also prove to Herr Hitler that Nazi know-how wasn’t always victorious.

Faster by Neal Bascomb is a lively account of a once-famous race, car and driver forgotten by history. Classic car enthusiasts and motorsport fans will enjoy the detailed descriptions of the race cars and courses that were part of the golden days of Grand Prix racing.