Four of these new December releases will give you a warm, fuzzy feeling as the protagonist falls in love or rediscovers the deep love of family. With plenty of hilarious and silly moments, these reads are champions in the rom-com genre. The remaining new release I’m recommending, Africaville, is a much more serious read. Africaville is such a moving and powerful story that I had to include it in this month’s Fiction 5.

1. Beating About the Bush by M.C. Beaton 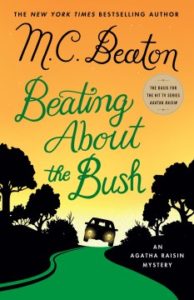 This is M.C. Beaton’s 30th book in the Agatha Raisin mystery series. Agatha is an obnoxious, silly and out-spoken character who loves romance and solving mysteries.

In this book, PI Agatha is hired to investigate a case of industrial espionage at a battery factory. Someone burned down the research and development department, destroying a prototype for a new product. During the investigation, Agatha discovers the body of an assistant, Mrs. Dinwiddy. This mystery gets even weirder when the prime suspect in the murder is the company’s pet donkey Wizz-Wazz.

In Agatha’s personal life she’s grappling with feelings for her long-time friend and occasional lover, Sir Charles Fraith. This story takes many comical twists and turns that will keep you on the edge of your seat wondering what could possibly happen next.

“Winning….Cozy fans with a taste for the silly and the offbeat will be gratified. This long-running series shows no signs of losing steam.” ―Publishers Weekly 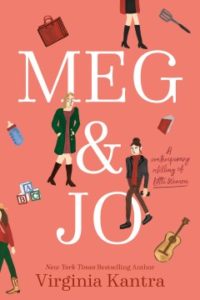 This is a modern retelling of Little Women by Louisa May Alcott. Meg & Jo follows the March sisters – reliable Meg, independent Jo, stylish Amy and shy Beth – as they pursue their separate dreams.

After the unthinkable happened and Jo lost her journalism job, she’s a prep chef in New York City writing a secret food blog. Meg always seems to have everything together at all times, but she’s really an over-worked and overwhelmed stay-at-home mom. Beth is a shy aspiring musician and Amy is in Paris working as an intern at Louis Vuitton.

When their mother falls ill unexpectedly, Meg and Jo rally and return home to North Carolina to take care of her. Spending time together at home reminds them of what is most important in life – family.

“I don’t know of another author who could do justice to Little Women. In a warm, realistic, and humorous voice, Virginia Kantra knocks it out of the park with Meg & Jo in this rich retelling of the beloved classic.”—Kristan Higgins, New York Times bestselling author of Life and Other Inconveniences 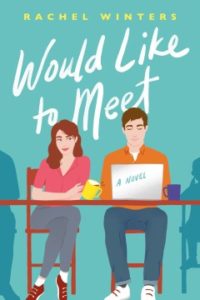 Evie Summers is an assistant at a TV and film talent agency. She’s ready to move up the ladder. To do that she must convince screenwriter Ezra Chester to fulfill his contract to write a rom-com for the movie studio. There’s only one problem, Ezra hates romantic cliches.

The only way to get Ezra to write the script is to prove to him that real relationships can be just like the ones in movies. Evie has almost lost hope in love herself, but she will do anything to save her career. Ezra gives Evie three months to meet a man via meet-cute. Evie sets out to stage different meet-cutes based on popular romantic movie scenes.

Evie has help along the way from well-meaning friends, Ben and Annette, a father and daughter who keep witnessing her awkward attempts at finding love. The question is, can someone who has given up on romance find her very own meet-cute with the man of her dreams?

“Evie is a scrappy, winning heroine…. The references to classic films of the genre will delight rom-com fans, as will the sweet romance. The best scenes, though, are with Evie and her three best friends, who have the warmly mocking dynamic of friends in a Richard Curtis film. A lovely, humorous ode to romantic comedies.”—Kirkus Reviews 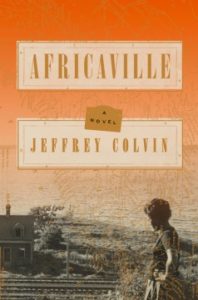 “Inspired by Africaville, a neighborhood in Halifax, Nova Scotia, Colvin’s intriguing and memorable debut shines a light on a little-known black experience: the freed slaves from the Caribbean and U.S. who established a community in Canada in the 1800s. This family saga extends from 1918 to 1992 and focuses on descendants of the Sebolt and Platt families, who are joined when Omar Platt has an affair with Kath Ella Sebolt in 1936 right before his accidental death. She gives birth to a son and leaves Halifax for Montreal to further her education, meeting her future husband there, a white man who adopts baby Omar, renaming him Etienne. Etienne moves to Alabama in the 1960s, passes for white, marries a white woman, and ignores the black side of his family to such an extent that his own son, Warner, doesn’t find out about his black heritage until after his father’s death. Colvin expertly weaves in the subject of owning one’s heritage as Warner comes to terms with his Canadian past and the tragedies that dogged the Sebolts and Platts. The book covers much territory – the black experience in a small enclave in Canada and Etienne’s and Warner’s grappling with their racial identity – and sometimes these varying plots feel like they belong in two different books, making for a novel that feels diffuse. Nevertheless, this is a penetrating, fresh look at the indomitable spirit of black pioneers and their descendants.” -Publisher’s Weekly

“Africaville turns history into an engaging family story, one that begins in Nova Scotia and then travels across North America. It’s a gripping and moving book. Jeffrey Colvin writes with such affection and authority. I thought of the fine work of Esi Edugyan and Edward P. Jones and E.L. Doctorow, too. He deserves to be counted in their number and this is an excellent debut.” -Victor LaValle, author of The Changeling 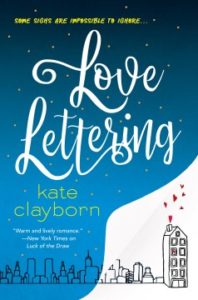 Meg Mackworth is a calligraphy artist living in New York City. Her intricate hand lettering has made her work highly sought after. Meg’s other skill is reading people and seeing signs that other people often miss.

When she’s hired to design the wedding programs for Reid Sutherland and his polished fiancé, she knew the relationship was doomed from the start. Meg hid the word mistake in the wedding programs as a secret hint to the wedding party.
One year later, Meg is experiencing a creative block when Reid tracks her down to ask about the message and how she knew the wedding was a mistake. Together they discover figurative and literal signs that inspire them and bring them closer together. They can’t ignore their deepening connection.

“This book will wake you up in the middle of the night aching for these perfectly imperfect characters.” —Sonali Dev, author of Pride, Prejudice, and Other Flavors