Add these captivating new books to your to-be-read list. I’m recommending December new releases that are quite varied, so there’s something for everyone. You’ll find family competition, romantic destiny, animals taking the lead, a conflicted undercover agent and a tale based on a real-life unsolved mystery. Happy reading!

1. The Chicken Sisters by KJ Dell’Antonia 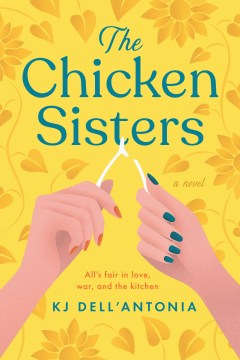 If you’re a long-time Kansan, the premise of this story will sound very familiar. While this novel is set in a fictional Kansas town, I can’t help but think of two chicken restaurants in Pittsburg, Kansas.

In this book two families own competing chicken restaurants in a small Kansas town. To try to end the century long feud over who has the better chicken one family member, Amanda, contacts a national food competition reality TV show. Food Wars offers $100,000 to the winner.

This impending competition brings Amanda’s sister Mae home to help the opposing restaurant. While both families work to put themselves in the best light for reality TV, family secrets begin to be revealed. Will the families fight with each other or fight together to save their joint heritage?

“Nobody knows the humor and pathos of complicated family relationships better than K.J. Dell’Antonia, which is why this story about sisters and fried chicken and reality TV is such a satisfying read. It’s like the comfort-food of novels: warm, memorable, and wholly original. I loved it.”—Laura Zigman, author of Separation Anxiety

2. Perestroika in Paris by Jane Smiley 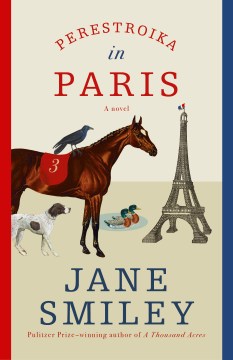 Paras, short for Perestroika, is a spirited racehorse at a racetrack west of Paris. One day she finds the door of her stall open and she wanders all the way to the City of Light. Paras is dazzled and often mystified by the sights, sounds and smells around her, but she isn’t afraid.

Soon she meets an elegant dog, a German shorthaired pointer named Frida, who knows how to get by without attracting the attention of suspicious Parisians. Paras and Frida coexist for a time in the city’s lush green spaces, nourished by Frida’s strategic trips to the vegetable market. They keep company with two irrepressible ducks and an opinionated raven. But then Paras meets a human boy, Etienne, and discovers a new, otherworldly part of Paris: the ivy-walled house where the boy and his nearly-one-hundred-year-old great-grandmother live in seclusion.

As the cold weather and Christmas near, the unlikeliest of friendships bloom. But how long can a runaway horse stay undiscovered in Paris? How long can a boy keep her hidden and all to himself? Jane Smiley’s beguiling new novel is itself an adventure that celebrates curiosity, ingenuity, and the desire of all creatures for true love and freedom.

“Perestroika in Paris couldn’t have come at a better time . . . Smiley’s wit and her lyrical prose make the book a sparkling screwball-comedy treat . . . Fanciful, smart, and atmospheric . . . It’s hard to imagine anyone not enjoying this wistful charmer of a book.”—Michael Upchurch, Seattle Times

3. This Time Next Year by Sophie Cousens 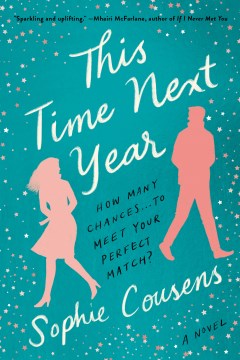 “Destiny has a hand in Cousens’s touching debut. Minnie Cooper and Quinn Hamilton were born in the same hospital on January 1, 1990. Quinn, whose family bagged the cash prize for having the first baby born in the 90s, has always loved his birthday. Minnie’s New Year’s celebrations have always gone horribly and she believes the holiday is jinxed.

“New Year’s Eve 2019 is no different: she’s dragged to her boyfriend’s work friend’s party, someone vomits on her shirt, and she manages to lock herself in the washroom while trying to clean it up. She isn’t rescued until the next morning–by Quinn. The days after go from bad to worse for Minnie as her catering business approaches the brink of ruin and her landlord evicts her from her apartment.

Surprisingly, Quinn swoops in to save the day again, proving himself unworthy of the hatred Minnie’s carried for him all these years for claiming the money her family desperately needed. Flashbacks to New Year’s past and subplots about both Quinn and Minnie’s families add depth, while hilarious secondary characters inject levity in just the right places. The romance is slow to sizzle, but Cousens’s debut is ripe with both emotional vulnerability and zaniness.” –Publishers Weekly

4. A Spy in the Struggle by Aya de León 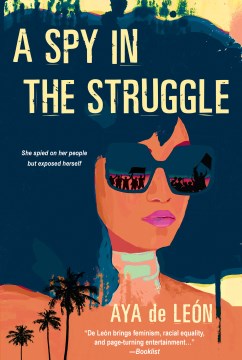 Yolanda Vance worked her way out of poverty through prep school and Harvard Law. After she turns in her corrupt bosses as a prestigious law firm, she goes to work for the FBI. Yolanda’s sent undercover to investigate an African-American “extremist” activist group. They claim a biotech corporation is exploiting the neighborhood. Yolanda wants this assignment done so she can go back to a comfortable life in corporate law.

During the assignment an unexpected romance opens her heart and a suspicious death opens her eyes. Dark money forces will do anything to bury Yolanda and the movement. Fueled by memories of who she once was—and what once really mattered most—how can she tell those who’ve come to trust her that she’s been spying? As the stakes escalate, Yolanda will have to choose between betraying the cause or invoking the wrath of the FBI.

“Gripping feminist heist fiction about turning the tables on the disaster capitalists in the jaws of climate apocalypse.” —Naomi Klein, author of The Shock Doctrine

5. The Mystery of Mrs. Christie by Marie Benedict 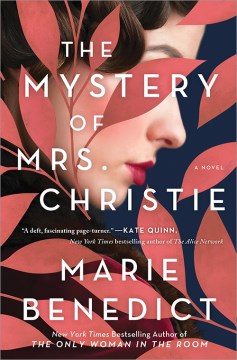 December 1926: England unleashes the largest manhunt in its history. The object of the search is not an escaped convict or a war criminal, but the missing wife of a WWI hero, up-and-coming mystery author Agatha Christie. When her car is found wrecked, empty, and abandoned near a natural spring, the country is in a frenzy. Eleven days later, Agatha reappears, claiming amnesia. She provides no answers for her disappearance. That is…until she writes a very strange book about a missing woman, a murderous husband, and a plan to expose the truth. What role did her unfaithful husband play? What was he not telling investigators? The Mystery of Mrs. Christie explores one strong woman’s successful endeavor to take her history into her own hands.

“With twists, surprises, and an ending that packs a punch in more ways than one, The Mystery of Mrs. Christie is a whodunit infinitely worthy of its famous heroine. Benedict’s exploration of Agatha Christie’s life and mysterious disappearance will have book club discussions running overtime. Quite simply, I loved it!” – Lisa Wingate, #1 New York Times bestselling author of Before We Were Yours and The Book of Lost Friends.