Let’s take a look at those most resilient of creatures – Zombies. Watch all of these now, they are so much fun.

The Return of the Living Dead 1985 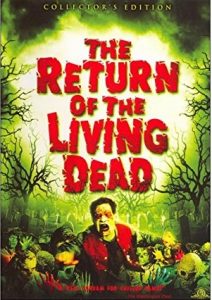 Today is Freddy’s first day at the medical supply warehouse. During the company tour, which fresh cadavers, he asks what’s the weirdest thing his boss Frank has seen.

Frank asks if he remembers the movie about the dead coming to life and eating people? It was about real events. Darrow Chemical Co. spilled 245 Trioxin in a hospital morgue. The army covered it up. Frank knows because the bodies were sent to the medical supply warehouse by accident. Sealing everybody’s fate Frank asks, “Do you want to see them?”

Turns out the government issued canisters in the basement aren’t as solid as you might hope. One explosively opens when Frank is showing off the bodies and starts spewing a thick cloud of gas. The guys drop to the floor and the gas heads into the ventilation system.

Frank and Freddy wake up looking bad and feeling worse. All the dead stuff in the warehouse is also awake and attacking. The guys use the movie as their template and try to destroy the zombie. Nothing, neither head-shots nor dismemberment works to stop it. Unfortunately for everyone but us viewers, these are un-killable zombies. Is that an oxymoron?

The guys head across the street to the conveniently located cemetery morgue combo and ask Ernie the embalmer to incinerate the pieces. Cremating the still moving dismembered body parts does work. However, it also spews chemicals into the air and a heavy rainstorm sends it all right back down to earth. As the toxic mix seeps into the cemetery full of bodies AC/DC asks us do we want to party? Why yes. Yes, we do.

Zombies begin gradually spilling out of the cemetery and engage in general zombie hi jinks. They also insidiously creep outward staying hidden until there is something to attack. Nowhere is safe.

Not your average zombies

Many things set these zombies apart. They talk. These are the first screen zombies to run. The zombies are also sneaky, clever trolls. One zombie helpfully explains why zombies eat people. At the medical supply warehouse, we see one of the most popular zombies in movie history, Tarman, a gooey, rubbery boned canister zombie.

This movie stays true to zombie traditions while being both funny and clever. The premise is almost too realistic. It is scary and has eye-rolling laughs. The movie has a ton of hidden references and is the origin of zombies eating brains. The Return of the Living Dead even has a great soundtrack. 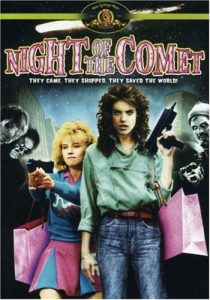 Tonight a comet that hasn’t been seen since the time of the dinosaur extinction is returning. Regina (Reg) is a teen working at the movie theater. She spends most of her time playing video games in the lobby or dodging milk duds and dots. Luckily she ends up spending the night in the projection booth and misses the comet.

The next morning everything has a reddish cast and the streets of LA are suspiciously empty except for the red dust and clothing all over. Reg accidentally locks herself out of the movie theater and gets attacked by a comet zombie in the alley. She knows how to defend herself. Regina fights off the zombie and rides away on her boyfriend’s motorcycle.

She is startled and happy to find her sister Sam, a total valley girl, alive and well. Sam spent the night in the garden shed after a fight with their stepmother. Reg convinces Sam everyone is gone, they all turned to red dust. The sisters then hear a DJ doing the morning weather and go investigate.

They get to the radio station and find everything is automated. Another survivor, Hector, shows up and they set up a basecamp at the station. Sam gets on the radio and tells people to call in. The phone immediately rings. It’s a group of scientists who explain that people who were partially exposed to the comet are turning into zombies. The scientists meet  up with Reg, Sam and Hector.

With a plan in place everyone scatters. Hector drives home to check on his parents. The girls who were raised by their army ranger father go practice their shooting. They complain that “Daddy would have got us Uzis” when one of their guns jams. After target practice the sisters decide to go shopping, cause why not?

While they are dancing, bonding and having a fashion show to another great soundtrack, some evil looking stock boys watch on the store’s security monitors. They end up in a big shoot out/shoe throwing fight. The sisters are narrowly saved from zombie torture when the scientists show up at the mall.

They separate, which we know is a big mistake. Sam and a few scientist stay behind to wait for Hector. Reg goes to the scientist’s underground bunker. Right away the bunker scientist are acting creepy and odd. They ask Reg lots of medical history questions. She gets suspicious and very uncooperative. Reg starts asking her own questions while the scientists are getting meaner by the minute.

At the radio station Hector arrives to find one of female scientist waiting. She explains the scientists were partially exposed and are doing fatal experimentation on survivors to try to cure themselves. Hector heads to the compound to save Reg.

Reg meanwhile has been busy saving herself. She picks up other survivors along the way and overhears the nurses and their nefarious plotting. She and fashionably-dressed Sam are reunited. After complimenting each other’s outfits they get down to the business of fighting the evil scientists and reestablishing civilization.

The sisters in this sweet, irreverent 80’s B movie notice that the apocalypse is sad, but they never let it get them down. They take full advantage of apocalypse perks. They stay sassy and competently defend themselves while doing things like running the radio station and lowering the drinking age to 10, “you will need ID, let’s be real.”

The Scouts Guide to the Zombie Apocalypse 2015 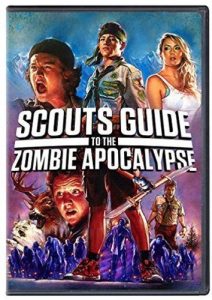 Once again scientists are the evil masterminds behind the zombie problem. We never find out exactly what they are doing experimenting with living corpses. The goofy janitor who is told not to touch anything couldn’t have known giving a guy CPR would start an apocalypse.

Our three scouts are high school teens who are simultaneously trying to break away from scouting and always demonstrating that scouting skills are useful if not downright badass. The night everything hits the fan is the same night one of their small group, Augie, is getting a special award at a camp-out. It is also the night of a big party with all the cool kids at a secret location.

Does something seem off?

The scouts hike out to their campsite amidst some subtle zombie clues, which they miss. Their scout leader never shows because he encountered a zombie deer on his way in. In spite of his absence, they have a fantastic montage evening. The night ends in a blowout when Ben and Carter try to sneak off to find the cool kids party.

They notice town is pretty empty. The guys stop at a liquor store where earlier Denise, a cocktail waitress, bought them beer. They are overjoyed to see the strip club across the street has no bouncer on duty. The guys go in and think nothing is unusual until the zombie stripper starts to spew and attack. They are saved by Denise. The group escapes the club and outside zombies are everywhere.

Zombies chase the gang into a police station where they learn there was an evacuation. They take some selfies from the safety of the jail cell they locked themselves into. Augie shows up after an encounter with the zombie scout leader and helps them out. They all head out of town to a military perimeter where they learn the town is going to be bombed. Oh, and BTW, the secret party is so secret the cool kids haven’t been found, warned or evacuated out of the bombing zone.

The scouts decide to save their schoolmates because Carter’s sister, Ben’s secret crush, is at the party. They sneak back around the zombies and go to Carter’s house to read her diary and find the party location. We have a moment of sweetness and bonding when Denise offers Ben dating advice.

The group fights off the creepiest zombie cats ever from next door. Denise goes for help. We are treated to a musical montage featuring the scouts hardware store gear up. They get to the party just on the heels of the zombie horde. During the melee the guys show everyone what being a scout is all about.

This movie is funny, violent, gross and quick moving. Just the right amount of each are mixed in to make it an enjoyable zombie romp.

What is your favorite zombie movie?

Take a look at these and other fun zombie movies you might have missed. Don’t forget to check out Hoopla where streaming titles are always available free with your library card!