There’s just something scary about sharks. They maim, they kill, they swim. Let’s begin with what is arguably the campiest shark movie around. 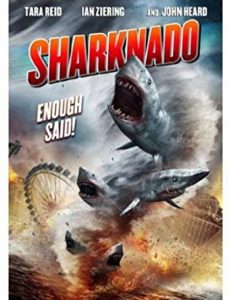 This was a made for TV movie that single-handedly reinvigorated the campy shark horror movie genre. It hit that perfect spot of a ridiculous premise, taking itself just seriously enough, tongue-in-cheek humor, and character and situational tropes galore.

Sharknado is a fun watch. Our hero is ex surfer/bar owner Fin (Ian Ziering). The sharks start showing up during his morning surfing. From his surfboard Fin bravely saves his friend Baz on a jet ski. Sharks are attacking many people in the shallow water ruining limbs and tattoos. Luckily, there is a bikini clad waitress who offers her apron as a tourniquet. These hardy folk are not thrown off their stride for long. Soon Fin is back at his bar on the pier where customers and staff watch the hurricane approach the shore.

This hurricane is different. It is picking up the many sharks in the water and tossing them mouth first everywhere. Incidentally, why isn’t this movie called Sharkicane? Fantastic destruction of the pier ensues. Fin narrowly escapes with his lovelorn barmaid Nova, favorite drunken customer George, and jet ski buddy Baz. Fin heads to save his prickly ex-wife April (Tara Reid) and their daughter.

Sharks on the streets

The group travels through the flooded streets of Los Angeles while sharks swim through the bloody water banging on the sides of their SUV. They rescue April and her daughter as her house washes away taking her new husband and the shark that ate him down with it. Next they head to rescue Fin’s son who is in helicopter flight school. They save a busload of school kids and others along the way. Make sure you look down the streets during the bus scene.

Once the whole family is back together, they concoct a plan to stop the Sharknados by dropping bombs into them out of the helicopter. Neither the sharks nor April’s heart can be conquered easily. Fin leads the group into the epic battle with his chainsaw and trusty friends. Quick, gory, and full of fun CGI you should definitely watch this. 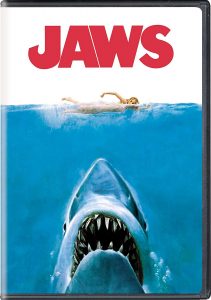 I couldn’t talk about sharks without including the grandfather of all shark movies. It was the movie our friends used to scare us out of the water, even in Kansas.

This movie is so ’70s it hurts. The special effects are all practical in this one and the slow moving shark looks pretty good on my TV. This movie holds up well and is a lot scarier than most.

In the intro we witness a college girl die in a gruesome nighttime shark attack and immediately shift to the next morning in the excruciatingly quaint beach-side town. We meet Chief Brody (Roy Scheider) who is new in town. He gets an early morning phone call and leaves his charming family and heads for the scene of the mangled girl.

The whole town is aghast as the chief says the probable cause of death is shark attack and orders the beaches closed. The mayor immediately reminds Brody that Amity is a beach town and it is the 4th of July weekend. There’s a special anniversary regatta and the town needs those summer dollars to survive.

Brody caves and keeps the beaches open. When everyone is having a lovely day at the beach, a shark eats a young boy right off the shore. This is surprising for the time as even now you don’t see many kids get killed in horror movies. The boy’s mother is understandably upset that the chief knew and still allowed people to swim. She publicly shames him, smacks him, and offers a $3000 bounty for anyone who can kill the shark.

The bounty brings in droves of amateurs eager to kill the maneater. It is glorious onscreen chaos at the harbor, in the water and around the town. There are some great moments with oceanographer expert, Hooper (a very young Richard Dreyfuss). He performs his own autopsy on the victim (do they let oceanographers do that?) and dramatically delivers his immortal line, “This is not a boat accident. It wasn’t any propeller. It wasn’t any coral reef, and it wasn’t Jack the ripper. It was a shark.”

More people get plucked from the shoreline and the chief finally hires local curmudgeon/fisherman Quint to help. Quint is a wild card to say the least, but he knows his stuff. He and Hopper constantly bicker about who knows more about sharks and the ocean. In spite of this competition there is a lot of bromance in this movie. The friendship between Hopper and Chief Brody is especially good and rarely done better.

We have 3 guys on a small boat chasing a giant shark out to sea. As they get further out to sea it becomes clear the shark is hunting the guys as much as they are hunting the shark. The shark proves it’s stronger, craftier and more bloodthirsty than even Quint.

Movie buffs credit this fun scary movie as the first summer blockbuster. The camp is mostly provided by the over-the-top salty sea captain Quint and the interactions between the chief and the townsfolk. You also get an early peek at the snarky comedy gold that Richard Dreyfuss brings to everything.

Take a look at these other gems. Don’t forget to checkout Hoopla where streaming titles are always available free with your library card!