This month I’m featuring sea monsters for those of us who always knew that under the surface of that pretty body of water something was lurking, something that wants to get us. 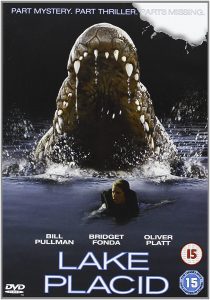 Lake Placid takes itself just seriously enough to be great and is one of my all-time favorite movies. If there was an award for clever use of snark, insults and cursing, this movie would have won hands down. The cast has great chemistry and the dialog is a snappy delight. It is the first time I heard the venerable Betty White curse. Brendan Gleeson plays the Twinkie eating small town sheriff. Bill Pullman is the handsome fish and game officer. Bridget Fonda is the fish out of water paleontologist and Oliver Plath is the eccentric expert. Keep your eyes open for some quick cameos in this hilarious lake monster romp.

In the remote Black Lake in Maine something is attacking and eating folks. New York paleontologist Kelly arrives to check it out. She joins the sheriff and the fish and game officer on their trek into the wilderness, in spite of her issues with everything from timber to tents. When they get to camp, oddball Hector joins them in his helicopter with a lot of expensive equipment and expertise about crocodiles.

Amidst a lot of sniping, they row out onto the lake to investigate. This lake is sooo pretty. They talk to the reclusive Betty White, the only person who lives on the lake. She claims no knowledge of the crocodile while also giving a questionable explanation for her husband’s death. They leave and lose a deputy during a close encounter with the large crocodile.

Fonda manages to be both a cliche New Yorker and endearingly vulnerable. When the guys try to calm her after stumbles across a dismembered head on their shoreline hike, she yells, “I am calm. I am composed. It’s the second time I’ve been hit with a severed head, and it upsets me!” You go girl!

In the next moment they glance across the woods and are surprised to see Betty’s walking one of her cows out to the gigantic crocodile waiting in the water. They decide to try and capture this “miracle of ecological significance” since crocodiles shouldn’t be in Maine. They plan to dangle one of Betty’s cows in the water from Hector’s helicopter.  Their oddly logical scheme doesn’t go precisely as planned.

Be sure to watch the credits for an epic surprise and some cheeky fun. 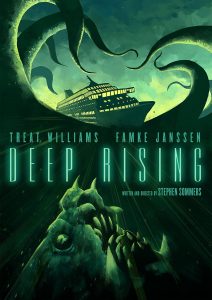 The Argonautica is the greatest, most luxurious, most expensive cruise ship ever built. Tonight it is on its maiden voyage filled to the brim with passengers. As they gamble and drink their way through a storm, elegantly dressed Trillian (Famke Janssen) pickpockets her way to the vault. She’s promptly caught and locked in a food storage area.

On the bridge we oversee someone remove and break three shiny 1998 CD-ROMs and the whole ship begins to fail. Apparently everything was run by these 3 discs! Just then they pick up something large on sonar that’s heading their way. The crash is spectacular! We are treated to 5 minutes of people falling off four-story mezzanines and people running and screaming down long ship hallways. One woman locks herself in a bathroom and is sucked down the commode by something.

Meanwhile a tough little boat and her crew are making their way through the driving storm to deliver a bunch of mean nasty mercenaries to a remote location with unknown cargo. John, the captain (Treat Williams) doesn’t ask questions as long as they pay. The mercs end up ordering the crew around at gun point. They hit a lifeboat at high speed and end up stopped just in view of the cruise ship. They board the cruise ship and the real fun begins.

The mercs are ready to rob everyone and are disappointed when they slowly realize no one is on board. Trillian  escapes and heads for the vault where the mercs force her to open it. They find a gruesome yet funny surprise. One of my favorite scenes. They also find the ship captain, the owner and some important people locked in the vault.

The magnificently designed creature plays peekaboo with the audience as it picks off people we largely don’t like one by one. Great special effects for 1998. Trillian and John bond over survival, common sense and good looks. The duo try to make their way back to John’s smaller boat to escape. Eventually they must confront the enormous creature and the evil conspirator. Even with a jet ski and torpedoes, things don’t end tidily leaving an opening for a sequel.

This movie is everything you hope for in a late 90s sea monster flick. There’s technology running the cruise ship, evil mercenaries and an inside conspirator disabling the technology. You also get a plucky ask-no-questions crew, blond Famke Janssen up to no good, a big storm, and an absolutely fantastic sea creature large enough to eat the entire cruise ship full of overly wealthy passengers in a really grisly way.

Creature from the Black Lagoon (1954) 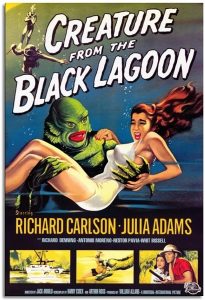 Dr. Carl, an archaeologist with questionable practices, hacks a webbed hand out of a cliff side in the jungle. He then races away to form an expedition, leaving his assistants to the fate of all assistants left behind in the jungle. Dr. Carl recruits a small batch of younger colleagues, all of whom are attractive and moody doctors, and Kay the token pretty girl/assistant. It’s never clear what she does, but Kay’s important enough to bring on this dangerous jungle expedition. She does conveniently give them someone to explain stuff to.

They set off down the jungle river and the boat captain tells tales of the man-like creature in the paradise lagoon no one returns from, so they head there. Everyone is on guard when they encounter Dr. Carl’s dead assistants from the previous expedition. Here is the first of many scenes where everyone is protective of Kay. They direct her to stay behind ALONE while they go do dangerous man stuff. They must to race back when the something dangerous comes after her.

The guys get on their swim trunks and diving tanks and start exploring the lagoon. They have very questionable diving practices. They don’t stay with their diving buddy, and they stave off the bends by sitting just below the surface of the water for like a whole minute. The creature follows them just out of sight. The divers grab some bones and stuff off the lagoon floor. Once back on board they go below decks to science it out, leaving Kay ALONE AGAIN! She jumps into the lagoon for a graceful swim, which gets the creature’s full attention and the real stalking begins.

The scenery is notable and absolutely beautiful, even in black and white. The creature design is impressive, especially for the time. The gill man is very believable. You never see bubbles or any room in that suit for a dive tank, and they spend a lot of time underwater in this movie.

This movie is an interesting glimpse at 1950s culture. They have the token pretty girl, but she seems to be some sort of science person. She’s just not as important as the guys who hang out philosophizing, arguing and smoking pipes.

This flick is more creepy than campy. There is great tension throughout as the creature relentlessly picks them off while they arrogantly argue options until their survival is seriously in doubt.

Take a look at these and other fun scary movies you may have missed.  Don’t forget to checkout Hoopla where streaming titles are always available free with your library card!