Houses are selling like hotcakes right now and many of us are getting new neighbors. Sometimes the new neighbors aren’t ideal, and sometimes they may even be evil. Read on for my picks of entertaining horror movies about neighbors. 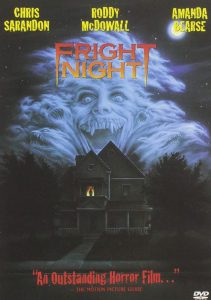 This is an ’80s gem with a great cast. Way before Twilight or Interview with the Vampire, this movie shows up with old school vampire horror lite and avoids feeling cliché. Chris Sarandon plays the eccentric vampire Jerry Dandridge. He has a thing for women who are far too young, is always eating fruit, and is still charming and intimidating.

Dandridge’s teen neighbor Charlie is obsessed with scary movies, especially the old classics hosted by Peter Vincent, played by Roddy McDowall. One night he sees his new neighbors carrying a coffin into their cellar. Charlie now has a new obsession – watching Dandridge. This is way too easy because Dandridge’s bedroom shades, directly across from Charlie’s room, are always open.

Charlie tells his mom, girlfriend Amy and the police about the things he is observes next door. This includes seeing the murder victim from the evening news and hearing screams. Nobody believes him or even seems interested.

Getting too close to a vampire

Evil Ed, Charlie’s friend, offers advice on all things vampire. Now Charlie thinks he’s prepared to handle Dandridge. To his dismay, his mom breaks the number one rule of dealing with vampires – she invites Dandridge to stop by any time. Dandridge winks and tells Charlie he’ll see him soon. Later that night, he offers Charlie the choice to just forget the whole thing. Charlie refuses and manages to convincingly drive him off.

Charlie is now desperate. Amy and Evil Ed visit Charlie’s hero Peter Vincent to help even though they don’t believe Dandridge is a vampire. They set up a meeting to prove he isn’t a vampire. The moment Dandridge see’s Amy he develops a fixation on her becuase she resembles his lost love and he’s a traditional guy/vampire.

Even though vampires are on the table everyone walks home from Dandridge’s house, at night. Charlie walks Amy home giving Dandridge the perfect opportunity to stalk them. He later kidnaps Amy from a dance club.

Charlie and Peter brave the cool creepy old mansion next door to Charlie’s regular suburban home to save Amy. Fright Night is a lot of tongue-in-cheek fun with appropriately clever special effects for 1985. It was remade scarier in 2011 with another great cast including Anton Yelchin as Charlie, Colin Farrell as Dandridge, David Tennant and Toni Collette. 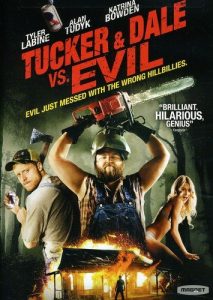 This is a more modern tale of bad camping neighbors. You’ll laugh and gasp in surprise at the bad luck and big gore here. It is kind of a neighbors’ twist giving us the hillbillies’ side of things. The movie came out about 5 minutes before Cabin in the Woods and has a very similar opening.

A ton of college kids packed into an SUV head into the mountains for a camping trip. They notice a couple scary hillbillies on the road and at the gas station beer run. The hillbillies noticed them too. Hillbilly Tucker played by the awesome Alan Tudyk tries to convince his buddy Dale to go and talk to the college girls. “Smile and laugh. It shows confidence.” The hello goes disastrously wrong when Dale leans on the scythe he’s carrying. The college kids freak out, threaten him, and speed off thinking they had a narrow escape.

Dale gloomily returns convinced he’s just a zero with the ladies. The guys drive up to a newly purchased vacation cabin they are excited to use for hunting and fishing. This place screams murder cabin! They are both pretty drunk and decide the bones and murder news clippings mean the former owner was probably an archaeologist news buff.

Nearby the college kids are doing the kind of things you’d expect. They tell scary stories about the Memorial Day massacre 20 years ago today, in this very spot. Then they go skinny dipping as it is getting dark. A bit away from the others one of the girls, Allison falls off a high ledge into the water. The hillbillies are out fishing head over to help pull her out of the water. Her friends, convinced the guys are murdering hillbillies, run away screaming afraid to get captured like Allison. The hillbillies are confounded by this behavior and take unconscious Allison back to their cabin.

The next day Dale explains what happened to Allison and they bond over board games while Tucker begins clearing away dead trees with his chainsaw. This begins the string of many comical misunderstandings resulting in the accidental, self-inflicted deaths and maiming of the college kids as they reluctantly try to save Allison from the hillbillies.

The hillbillies are doing mostly normal stuff around their newly acquired overgrown decrepit property. When they finally witness one of the messy and bizarre deaths, and crazy behavior of the college kids, they decide the kids must have a suicide pact and it is their job to protect Allison. They also try to clean up all the bodies because it is really starting to look bad for them.

Things continue to deteriorate. The college kids get crazier. The bodies and coincidences pile up and everything culminates with an awesome yet not entirely unexpected twist. P.S. I bet the end credits scene makes you rewind. 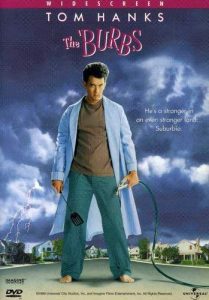 This is one of Tom Hanks earlyish and sadly lesser-known movies. The Burbs is a creepy comedy gem. It is campy horror at its best. All the characters are quirky fun and the villains make you feel like you might be able to best them. The cast is just one great comedy actor after another.

Hanks is suburbanite Ray Peterson who is just starting his vacation and all he wants is to hang around the neighborhood and relax. His wife Carol (Carrie Fisher) is skeptical and long-suffering. She shakes her head, drinks her coffee and makes breakfast like the model ’80s housewife.

As we start to meet the neighborhood Carol might have a point about relaxation being difficult with this group. Troublemaking snoop Art (Rick Ducommun) shows up and eats Rays breakfast while complaining about the new neighbors the Klopeks. They suspiciously have a lot of noise coming from their basement. The Klopeks house and yard have also become broken down and unkempt since they moved in. No one seems to have met them and they have some very unusual habits.

The guys try to introduce themselves but bees attack them on the Klopeks’ porch. They race get help from onlooking neighbors Mark (Bruce Dern) the ex-military arms dealer, his trophy wife Bonnie (Wendy Schaal) and the neighborhood teen Ricky (Corey Feldman). Everyone agrees there is something weird going on next door.

They don’t have to wait long for more strangeness to pile up. The guys see the Klopek teen driving the suspiciously large and body shaped bag of garbage to the curb and beating it savagely into the can. Ray sees them digging large holes in their backyard in the rain in the middle of the night. Then their elderly neighbor Walter disappears and the guys are sure the Klopeks are responsible. They try to gather evidence, but their wives make brownies and go over to introduce themselves.

They meet Hans Klopek (Courtney Gains) and his grumpy, insulting uncle Ruben and the doctor. It is an understatement to say this is an awkward first meeting. Besides the wives, only the doctor makes any attempt at politeness or normal conversation. The doctor says they will all be gone the next day to arrange for another move due to his work.

The wives smugly think the meeting was a success. While Ray and the guys make plans to spend the next day breaking into the Klopeks to dig for Walter’s body. The next day with the power cut and a lookout posted they start digging as Ricky and his friends watch. They dig their way through the yard to the basement that has a giant heater. Art asks, “The thermostat on a home furnace, is it supposed to go to 5000?” After digging in the basement for hours Ray strikes something and everything explodes into chaos just as the Klopeks return with the cops.

The Burbs keeps you guessing who the bad guys really are right up until the end. Are the neighbors evil or are we just overly bored and paranoid?

Take a look at these and other fun scary movies you may have missed.  Don’t forget to checkout Hoopla where streaming titles are always available free with your library card!