Ah Halloween, when we watch as many of the old scary favorites as we can manage and the gems, tarnished though they may be, we have missed. 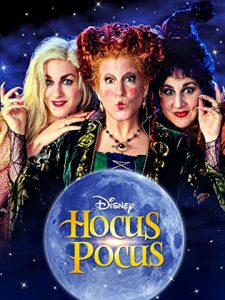 This movie is family friendly and a delight from beginning to end. Teenaged Max and his family moved to Salem and it is Halloween. He is underwhelmed by all the fuss and the historic stories of the three witches, the Sanderson Sisters, who eat children and will some day return to Salem for revenge.

That night Max takes his sister trick or treating and they stop at the house of a girl he likes, Allison. He and Allison take his little sister Dani (charmingly played by a young Thora Birch) to the museum dedicated to the three witches. Max accidentally raises the witches when he is showing off for Allison. They use their knowledge of modern times to escape from the Sanderson Sisters (Bette Midler, Kathy Najimy and Sarah Jessica Parker).

The sisters navigate through modern things like paved roads and public transportation searching for Max and the girls. A cat, who is actually Thackery the brother of the witches first victim, helps the kids. He talks and tells them all about what happened.

They first try to get help from the adults who are all at a town hall dance. That backfires when the witches show up and treat everyone to an awesome song and dance number that hypnotizes all of them. After a few more narrow escapes, the witches kidnap Dani and start brewing enough potion to suck the lives out of all the children in Salem. There is an epic showdown with the 3 crafty lovable witches and some great one liners. 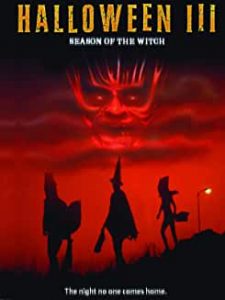 This is a movie you hear a lot of mixed reviews about. It is mocked by many, while loved and lauded by others. This is by far the most off-the-wall movie in the Halloween franchise, which is saying something. You will not find our favorite masked killer Michael Myers, but there are plenty of robots, lasers, BUGS and gore galore.

Our opening pumpkin crawl is a pixelated computer graphic that manages to both give me the creeps and make me feel nostalgic. A man is running down the street on a dark and stormy night. He hides very badly at a gas station and is easily found and strangled by his pursuers. He makes it to the hospital, moaning “they are going to kill us all.” The man has a silver shamrock Halloween mask, the current must have costume, held tightly in his hand. Unfortunately, the bad guys show up and finish the job in a very gory way.

The victim’s waifish daughter Ellie shows up and immediately and inexplicably bonds with the local divorced not quite age-appropriate doctor. They embark upon their own investigation. At her father’s store they discover he was picking up the super popular Halloween masks from the nearby town where they are made when he went missing. The commercial for these masks is on in the background in every other scene counting down to Halloween and promising a big surprise giveaway on Halloween night.

Ellie and the doctor follow in her dad’s footsteps and shack up in the very same motel he stayed. Odd doesn’t even begin to cover this town. There are cameras and loudspeakers everywhere, and there’s a city-wide curfew. It’s a few days before Halloween and Doc and Ellie join a tour of the factory. During the tour they spy some creepy things like lifelike knitting robots and her dad’s car hidden in a garage.

Doc tries to call in reinforcements. Surprise! None of the phones will dial out. Now Ellie is gone. The doc calmly sneaks back to the factory and avoids most of the cameras (he thinks) until the bad guys show up. They drag the doctor to the factory owner who explains his evil plan to sacrifice children for a Samhain ritual on Halloween night. After some melty bug filled gore the doc is able to grab Ellie and escape.

They desperately try to shut down the factory, but the evil company owner has some pretty big surprises planned. Will doc and Ellie save the children or will they be sacrificed?

Once again John Carpenter (producer on this film and director of the first Halloween) comes up with a movie full of a deliciously innocent technology paranoia and catchy if annoying music. The Silver Shamrock jingle will be stuck in your head for all time. You’re welcome. 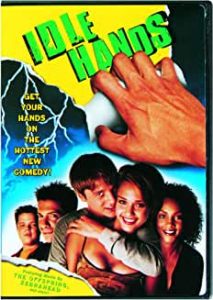 Anton is a teenage slacker. His ideal life is to eat, sleep, get wasted and play video games. He is basically harmless and clueless and doesn’t notice his dimwitted parents appear to be gone (murdered in the opening scene) until he runs out of food. Anton has a crush on his uber cool neighbor (Jessica Alba) who keeps a songwriting journal. He also has two slacker friends who give him mostly useless, though not terrible advice throughout.

Anton slowly notices some things are wrong like his sandwich knife is covered in blood and his cat is playing with someone’s eyeballs. He calls his friends over to help him figure out what is wrong. They figure out it is Anton or more precisely Anton’s hand that is evil.

He tries to control it but his hand goes crazy and kills his buddies. His friends rise from the dead because the music in heaven sounded lame and it seemed very far away so they just came back and hang out with him for the rest of the movie.

Trying to outsmart the demon hand

They decide Anton’s hand must be possessed. The group goes to their metal-head neighbor who listens to Motley Crüe, which they consider devil music. He gives them the tip that idle hands are the devil’s playthings. This leads Anton to do everything he can to keep his hands busy including knitting. This works for a while until some suspicious cops come after him and his hand kills them. They decide the answer is to lop off Anton’s hand this kind of works but the hand then escapes and heads to the school dance where Anton’s crush is meeting him.

The hand causes some general bloody mayhem attacking the band Offspring and the principal Tim Stack. Anton’s crush and her friend escape. During all of this we meet Debi (Vivica Fox) whose family are demon hunters. She has been following the trail of murders. Debi and the metal-head neighbor head to the dance and join the mayhem. She has a special dagger, the only weapon that can destroy the demon. Will she destroy this demon?

This movie is just a silly interesting mix. It’s kind of Cheech and Chong meets the Evil Dead – light and gory fun.

Take a look at these and other fun scary movies you may have missed. Don’t forget to check out Hoopla where streaming titles are always available free with your library card!