This month’s campy movies are all about aliens. Some are a bit scarier than others but they will all give you a good laugh. Beware there are  spoilers. 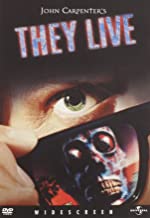 This early John Carpenter hero called “Nada” is played by Rowdy Roddy Piper, legendary pro wrestling heel. It’s the 80s so even though he’s homeless, he’s sporting a perfectly wavy blond mullet and tight jeans. He gets work as a day laborer and meets jaded misanthrope Frank (Keith David). Frank takes him to the homeless tent city where they eat dinner off real stoneware plates while watching the outdoor TV, in the middle of a field, in 1988.

Right away things are fishy. The conspiracy broadcasts on TV are inducing headaches. After a suspicious church across the street is raided Nada goes in and finds boxes of sunglasses. When he puts them on the sunglasses reveal the world has become a subliminal alien nightmare. Advertisements order people to obey, speakers chant “sleep,” and worst of all, most of the rich people are gross slimy skeletal aliens!

Unfamiliar with conspiracy theorist protocol, Nada makes a big fuss and the aliens raise the alarm. When the police show up, they are of course also aliens. Nada spectacularly escapes and politely carjacks a woman named Holly. When he fails to convince her of the alien threat, she shoves him out the window of her hillside condo. He miraculously survives this but loses his glasses.

He finds Frank and they get into a fight over the existence of aliens. After all the biting, board slamming and punching is over, Nada gets sunglasses on him and Frank is convinced. Buddies again they philosophize, trade tragic backstories and work together to defeat the aliens.

This movie is a great ’80s flick! It’s fun, silly and sweet with impressively accurate technology 40 years ahead of its time. I’ll be crossing my fingers for the previewed Apple Watch Secret Escape Portal function. 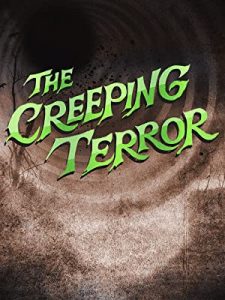 This is a great example of a 1960’s paranoid horror movie. It opens with a handsome clean cut young couple, driving down a dark lonely highway, inexplicably missing the brightly crashing spaceship. We know all this thanks to the narrator who condescendingly keeps us up to date throughout and shares helpful advice.

As the sun rises at the crash site, the awesomely cardboard door on the spaceship opens sinisterly. We hear disturbing high-pitched noises and see a creation that defies description (but I’ll try), which creeps out and away. It looks like a giant, dark, carpet-covered, standing flatworm with a big tarp dragging behind it and lots of flotsam sticking out all over. There is no face really and midway down it’s body is a large puppet like maw, which (spoiler alert) will get used a lot.

After it departs everyone else shows up they find another creature strapped to the wall inside the spaceship. Our random scientist, Dr. Bradford explains he has “orders” to communicate with the creature. Through the rest of the movie, we are treated to a jarring back and forth between the pompadoured good guys and the secretly escaped creature on its slow, creeping rampage.

Although not picky, young lovers seem to be the creature’s meal of choice. It begins with a couple in the woods suspiciously wearing swimsuits, although there is no water anywhere. The creature goes on to eat basically everyone in its path, including “neighbors in the park having a hootenanny.” In all fairness, the minute I heard the narrator say the word hootenanny, I knew those hippies were doomed. All this time the creature is growing, and now looks rather like a large black Swiffer duster dragging a car sized, lumpy tarp behind it.

Will the creature be found and will we learn why the creature was eating people? Yes. This has everything you would want to see – cool cars, an alien you can recreate in your own basement, wooden acting, inflection-less dialogue, and people behaving absolutely ridiculously. 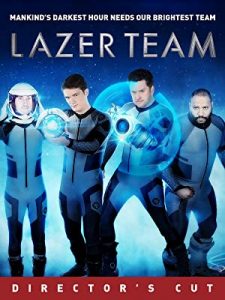 This is the first feature film by the web production company Rooster Teeth. As the movie opens, we read that SETI received a signal saying a fight is coming, but also friendly aliens are sending a super suit to help us win the battle. It arrives tonight!

Next our soon to be team is assembled. As Sheriff Hagan makes his rounds for the night, he tazes and hauls away a rowdy quarterback to the unanimous applause of onlookers. He then moves on to subdue two guys shooting off illegal fireworks. When they see the sheriff, they light the biggest firework they have.  Which hits the alien craft bearing the suit and knocks it out of the sky.

Now together our four lovable losers wander over to investigate and each of them involuntarily acquires a piece of the suit – super speed boots, a laser gun, a shield and a smart helmet. They think this is great until the pieces of the suit clamp down and can’t be removed.

When the military comes looking for the suit they find the guys permanently attached to it. The soldiers  reveal the bad aliens will arrive in 5 days to do battle until death and the loser’s planet will be destroyed. When their attempts to train the guys fail miserably they decide to salvage the suit and save the planet. The guys overhear the plan to cut them out of the suit and escape.

While they are hiding out the now socially networked and self-named Lazer Team is attacked by Mindy, the Sheriff’s daughter. She is being controlled by little alien robots. They fight to save Mindy and learn to work together becoming a real team.

Lazer Team now makes the difficult choice to save the earth. When they overcome their reluctance to die, they head to the football stadium for their final showdown with the big bad alien monster and a few surprises.

Way more funny than scary, this is pretty good modern Sci-Fi well worth a watch.