If you’ve ever had a packet of honey mustard sauce hurled at you by an angry customer; if you’ve had your bathroom breaks timed to the very second; if you’ve ever wept at work in physical pain or screamed to the universe in a walk-in cooler, then you know what it means to be a low-wage service worker in America. For those lucky enough not to know the dehumanizing indignities of low-wage work, journalist Emily Guendelsberger will make you feel every throbbing spasm and every demeaning insult in her book On the Clock: What Low-Wage Work Did to Me and How It Drives America Insane. 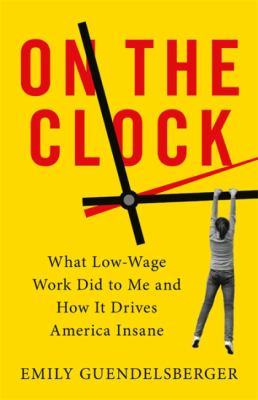 After being laid off from her newspaper job, Emily Guendelsberger decided to find out what the experience of low-wage service work really feels like. Think of it as a Nickel and Dimed for today, but instead of working as a waitress, a cleaning woman and a sales clerk at Walmart, Guendelsberger worked at an Amazon fulfillment center, a call center and a McDonalds.

Each job was truly another circle of hell. As a “picker” at Amazon, the scanner gun knew every move she made as she maneuvered her pick cart through tiers of yellow totes. In constant pain after walking and squatting hour after endless hour, Emily also struggled with the soulless isolation of rarely seeing another worker. At the AT&T call center in North Carolina frantic multi-tasking was the name of the game as she had to pull up all the customer’s correct information on an antiquated system while solving the caller’s problem, AND sticking to the script, AND making conversation, AND trying to make a sale. As a people-pleaser, McDonald’s was almost a pleasure after her first two jobs until she lost her temper after being pelted with honey mustard sauce.

Of course all this is really sobering to read about (and oh the guilt when I placed an Amazon order after reading the chapters about Amazon!), but On the Clock is also surprisingly funny. Guendelsberger never belittles the real struggles of her coworkers who have no other choice but to accept these high-stress, low-paying jobs, but her own reaction to each job was one we would probably all share: “I get to leave.”