In September 1944 the Gestapo came for Fey von Hassell and her children. For years Fey, the daughter of Hitler’s Ambassador to Italy, had lived peacefully on her husband’s beautiful estate in the north of Italy. But now the beautiful young mother could only watch, helpless, as her two little boys were dragged away panic-stricken and crying. Then the Gestapo drove Fey to prison where she was placed in a tiny, freezing cell to await her fate. Fey and her children had been inexorably drawn into the Nazi terror machine. 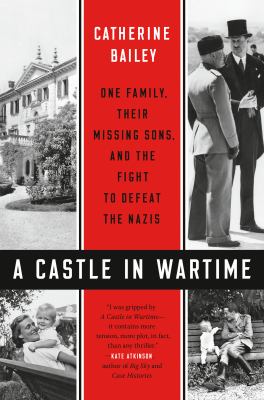 Fey and her children were the unwitting victims of Sippenhaft: Hitler’s policy that relatives of persons accused of crimes against the state were also responsible for the crimes. Because Fey’s father conspired against Hitler and was later executed for his crime, Fey would join other “kinsfolk” – parents, siblings, even cousins! – of conspirators on a bizarre and treacherous journey through wartime Germany.

From the filthy Gestapo prison in Innsbruck Fey was sent to a luxurious mountain hotel then to specially commissioned barracks near the Stutthof concentration camp. Other concentration camps would follow, Buchenwald, Dachau, where the kinsfolk could smell the burning bodies from the crematoria. Although the kinsfolk were not subject to the horrific conditions of other prisoners, they still faced the terrible uncertainty of their fate. And for Fey, a special torment: what happened to her beloved children? Would she ever see her boys again?

In A Castle in Wartime: One Family, Their Missing Sons, and the Fight to Defeat the Nazis, Catherine Bailey skillfully tells the nail-biting story of one woman’s harrowing ordeal in Nazi Germany. Using Fey’s own diaries, letters and memoir as well as other primary sources, Bailey vividly recreates Fey’s astonishing and suspenseful story.