Everyone will find something they want to read in my picks for new May fiction. Choose from rom-com, fantasy, thriller, soap opera and a feel-good read. You might want to put all of them on hold to fit every mood.

Bestselling rom-com author Emily Henry is back with another charming and clever beach read, Book Lovers. Well-loved YA fantasy author Holly Black will lead you through adventures and drama in a magical world of secrets and thievery in her adult debut Book of Night. Get ready for a gripping, dark and unpredictable tale of survival in The Island by Adrian McKinty. Sinister and deadly secrets will be revealed in the sultry, soapy thriller My Summer Darlings by May Cobb. The Messy Lives of Bookish People by Phaedra Patrick will warm your heart as you follow the lives and connections of a famous author and a want-to-be author. Read on to explore my picks for May’s new releases. 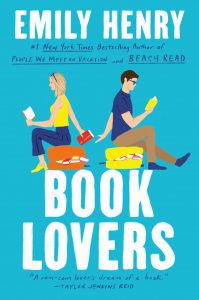 Nora is a cut-throat literary agent and not your typical heroine. Her authors and her little sister, Libby, are the only people who think she’s any kind of heroine. Nora is fine with that.

She agrees to take a girls’ trip with her sister to a small town in North Carolina. This fun relaxing trip is frequently interrupted when Nora keeps running into a brooding editor, Charlie. She knows him from New York and they are not fans of each other. How will all these run-ins change the way they feel about each other and even how they see themselves?

“Book Lovers is a rom-com lover’s dream of a book. It is razor-sharp and modern, featuring a fierce heroine who does not apologize for her ambition and heartfelt discussions of grief. Readers know that Emily Henry never fails to deliver great banter and a romance to swoon over but this may just be her best yet. A breath of fresh air.” —Taylor Jenkins Reid, New York Times bestselling author of Malibu Rising

“Charming, earnest and clever, Book Lovers is Schitt’s Creek for book nerds. A total delight for anyone who’s ever secretly rooted for the career girl in a Hallmark movie. Nobody does it quite like Emily Henry.”
—Casey McQuiston, New York Times bestselling author of One Last Stop

2. Book of Night by Holly Black 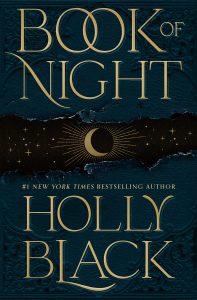 She’s spent half her life working for gloamists, magicians who manipulate shadows to peer into locked rooms, strangle people in their beds or worse. Gloamists guard their secrets greedily, creating an underground economy of grimoires. They need Charlie Hall to rob their fellow magicians.

Charlie’s trying to distance herself from past mistakes, but getting out isn’t easy. Bartending at a dive puts her too close to the corrupt underbelly of the Berkshires. Her sister Posey is desperate for magic. Charlie’s shadowless and possibly soulless boyfriend has been hiding things from her. When a terrible figure from her past returns, Charlie descends into a maelstrom of murder and lies.

Determined to survive, she’s up against a cast of doppelgangers, mercurial billionaires, gloamists and the people she loves best in the world. They are all trying to steal a secret that will give them vast and terrible power.

“If Neil Gaiman channeled Stephen King, the result might be this book . . . scintillating prose, whiplash twists, and a voice of character that demands to be heard from again.” –James Rollins, New York Times bestseller of The Starless Crown

3. The Island by Adrian McKinty 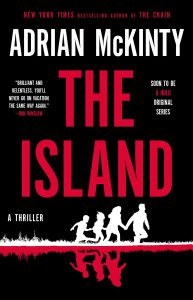 It was just supposed to be a family vacation. A terrible accident changed everything. You don’t know what you’re capable of until they come for your family.

Read this before the Hulu series is released.

Heather recently married Tom, a widowed doctor with a young son and a teenage daughter. The new family sets off on vacation to the Australian outback. They talk their way on to a ferry to Dutch Island, a remote place run by a tightly knit clan of locals and off-limits to outsiders. A shocking accident propels them from a unsettling situation to a nightmare.

Heather and the kids are forced to escape without Tom. She must now save herself and the kids, who don’t trust her, from the locals.

“Heart-stoppingly tense and unpredictable, The Island twists a family vacation to a nightmarish breaking point. Adrian McKinty has written another irresistible and pulse-pounding thriller about the surprising places evil hides and just how far we’ll go for those we love.” ―Karin Slaughter, New York Times bestselling author of Pieces of Her

4. My Summer Darlings by May Cobb 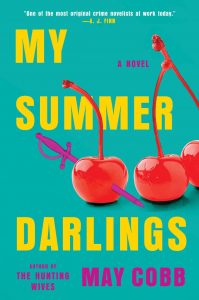 Named “A Most Anticipated Novel of 2022” by Crime Reads & Goodreads.

Jen, Kittie and Cynthia have been friends since childhood. At almost 40 they are still living in their East Texas town that’s feeling too small and ordinary. They dish about the other women in town and gripe about their ungrateful teens.

When a new man, Will, moves to town they are all fascinated by this mysterious charming edition to their lives. However, this fascination turns to obsession, which threatens all three women’s families and friendships.

Suddenly Will pulls away and the friends uncover sinister and deadly secrets.

5. The Messy Lives of Book People by Phaedra Patrick 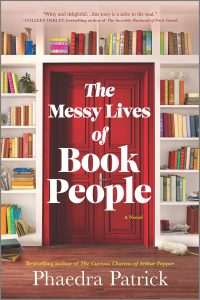 Mother of two Liv Green barely scrapes by as a maid. She often escapes in a good book while daydreaming of becoming a writer herself. Liv is excited when she lands a job housekeeping for her personal hero, mega-bestselling author Essie Starling. The author is a mysterious and intimidating recluse. Liv finds she is the only person Essie talks to, which leads to a tenuous friendship.

When Essie dies suddenly, Liv is astonished to learn her dying wish was for Liv to complete her final novel. As Liv begins to write, she uncovers secrets that reveal a surprising connection between the two women. One of these secrets will change Liv’s own story forever.

“The Messy Lives of Book People is the perfect book if you need a lift, or to feel better about the world. It’s a read-in-one-sitting-while-smiling kind of a story. Just lovely.” –Claire Pooley, bestselling author of The Authenticity Project