Pass the popcorn – er, jellybeans – and join Nancy and the Gipper at Camp David for a Friday night flick. You’ll laugh! You’ll cry! You might even gain some insight into the Reagan administration and the Reese’s Pieces-eating, school-skipping, Communist-hating movies that defined a decade. 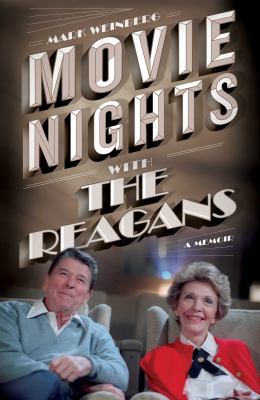 As a young White House press aide, Mark Weinberg watched hundreds of movies with the Reagans. From major feature films of the 1980s such as E.T. and 9 to 5 to golden oldies starring – you guessed it! – Ronald Reagan and Nancy Davis, movie nights played an important role in the Reagan administration. More than just entertainment, the films not only allowed two Hollywood veterans to reminiscence about the movie industry, but in some cases influenced the Reagans’ thinking about world events.

In his warm and informative memoir Movie Nights with the Reagans, Weinberg selects 20 films, sets the stage with a snapshot of national events or personal issues with the Reagans, and then briefly discusses the plot and the critical reception to each movie. The real heart of each chapter is the Reagans’ personal reaction to the movies and how it reinforced or changed their thinking on many issues. For example, the chapter on Chariots of Fire leads to a discussion of Ronald Reagan’s close political friendship with Margaret Thatcher and the chapter on Top Gun explores the Reagans’ relationship with the military.

Whether you’re feeling nostalgic for the president, the decade or those great ‘80s movies, Movie Nights with the Reagans is a unique and entertaining way to revisit the Reagan years.