Under the searing heat of the summer sun, custom harvesters cut field after field of ripening wheat from Texas to Idaho. At the invitation of a conservative farmer and family friend, writer Marie Mockett joined a harvesting crew for one season to learn not only about farming, but also to explore the divide between city and country, liberal and conservative. 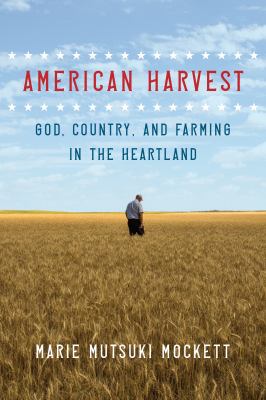 That’s how the Whole Foods shopping, college-educated, non-believing, half-Japanese liberal found herself in America’s wheat heart. With a crew of mostly Anabaptist young men, she spent long days in the fields, wet days in dying towns, and Sundays in the local churches. Curious to know more about their evangelical beliefs, she questioned everything from their support of GMOs and Roundup to evolution and the existence of hell.

American Harvest is an absorbing read, but it’s also hard to categorize. Readers will get a behind-the-scenes look at harvesting. If combines and custom crews pique your interest – and I know they do! – I recommend watching The Great American Wheat Harvest. It’s also an enjoyable fish-out-of-water memoir, as the city-dwelling Marie can’t help but marvel at the novelty of shooting wild pigs, or the glorious sunsets, or seeing John 3:16 everywhere. Mostly though, American Harvest thoughtfully explores beliefs about farming, food production and Christianity.