I’ve found some amazing new books this month with three mysteries, a suspense and one historical novel. My first pick for January is The Maid, a cozy mystery with a wonderfully quirky character at the center. Author David Guterson’s new literary thriller The Final Case is his first courtroom drama since Snow Falling on Cedars. Next Find Me is a suspenseful, twisty mystery about memory, friendship and secrets. Delve into the Great Depression and learn why North Carolina is called the Tar Heel state in The Saints of Swallow Hill. Follow a tough LAPD detective Margaret Nolan through a tangled crime novel in Desolation Canyon. Read on to learn more about these January new releases I’m recommending.

1. The Maid by Nita Prose 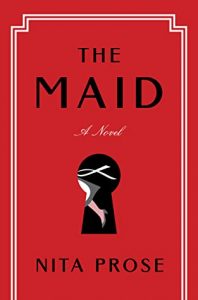 Molly Gray struggles with social skills and often misreads people. Her gran helped her understand the world with simple rules for behavior. However, her gran died a few months ago and 25 year-old Molly is navigating life’s complexities on her own. She is focused on her job as a hotel maid, which seems like the perfect job because she loves order, tidiness and proper etiquette.

Molly’s life is  upended when she finds wealthy Charles Black dead in his chaotic suite. The police are looking at her as the main suspect because of her unusual demeanor. Molly’s suddenly caught in a web of deception. Fortunately, friends Molly didn’t know she had are united in searching for clues to find the real killer.

“An eccentric and unforgettable sleuth who captivated me and kept me furiously turning the pages.”—Sarah Pearse, New York Times bestselling author of The Sanatorium

“The Maid is a masterful, charming mystery that will touch your heart in ways you could never expect. The endearing, unforgettable Molly reminds us to challenge our assumptions about one another, and shows us how meaningful it is to feel truly seen in the world.”—Ashley Audrain, New York Times bestselling author of The Push

2. The Final Case by David Guterson 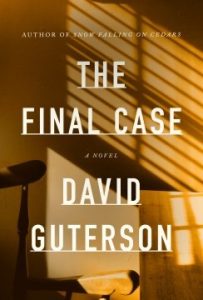 In Guterson’s first courtroom drama since Snow Falling on Cedars, police find a girl dead just a few feet from her back door on a rainy night. The girl is Abeda who was born in Ethiopia and was adopted by white conservative fundamentalist Christians Delvin and Betsy Harvey. Police charge the Harvey’s with Abeda’s murder.

Royal, a Seattle criminal attorney in the last days of his long career, takes the Harveys’ case. As an octogenarian without a driver’s license, Royal leans on his son—the novel’s narrator—as he prepares for trial.

“A beautiful, heartfelt novel. Guterson’s tale swirls and loops and soars and digresses, gradually pulling you, like a vortex, closer and closer to eternal truths about death and life, hate and love. Especially love.”—Daniel James Brown, author of #1 New York Times Bestseller The Boys in the Boat

“[An] outstanding literary thriller . . . Equal parts philosophical, humane, and self-deprecating, it powerfully speaks to the ineffable contradiction of living a meaningful life. Guterson sensitively explores religion, white privilege, and justice while examining with realism and empathy the bond between parents and their children. With its simple message of hope, this novel will linger with readers long after the final page.”

3. Find Me by Alafair Burke 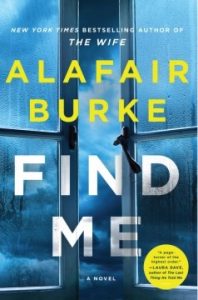 She calls herself Hope Miller, but she has no idea who she actually is. Fifteen years ago, she was found in a small New Jersey town thrown from an overturned vehicle, with no clue to her identity. Doctors assumed her amnesia was a temporary side effect of her injuries, but she never regained her memory. Hope eventually started a new life with a new name in a new town that welcomed her. However, she always wondered what she may have left behind or been running from. Now, she’s leaving New Jersey to start over once again.

Manhattan defense lawyer Lindsay Kelly, Hope’s best friend and the one who found her after the accident, understands why Hope wants a new beginning. But she worries how Hope will fare in her new East Hampton home, far away from everything familiar. Lindsay’s worst fears are confirmed when she discovers Hope has vanished without a trace. The only lead is a drop of blood found where she was last seen. Even more ominously, the blood matches a DNA sample with a connection to a notorious Kansas murderer.

Lindsay calls NYPD homicide detective Ellie Hatcher, the daughter of the cop who dedicated his life to hunting the Kansas killer. Ellie has always believed there was more to the story of her father’s death 20 years earlier. She now fears Hope’s recent disappearance could be related.

In pursuit of answers, the women search for the truth beneath long-buried secrets. When their searches converge, what they find will upend everything they’ve ever known.

“Alafair Burke’s latest propulsive thrill-ride is a suspenseful, twisty mystery about memory, friendship and secrets. A page-turner of the highest order.” -Laura Dave, author of The Last Thing He Told Me

4. The Saints of Swallow Hill by Donna Everhart 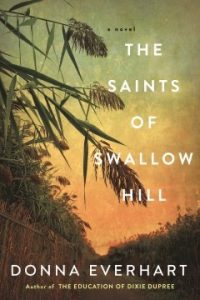 Rae Lynn Cobb and her husband, Warren, run a small turpentine farm in the dense pine forests of North Carolina during the Great Depression. She spent her childhood in an orphanage and now she’s thankful for the hard and dangerous work of drawing sticky sap out of trees and refining it. Rae Lynn’s also thankful for her kind but careless husband.

After Warren’s negligence, Rae Lynn must disappear to keep herself from jail. She disguises herself as a man named Ray and heads for the Swallow Hill turpentine camp in Georgia. The camp is isolated and squalid, and commissary owner Otis Riddle takes out his frustrations on his wife, Cornelia. Although Rae Lynn works tirelessly, she becomes a target for Crow, the ever-watchful woods rider who checks each laborer’s tally. Del, who came to Swallow Hill hoping for his own redemption, offers “Ray” a small measure of protection. As Rae Lynn forges a friendship with Del and Cornelia, she envisions a path out of the camp. But she will have to come to terms with her past, with all its pain and beauty, before she can open herself to a new life.

“The distinctive setting of the turpentine camps in the South during the Great Depression will make an imprint on readers, just as the characters of Rae Lynn and Del do. Fans of Sarah Addison Allen won’t be able to put it down.” —Booklist 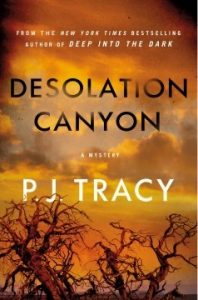 LAPD Detective Margaret Nolan is struggling after the death of her brother in Afghanistan and taking a life in the line of duty. Nolan dreads her days off because they give her too much time to think. After cocktails with a colleague at the luxurious Hotel Bel-Air bar she strolls through the grounds and discovers the body of a successful attorney who made his fortune in international trade.

It initially appears to be death by misadventure. However, the case is not straightforward. After a series of shocking revelations, Nolan is confronting a sinister cabal that might destroy her and everyone she loves.

“Nolan returns in [Desolation Canyon], and it’s even better than the first. . . Fans of the Monkeewrench novels, which also feature a tough, no-nonsense female protagonist, should find the Nolan books very much up their alley.” ―Booklist