On a windy September day in 2005 four male adult chimpanzees frolicked through the tiny town of Royal, Nebraska. The chimps sampled strawberry patches, swang on tire swings, and played on children’s swing sets. The alarmed residents cowered inside their houses and cars. The chimps, well-known residents of the local zoo, hooted and paced, breaking glass and rattling doors. At Zoo Nebraska the frantic zoo director loaded the tranquilizer gun. The zoo was understaffed, underfunded and woefully underprepared for any animal escape. Local men grabbed their hunting rifles and headed for the streets of Royal. Bullets, not tranquilizers, would be the answer. 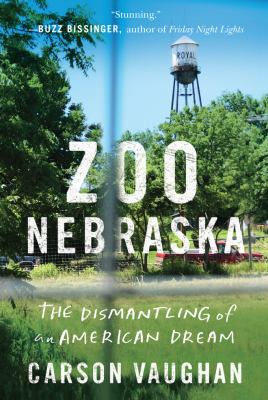 The tragedy of the chimp escape is just one part of Carson Vaughan’s engrossing Zoo Nebraska: the Dismantling of an American Dream. The bigger and equally interesting story is how a village in rural Nebraska farmland came to be the site of a once flourishing zoo. Smitten with primates from an early age, Dick Haskin dreamed of opening a first-class primate research facility. In 1986 Haskin opened his Midwest Primate Center in Royal with a diapered, adolescent chimp housed in a converted trailer home.

By 2004, Zoo Nebraska had 60 animals, 17,500 visits and a spiking membership. They also had reciprocity agreements with other zoos, including the world famous Henry Doorly Zoo in Omaha. After Dick Haskin left, the zoo was plagued with poor management, small-town politics and no zookeepers with meaningful experience caring for chimps. Zoo Nebraska’s decline led to the tragic escape of the chimps.

Zoo Nebraska is truly a poignant story of the demise of one man’s dream and the cruel end to a zoo that was opened with the best intentions.