It was the stuff of fairy tales. In a modest farmhouse in northern Ontario a young mother gave birth to five identical dark-eyed, dark-haired girls on May 28, 1934. As Dr. Dafoe and several nurses labored to keep the tiny babies warm, fed and healthy in the primitive farmhouse kitchen, the world took notice since no set of all identical quintuplets had ever survived infancy. Miraculously all five girls survived and the Dionne quintuplets – Yvonne, Annette, Cécile, Émilie and Marie – would become Canada’s little princesses, rich, adored and world famous. 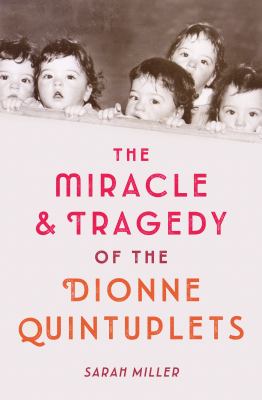 As with so many fairy tales, darkness permeates the story. In The Miracle & Tragedy of the Dionne Quintuplets Sarah Miller explores how the girls were exploited almost from the moment of their births. Placed in a specially-built nursery after the Ontario government seized custody, the Dionne sisters were isolated from their parents, cared for by nurses and controlled by Dr. Dafoe. A bigger tourist attraction than Niagara Falls, visitors by the thousands flocked to gape at the Dionne sisters through a specially-constructed observation area while companies vied for their endorsements. Photographed and filmed, sheltered and objectified, the Dionne quintuplets were adorable, chubby-cheeked cash cows.

Then the “miracle babies” became teenagers. After being returned to their parents, the girls struggled to fit into a family that was virtually unknown to them. Abused by their father, treated coldly by their mother, the Dionne quintuplets could only rely on their unique bond as they became adults. This true story of the Dionne Quintuplets is, just as the title suggests, a miracle AND a tragedy but most of all a fascinating look at five little girls who once were a world-famous novelty.

Readers interested in the Dionne quintuplets may enjoy Shelley Wood’s novel The Quintland Sisters that tells the story of the sisters through the eyes of a fictional midwife. The marvelous Louise Penny also based her fictional Ouellet Quintuplets on the Dionne sisters in her novel How the Light Gets In.