What do you picture when you think of Saint Patrick’s Day? Likely it brings to mind music, dancing, drink and an oversupply of the color green. Having grown up in a very proud Irish household, I think of all those things when I think of celebrating Saint Patrick’s Day, but I also think of the history and the art of the Celtic people.

Who were the Celts? 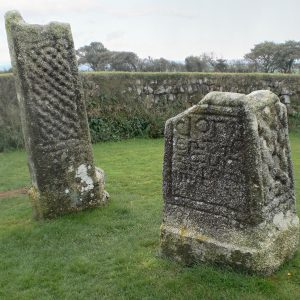 Although we now think of Ireland, Scotland, Wales and England when we talk about Celtic culture, the Celts actually have their roots in central Europe. Celtic tribes migrated through western Europe in 1200 B.C., spreading their art and language through Spain and France, and eventually Britain and Ireland.

The Celts were known for their intricate metalwork, ornamental designs and artistic symbolism. This style is still practiced today and has gained popularity in mediums from clay and metal to tattoos and complex coloring sheets. 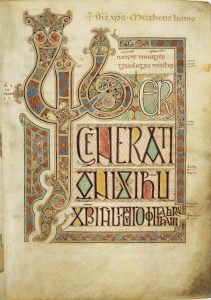 A page from the Book of Kells

Do you like scribbling in the margins of your notes and books? So did Irish Celtic missionaries in the Middle Ages! This art form, known as manuscript illumination, was often found in religious texts to elevate the reader’s experience. It also helped nonliterate readers follow the religious message being shared. Although not every illumination matched with the story on the page. One of the most famous illuminated manuscripts is the Book of Kells.

There are lots of great instructions available for creating your own illuminated manuscript, but I especially love this guide from the British Library. Looking for something a little simpler? This video guide from St. Patrick’s Cathedral in Dublin is doable for all ages. 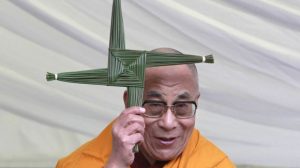 Many people are familiar with the outline of a Celtic cross, a ringed cross often found as markers in cemeteries. Less known is the Brigid’s cross, named after Saint Brigid and often made from woven rushes on the Gaelic festival Imbolc. The cross can be made out of reeds, straws, paper, chenille stems/pipe cleaners, or any rigid but bendable thin material. The Irish Peatland Conservation Council has clear written instructions and a video on how to make the cross. You’ll find step-by-step photo instructions on Colorful Crafts. 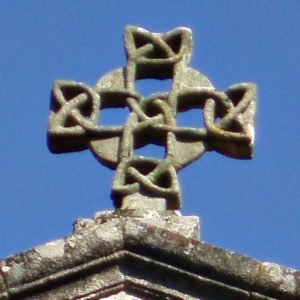 An example of a four-point Celtic knot

Celtic knotwork is intricate and can add detail to macrame and rope art. It can also be incorporated into jewelry through metal or wirework. This Instructables guide takes you through the steps of tying a Celtic heart knot or love knot. Celtic knots often use patterns of three to represent trinities, or patterns of four to represent the four elements. The knots are also popular symbols for tattoos. 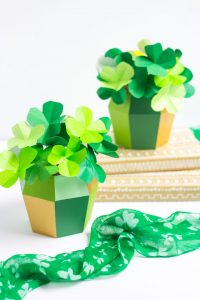 A pot of origami paper shamrocks

No Saint Patrick’s Day would be complete without the shamrock, a major symbol of Ireland. It again brings in the important symbol of three and has the added benefit of being green.

So what really is the deal with green being an Irish color? Ireland’s nickname is the Emerald Isle due to its rolling green pastures. The Irish flag has stripes of green representing the Catholic faith, orange representing the Protestant faith, and white between symbolizing peace. Get your green on with these fun paper origami shamrock pots from Design Improvised.

Last, but not least, there are some beautiful adult coloring sheets available to celebrate Celtic art and style. Super Coloring has a variety of free coloring sheets inspired by Celtic and Irish art.

And just remember when it comes to any of your crafting – Tús maith leath na hoibre. A good start is half the work!

Debbie Stanton supervises the Information and Learning team in Public Services. She supports and mentors our staff in the Topeka Room, Baker Genealogy Center and Alice C. Sabatini Gallery along with the Business and Careers team, Community Connections team and reference staff.