While unpacking the art for the Unearthed exhibit, I found something that truly makes me love my job for its own pure weirdness.
Steven Kutcher is Hollywood’s insect wrangler. Hollywood films that use insects very likely have his name in the credits. He works with many types of insects to get the film shots the directors need. He also works with his insects to create art. He uses water-based gouache paints, putting the paint on the insects’ feet, and guides the bugs as they walk around on watercolor paper. The images are colorful semi-abstracts, almost like Jackson Pollock paintings. 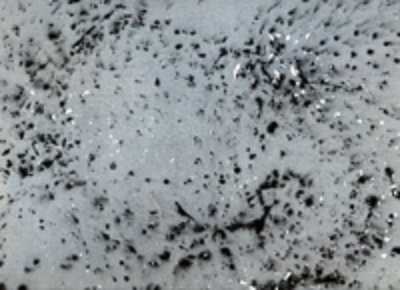 Kutcher’s paintings sometimes evoke an image, and he’ll use that for the title. The painting in question is titled “Goldfish.” The main line twists around, and kind of imitates the shape of a fish and its tail.

So here’s the weirdness: I was matting and framing this painting, when I noticed a small, dead, dried-up smashed silverfish on the paper. Under normal circumstances, I would brush this away. However, this was the question: was it supposed to be there?
There are precedents. Artists have used weirder materials in their work for the past hundred years: trash, ‘found objects’, body fluids, elephant dung, taxidermed animals, you name it. AND, there are precedents in this very exhibit: another artist, Jennifer Angus, uses the bodies of insects pinned to the wall to create wallpaper-like patterns. So it is entirely possible that this silverfish might be intentional. If I remove it and it IS supposed to be there, I’ve damaged a work of art in my care.
I looked at the loan form. Steven credits the insect he works with as part of his creation. Darkling beetles, mealworm beetles, houseflies, honeybees. He doesn’t tend to use insects as small as silverfish because the lines and patterns wouldn’t be very big. And this form said “Darkling beetle, gouache on watercolor paper.” Not “Darkling beetle, gouache, and collage on watercolor paper” or “Darkling beetle, dead silverfish, and gouache on watercolor paper.”
So I asked the artist. Steven appreciated that I checked with him, but in fact the silverfish was not supposed to be there. He asked me to remove it, and I confirmed that the bug had not left any imprint on the paper. Since he works with insects, he doesn’t spray his house. Silverfish can be a problem because they like paper.How many jobs are there, in the whole world, where the answer to this question could possibly be yes?
One: and it’s mine.

Our library has a very cool art collection, and I get to be in charge of it. I started drawing when I was 4 years old, and never stopped making art. I want to do more than show you art, I want to help you understand it, relate to it, and 'get' it. Art lets us share what it is to be human.

2 thoughts on “When does a bug not belong in bug art?”