The Forming Fiber exhibit in the Alice C. Sabatini gallery focuses on artistic and experimental uses of fiber. Metal, resin or animal fur becomes a fascinating creative object. On the opposite end of the fiber spectrum are the types of textiles we see, touch and use every day. I’ll take a closer look at how they’re made as a handcrafted hobby and talk about my experiences crafting in public. 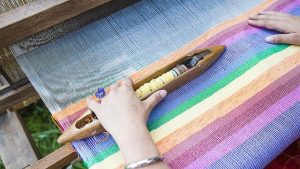 Someone (not me) weaving on a loom.

Weaving and knitting were done by hand for thousands of years before machines were invented. They’re still done by hand as hobbies. For either one, you need yarn or thread that has already been spun. (More on spinning later.) Weaving is done on a loom. There is such a thing as a pocket-sized loom, but generally looms at least need a table to sit on and some take up entire rooms. It’s not the most portable hobby. Knitting by hand is done with two (or more) pointy sticks, called needles even though they don’t have an eye you thread like a sewing needle. It’s not expensive to get started and it doesn’t take up much space, unlike a loom.

I admit I’ve never learned to weave (yet?!), but I’ve been knitting for many years. I’ve also dabbled in other fiber crafts like crochet, embroidery, cross stitch, sewing, quilting, macrame and probably more I’m forgetting about. So I am biased.

I hate waiting and I’m not very good at sitting still so I often bring a project with me when I know I’ll be stuck somewhere for a while. I’ve learned two things from this. One, a lot of people have no clue about fiber crafts. The other is crafting in public is an excellent way to meet like-minded folks.

Let me guess what you’re doing 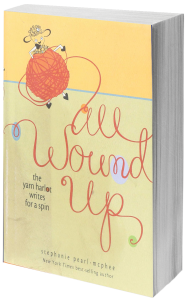 I’ve had some funny encounters when people guess what I’m crafting. I was working on embroidery one day when a neighbor stopped by and tentatively asked me how my crochet was going. He at least sounded uncertain, which is not always the case. I always think of Stephanie Pearl-McPhee, a knitting humorist and author of several books about knitting, who has had people insist she was crocheting! That’s some serious overconfidence. (She writes about one on her blog. Don’t let the blog name Yarn Harlot fool you, there is absolutely nothing scandalous there.) People will also ask if you’re knitting a scarf when you’re clearly holding something that’s sock shaped or is three-quarters of an adult sized sweater.

What the heck are you doing? 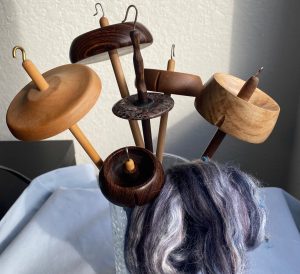 These are my spindles. The stone one has tiny fossils in it.

The strongest reactions I have had while crafting in public have been to spindle spinning. Most people are familiar with the concept of a spinning wheel from the fairy tale Sleeping Beauty where the princess is cursed to prick her finger on a spindle, causing her to sleep until her prince finds her. There the word “spindle” is used to mean a part of a spinning wheel, not a separate tool for spinning. When I say spindle, I mean using a drop spindle that’s made from a stick and a weight. The weight is called a “whorl” and can be either at the top or bottom of the stick. 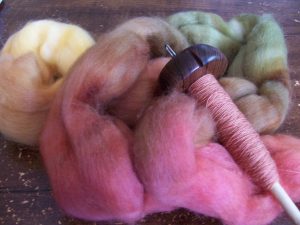 Spindle with wool, the wool fluff that comes in one big long piece like that is called “roving.”

You spin the stick and pull the fiber into a long, thin, strand at the same time. The spinning action twists the fibers together to make a thread or yarn. It takes practice to get the hang of it, but it doesn’t take any special talent, just a little patience. One year when I was spinning a lot, I took a spindle on vacation with me, and spun while waiting in the airport. Well, I might as well have sprouted horns.

I hadn’t thought about the fact that most people have never seen someone spinning. I also wouldn’t have thought they’d feel so comfortable just staring! Perhaps they were hypnotized by the motion of the spindle. Only a couple of people had the guts or curiosity to ask me what I was doing. I don’t recommend spinning in public unless you don’t mind lots of looks. 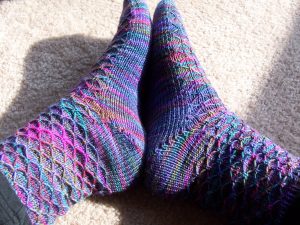 I knit these fancy socks!

On the flip side of strange interactions, you will definitely connect with other crafters if you’re crafting in public. A couple people approached me in that airport when I was spinning and knew exactly what I was up to. Knitters gravitate toward other knitters. At library conferences sometimes I can tell someone hand knit their sweater or accessory and I might ask them about it.

I’ve also had pleasant encounters with people who don’t craft. While I was knitting on a train, a toddler sitting across from me loudly said to her dad, “She’s sewing a sock!” I was pretty impressed she knew what sewing looked like at her age. I let her look at my knitting and feel the yarn.

Here’s my brief guide on how to tell what craft someone is probably doing:

I say “might,” because there are lots of less common techniques that might not look like this. There are also other fiber crafts that do look like this but aren’t as well known, like tatting and bobbin lace making. So while you might not be sure, you can at least make an educated guess if you decide to engage a public crafter.

If you decide to try a craft, I recommend you practice in private before taking the plunge into crafting in public. Meanwhile, I encourage you to look a bit closer at the cloth and fabric around you. Check out some of the books, ebooks and DVDs listed below to see textiles from around the world, or learn how to make them yourself.

The library has art and craft kits for you to try out knitting, weaving, and other textile crafts. Brea has a great article to help you get started weaving and recommends books, videos and tools to create fiber crafts.

My favorite learn-to-knit resource is the free website Knitting.com. There are also lots of knitting instructional videos and ideas on Creativebug, which is free with your library card.