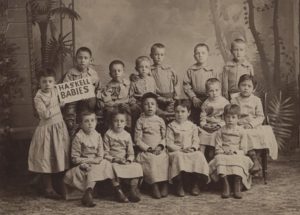 Group of Native American children at Haskell Institute, Lawrence, Kansas, between 1880 and 1889. One of the children, is holding a sign “Haskell Babies”. Photo from the Kansas Historical Society.

Dr. Eric Anderson, professor at Haskell Indian Nations University, discussed resettlement and re-education of Indians in Kansas 1830-1900 at the March 1, 2022 League of Women Voters Topeka-Shawnee County Tuesday Topics. We’ve included highlights of the presentation below. The library is a partner with the League of Women Voters in sharing nonpartisan civic information.

Anderson explained the title of his presentation. “Resettlement” refers to Native Americans being displaced due to white demands, treaties and removal policies. They had settled the area long before white settlers arrived. A map of the first native people to settle in Kansas included Pawnee, Cheyenne, Arapaho, Kansa, Kiowa, Comanches and Osage. New native groups moved in and the older groups were pushed out.

Missionaries wanted to re-educate the natives so they would become Christians, accept white ways, and forget their native culture and religious beliefs. Removing children from their homes and separating them from the traditional native culture was an important aspect of the mission schools.

The first Indian school in Kansas was located in Fairway and founded by Rev. Samuel Johnson at the Shawnee Indian Mission. Johnson County bears his name.

Haskell Indian boarding school began in 1884 when the federal government opened three such schools in Kansas, Nebraska and Oklahoma.  The schools followed the R.H. Pratt Carlisle model. Pratt used photographs to show his success in “civilizing” the Indians whose culture whites disdained. A coined saying was “Kill the Indian and Save the Man.”

Curriculum at the schools focused on trade and shops were organized by gender. For a short time the schools initiated an expanded curriculum, including shorthand, but they reverted to teaching the trades. Much of the students’ work was drudgery – laundry, painting, carpentry and building fences. Students were in basic studies half the day and in the shops the other half day. Boys also worked on the school farm.

Students were expected to attend church regularly. Haskell has a history of an interest in sports, especially football and basketball. Environmental factors at the school – crowded dormitories, cold weather and poor nutrition – led to disease, illness and the death of many students.

According to Dr. Anderson, “The story of Indians in Kansas is one developing out of colonial history and conflict in the East that replayed in the West as the frontier continued to shift and the nation grew. It is also one that compels us to question conflicts of the past, continuity, and change, and our own views. This isn’t easy to do: history isn’t in black and white but instead very nuanced. We are challenged to think beyond the appearances and find out about those gray areas.”

Mark your calendar for Tue, April 5 at noon for the League of Women Voters Annual meeting. Only members may vote.

These hybrid presentations will happen simultaneously in Marvin Auditorium BC and on Zoom. Both venues are open to the public. Find the Zoom link and more information on the library’s calendar. Email connect@tscpl.org with any questions.