Trivia Q. One of the authors listed in our newsletter goes by the pen name Robert Galbraith. Do you know this author’s real name?

Trivia A. JK. Rowling is the author using the Galbraith pen name. Rowling, of course, is the world-renowned author of the Harry Potter series.

Trivia Q. A Topeka writer and newspaper columnist once said, “There are no sharps or flats on a typewriter, but it still can turn out some sour notes.” Who was this beloved female author?

Trivia A. Zula Bennington Greene, or most commonly known as Peggy of the Flint Hills, was a columnist for the Topeka Capital-Journal. Her memoirs were recently published posthumously by her daughter.

Trivia A. They were all retired in 1990. Check out the newest kid favorite book about crayons, The Day the Crayons Quit, and remember to respect the crayons.

Trivia Q. What was the original name given to the day we now commemorate as Veterans Day?

Trivia A. Armistice Day. Armistice Day got its start on Nov. 11, 1919 as a way to recognize the armistice of World War I, marking the first anniversary of the great war’s ending. It was made a national holiday in 1938, and President Eisenhower changed the name to Veterans Day in 1954. Search our catalog for stories of Americans throughout history.

Trivia Q. According to Alexander Pushkin’s fantasy poem “Ruslan and Lyudmila,” what character from Russian folklore lives in a “cabin on chicken legs … with no windows and no doors”?

Trivia A. Baba Yaga. Find out more about this sinister witch of Russian folklore.

Trivia A. JK Rowling, the author of the wildly popular series of Harry Potter Books posted tweets on Twitter today that raised some eyebrows and raised the question of whether the author would return to the tale of the Boy Who Lived.

Trivia Q. Johnny Appleseed is known in American folklore as a man of great kindness who planted apple trees all across the United States. However, he was a real person who was born in 1774. What was his real name?

Trivia A. John Chapman. Browse our catalog for some great stories about the legendary apple enthusiast.

Trivia Q. Willy Lowman is a famous character in a play focused on a particular vocation. Do you know the play?

Trivia A. Death of a Salesman (Arthur Miller)

Trivia Q. What food festival do the folks in Liberal, Kansas and Olney, England celebrate every year with a competitive race?

Trivia A. International Pancake Day! It’s the one day every year where it’s okay to run down the street with a flapjack and not get any funny looks. Want a great pancake recipe so you can get flipping this weekend? Try checking out the Big Book of Breakfast.

Trivia Q. Which 1986 movie character hacked into his school’s computer to change the number of absences on record?

Trivia A. It was the rascally Ferris Bueller, of course, from the popular 80’s comedy film. If you’ve never seen Ferris Bueller’s Day Off, go over and place a hold on the DVD. It’s an 80’s classic, and the perfect DVD for back-to-school.

Trivia Q. How often does the average person visit the supermarket, and how much does on average do they spend?

Trivia A. According to the Food Marketing Institute 2010 research, the average American visits the supermarket 2.2 times a week and spends $26 on average. However, now you have the chance to save a little more of your money when you go to Topeka’s Hy-Vee. There you can use the new Library smartlocker to pick up requested titles at no cost.

Trivia Q. What’s the name of the Topeka church with twin towers that dots the downtown skyline?

Trivia A. St. Joseph’s Catholic, 227 Van Buren, a center for the German community in early-day Topeka, was completed about 1900. Uncover this and other long-forgotten secrets of the Golden City when you stop into the Topeka Room (second floor).

Trivia Q. Stratus, cirrus and nimbus are types of what?

Trivia A. Look up. The answer is in the sky. It’s those clouds floating by 🙂
So now that you know that one, conquer some more weather trivia – and rack your brain on other various topics – by playing the Online Summer Reading Bonus Level. It’s free, but registration is required. You get to earn cool, virtual badges like these ones and compete members of the community. 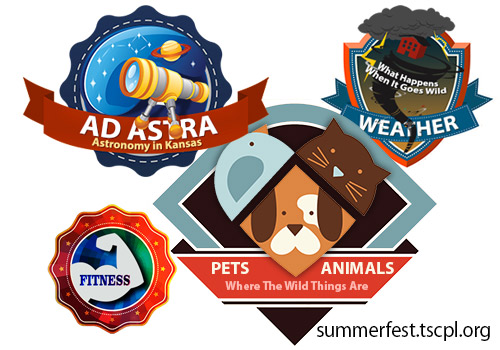 Trivia Q. David Shannon, the guy who illustrated How I Became a Pirate, also illustrated a popular series by Jon Scieszka. What is the name of the series?

Trivia A. Trucktown. The 50-book series ranges from picture books to the more advanced “Ready to Roll” early reader titles, and the library’s got a shelf full of ’em. If your child’s favorite Trucktown titles are all checked out, browse the many other transportation-related books in the Kids Library. 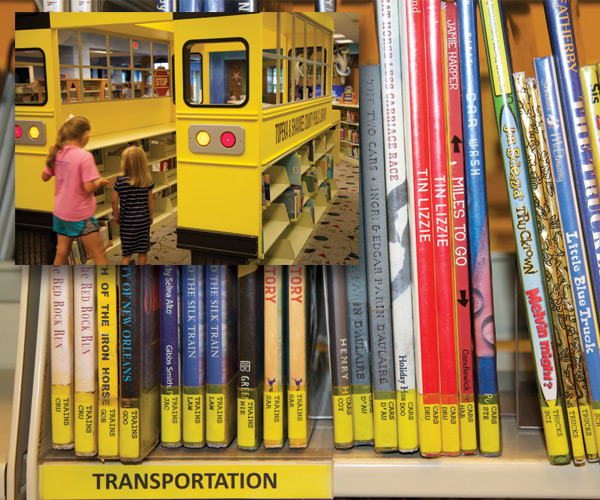 Find the Trucktown series, along with other transportation books, on the shelf of the school bus.

Trivia Q. Holy trivia, Batman! This one’s not about the caped crusader, however. We want to know if you know… Who played Catwoman in the film Batman Returns?

Trivia A. Michelle Pfeiffer. Meow. Of course you can check out the beloved Batman movies to enjoy at home, but why not share in the Batman lovefest May 17 as we celebrate Batman’s 75th birthday – or at least the birth of the 1966 film Batman: The Movie. Come for Batman games, crafts and displays, which starts at 2pm. The film starts at 4pm.

Trivia Q. What mid-’70s/early ’80s band popularized the catchphrase “Dōmo arigatō, Mr. Roboto”?. (Good luck getting that song out of your head.)

Trivia A. Styx. Want some music that takes you back? Listen to our comps of classic rock, many of which include Styx songs. Check out Styx Greatest Hits and The Grand Illusion: Love, Lies and My Life with Styx, a book by bassist and founding member Chuck Panozzo.

Trivia A. Walter Mosley, who brought us the great, hard-boiled detective Easy Rawlins. Check out the Easy Rawlins mystery series. His mystery Little Green will be the inaugural book for the One Book, Many Voices book club April 17 at 7pm. Come share your thoughts. Learn more about the author, the book and Rawlins’ character in this video book discussion.

Trivia Q. This actor grew up in Overland Park, Kan., and starred in Horrible Bosses and We’re the Millers, following a stint on Saturday Night Live.

Trivia A. Jason Sudeikis. If you guessed Paul Rudd good guess, but wrong, though he did grow up in Overland Park and went to the same high school(Shawnee Mission West) as Sudeikis. Check out episodes of Saturday Night Live, including the best of Will Ferrell, Chris Farley and Eddie Murphy, on catalog.tscpl.org.

Trivia Q. St. Patrick’s Day is March 17. A phrase you’ll likely hear during that day is: “Erin Go Bragh.” What does that phrase mean?

Trivia A. Erin Go Bragh translates to “Ireland Forever.” You can learn how to speak a foreign language, Irish or otherwise, with Mango, an online language learning software. tscpl.org/mango

Trivia Q. The 1955 Montgomery, Ala., bus boycott was spurred by the refusal of this woman to give up her seat on a segregated city bus.

Trivia A. Rosa Parks, born Rosa Louise McCauley. She was a seamstress at a Montgomery department store. She and her husband subsequently lost their jobs as a result of championing this civil rights fight. Learn more about Parks by checking out these titles: Rosa Parks: My Story, Quiet Strength: The Faith, the Hope, and the Heart of the Woman Who Changed a Nation, The Rebellious Life of Mrs. Rosa Parks and Rosa Parks: A Photo-illustrated Biography

Trivia Q. How long does it take for the light from the Sun to reach the Earth?

Trivia A. About 8 minutes. Have fun with other scientific facts at Sid the Science Kid at 2pm this Saturday at the Topeka Performing Arts Center. TPAC and the Library, along with the Sid and his friends, will teach your child science is cool! Tickets are still available. Find details here!

Trivia Q. After Kansas was admitted to the Union, how many stars were on the United States flag.

Trivia A. 34 stars. Kansas was the 34th state admitted to the Union. Learn more about Kansas history and read famous Kansas authors in the Topeka Room (second floor).

Trivia A. False – The landmark ruling that ended race-based restrictions on marriage in the U.S. would be delivered four years later in 1967 in Loving v. Virginia. Learn about Mr. and Mrs. Loving and talk to a panel who share similar experiences when you attend the Created Equal film series Feb. 2 at 3:30pm. The documentary film, The Loving Story, will be shown; discussion follows.