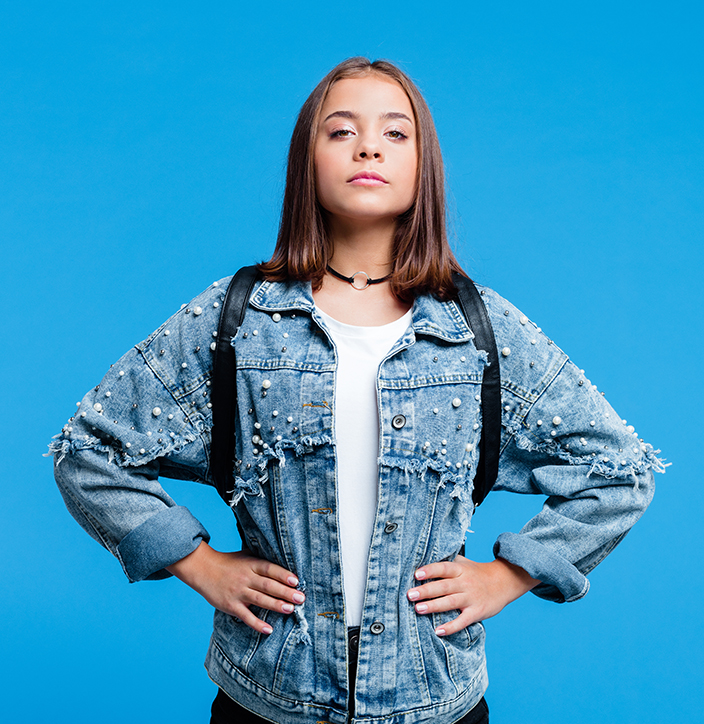 Happy March, friends! This is Women’s History Month and I wanted to take this opportunity to shine the spotlight on a few of my favorite strong women in fiction. The important thing about strength is that it doesn’t look the same on every person or in every situation. What does it mean to be strong? The young women portrayed in these books find out what it means to be strong in their worlds. Let‘s review the fictional women who inspire us and demonstrate the inherent power of womanhood. 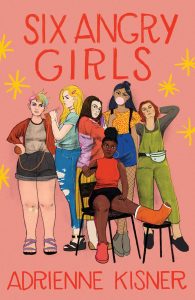 Six Angry Girls begins with Raina Petree getting dumped. To add insult to injury, the drama club excludes her from an important vote, which makes her feel dumped all over again. Raina is watching her nemesis triumph in all the areas she cared about while her grip on her dreams begins to feel less steady. In a desperate moment, Raina writes an advice columnist about her heartbreak and receives an unexpected suggestion to take up knitting.

Meanwhile, in the mock trial club, Millie Goodwin is ousted from the club she helped build over the last three years. Worse yet, it was in favor of an all-boy team. Teaming up with a newly radicalized Raina, she channels her righteous fury into recruiting four more angry girls and forming their own mock-trial team. They find members in Raina’s knitting group, the cheerleading squad and throughout the school. These teens unite for an important goal and learn about themselves and their capabilities along the way.

This book showcases young women experiencing several different let downs and beginning the work of exploring themselves. The important thing about this book, what really captivated me, is how none of these young women are content to accept defeat. They channel their emotions into solutions and band together. They take on the patriarchy and learn new skills. Along the way they overcome preconceptions about the world, themselves and each other.

I loved reading this book. I felt inspired by the girls who refused to lay down and accept their defeats and choose instead to persevere. They push their own limits and succeed individually and as a unit. Kisner does a wonderful job of presenting a story that challenges us to consider the limits we have imposed on ourselves and ask if we’re willing to push our own limits.

The Girls I’ve Been by Tess Sharpe 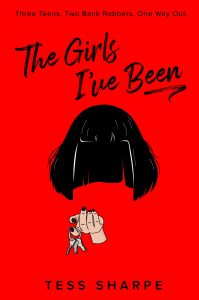 Nora O’Malley has a complicated past, littered with the girls she’s been before. Raised by a con artist mother, Nora grew up switching names and personalities like clothes. Now that she’s free of her mother and living with her sister, she’s retired those skills and cautiously begun to settle in. Then in middle of a routine stop at the bank with two friends, there’s a robbery. Suddenly Nora’s skills become the only thing that could save her and her friends. Who does she need to be to get inside the robbers’ heads? Which of her past persona’s has the necessary skills to outwit them?

Her most dangerous past persona rises to the surface to take on this situation. Saving her friends might mean sacrificing herself and the life she’s found. Nora is going to do what it takes to protect those she loves. These robbers have no idea who they have taken hostage and how she could be their undoing.

This book is a thrill ride from opening to ending. We slowly learn the story of how Nora was raised and hear the tales of each girl she’s been trained to be. Each of these past personas has left a scar on Nora’s psyche but has also made her strong in ways necessary for her to survive this catastrophe. Nora, her best friend and her girlfriend tap into their personal strengths to attempt to save themselves and the other hostages. Sharpe does a remarkable job of creating an atmosphere of tension and realistically traumatized characters in the process of healing. Be prepared for sensitive topics in this read. 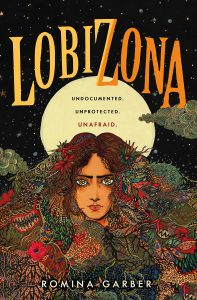 Manuela Azul has been hidden and labeled as illegal her entire life. Manuela and her mother live in a small apartment in Miami with her surrogate grandmother. She is never to leave the apartment as her eyes mark her a different immediately. Her eyes are golden with a star shaped pupil.

Manuela’s days are all the same, until the day her grandmother is attacked in their apartment. The same day her mother is arrested by ICE leaving Manuela on her own. She’s free but with nowhere to go and nowhere to belong.

Following a suspicious man she sees lurking outside their apartment building, Manuela discovers a magical world in the wilds outside Miami. A world of Brujas and Lobizonos – witches and werewolves. Their eyes are like hers with star shaped pupils in an array of vibrant, impossible colors. However, none are quite the color of hers.

Where does Manuela fit in? Is she a Bruja who’s powers have been suppressed? Or is she a Lobizona, a female werewolf? Somehow still illegal in this magical world, Manuela tries to hide her unusual traits and blend in while searching for her father. How long can she hide in this world of magic? More importantly, does she want to hide?

This book enchanted me. I love the culture and magic fused in every ounce of this story. Even in a magical world, Manuela and the other characters come face-to-face with uncomfortable constraints of a patriarchal society. Women are Brujas and have a defined role within their society. Lobizonos are male and have their role to play within the society. How can Manuela find a place to fit into the rigid roles and traditions?

Garber masterfully presents questions of what it means to be illegal. This book explores how societal gender roles foisted upon youth shapes the future.

With the Fire on High by Elizabeth Acevedo 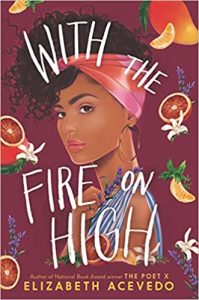 This is a character-driven masterpiece. The character is our protagonist, Emoni. As a single mother in her senior year of high school, Emoni has a lot going on. She lives with her abuela to help make ends meet and to keep her strong family ties front and center.

Emoni is a wonderful cook and pours all her emotions into her food. When she gets a once-in-a-lifetime opportunity to take a cooking class through her high school, Emoni takes a chance. It requires a lot for Emoni personally as she has never been one to follow a recipe in the kitchen. Through hard work, in the kitchen and on herself, Emoni perseveres and makes incredible strides toward her dreams. Her dedication to her daughter, Emma, and her abuela never wavers through all her tough choices. Emoni is a picture of real female strength.

Acevedo expertly delivered a novel that embodies the impact of quiet strength. Delicious recipes are sprinkled throughout the book. This offers readers the opportunity to further connect with Emoni in her love language – food. I also really enjoy the love story woven through the book and how it doesn’t steal Emoni’s focus, but rather enhances her commitment to her goals.

Rules for Being a Girl by Candace Bushnell & Katie Cotugno 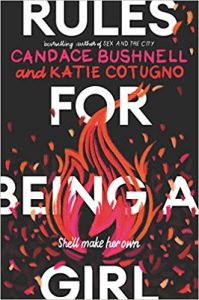 The rules for being a girl are a subconscious set of rules imposed by society and foisted upon girls from an early age. We frequently don’t realize we have these rules or question them until something happens to demonstrate how we are failed by the rules.

Such is the story of Marin. The most fun and relatable teacher in school, Mr. Beckett – called Bex by his students, takes special notice of Marin during her senior year. He begins simply by chatting with her during school hours and confiding in her. There’s a seemingly innocent run in at Starbucks where he tells her about the book he’s writing. Then a ride home. All of this adds up, making Marin feel special and comfortable in Bex’s company. Until she winds up at his house and he plants an unwanted kiss on her.

This sends Marin into a spiral. She tries to confide about it to her best friend who brushes it off and asks if Marin was sending him signals. Bex confronts her to make sure they’re “good” and that she’s not going to do anything about it. Marin decides to keep it a secret and it churns in her.

She writes a piece for the paper, called Rules for Being a Girl, in which she calls out the double standards imposed on women and makes a defiant feminist statement. With the help of the librarian, Marin starts a feminist book club and begins making new friends and doing some self-exploration.

This book is one of the most impactful books I’ve read in a long time. It forces me to think about how I’ve viewed and reacted to events and experiences in my life. Rules of Being a Girl demands introspection on the unspoken rules ingrained in me and how I have, in turn, imposed them on others. The writing was superb and the characters were relatable. It takes us on a journey where a young woman builds her strength and raises her voice against the injustices in her life and those foisted upon women in general. 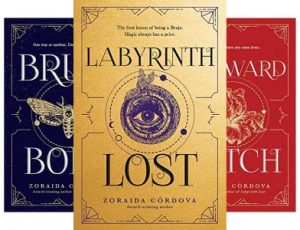 As a bonus recommendation, I suggest a series that spotlights a whole family of strong women. They are strong on their own and stronger together. The Brooklyn Brujas series has three installments, each chronicling the tales of one of the Mortiz sisters.

In Labyrinth Lost the middle sister, Alex, has been suppressing her Bruja powers. After her family discovers her powers, Alex decides to rid herself of her powers forever. Naturally, the spell backfires – her powers are intact and her entire family has been abducted. Alex must traverse the treacherous realm of Los Lagos to rescue them and face the consequences of her rash actions.

In the second book, Bruja Born, oldest sister Lula struggles to deal with her time in Los Lagos. As if this isn’t enough, her boyfriend and classmates die in a terrible bus accident. A natural healer, Lula strives to save them. Crossing the lines, she also makes a terrible mistake in the name of love. She unintentionally brought back her love and her peers as zombie-esque creatures. Lula seeks her family’s help to right her wrongs.

The final installment, Wayward Witch, focuses on Rose. She is the youngest sister and has always seemed mature and wise beyond her years. When Rose leaves her own deathday party she is furious with her father. Then the two of them are abducted and taken to the magical realm of Adas. Rose must save Adas from the thing that is consuming it. Her and her father’s lives depend on it. The final Mortiz sister finds herself, loses herself, and finds herself again in this incredible finale to a much beloved series.

I adore this series! We spend time with each of the three sisters and learn about them from their perspective and their sisters’. They each face difficult personal journeys and must find the strength within themselves to right their wrongs. This series is also steeped in culture and family values, which gives the books such heart. I highly recommend these books if you want to be swept away on an adventure and feel all the feels.