Hi friends! This month I am taking on a difficult but important topic: Sexual Assault. As April is Sexual Assault Awareness and Prevention Month, I have selected a few books I believe handle this traumatic issue with the respect it deserves. The statistics on sexual assault in our country, and around the world, are staggering. In America someone is sexually assaulted every 73 seconds. That’s one minute and 13 seconds. That statistic includes all categories- male, female, child, adult, elder, transgender, cisgender, race and religion. Every nine minutes in America, a child (someone under the age of 18) is sexually assaulted.

Even with these horrifying statistics, it was still alarming to see those numbers personified by the #metoo movement that turned those numbers into names. The #metoo movement was originally founded in 2006 by Tarana Burke to raise awareness. Eleven years later, a viral tweet by actress Alyssa Milano brought it into the sphere of public consciousness and brought new awareness to the worldwide assault epidemic.

Proceed with caution when considering these reads, friends. Even as these are important reads that can illuminate and build empathy, they are also heavy, brutal reads.

Ever Cursed by Corey Ann Haydu 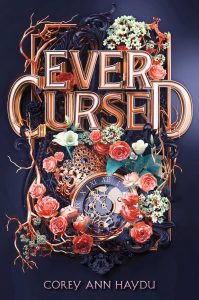 This is a severely twisted fairytale. Welcome to the Kingdom of Ever where the five princesses are celebrated. Beloved by their kingdom and father alike, they live a charmed life in the castle. Or, a cursed life that is. The first thing you would see if you were to approach the castle in Ever would be the Queen. She’s been frozen for the past five years and forever stares towards the Kingdom of Ever. The day she was frozen is the day her daughters, the princesses, were cursed to be Without by a young, angry witch.

On their 13th birthday, each princess’ curse came to life. Jane, the oldest, is cursed to never be able to eat. Alice cannot sleep and Nora cannot love. Grace cannot remember and Eden, the youngest, just lost her ability to hope. Through the magic of the spell they all survive, but they suffer through the effects of their various curses.

Now that all five curses are active, they have a limited time to break the spell before they become permanent and the princesses perish. As the stakes have heightened, their beloved father invited other royals and upper class of other kingdoms to observe his strange daughters and even attempt to court them.

Without other options, the sisters seek help from the witch who cursed them. Reagan, who bears the weight of the curse she cast, agrees to assist them in their attempts to break the curse.

This book blew me away. It handles many heavy subjects but does so with grace and tenderness. Haydu’s writing style brings the strife of these young women’s journey to life and it seems to flow off the page. We encounter the difficult truths of their punishments with them. We learn how truly painful it is to see that a person you love is not at all who you thought they were. How do you cope with the sins inflicted on others by someone you love? How can you ever make amends? This book explores these painful paths. 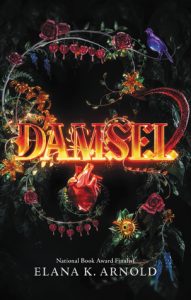 Damsel borrows tropes from many familiar fairy tales. It begins with a prince on a quest to battle a fearsome dragon and rescue a damsel, whom he will wed. Sound familiar? After we follow Prince Emory on his quest as he battles the dragon, we switch to the Damsel’s perspective. She awakens in the prince’s arms having no memories of her past or her time with the dragon. Emory names her Ama and tells her he saved her from the dragon and she will be his bride.

Prince Emory makes it very clear that he gets what he wants from women and as prince, the women don’t get to say no. As Ama is destined to be his bride, she is expected to submit to his demands. When she meets her fiancé’s mother, we discover similarities between the two women. The queen was also a damsel rescued from a dragon by Emory’s father. She has no memory of her time before him. As her wedding approaches, Ama searches for answers while growing increasingly ill.

I don’t want to give too much away, but I do want to let you know that this book is not a comfortable read. It is not intended to be. This book is raw and challenging. The sexual assault in this book is a large part of the story. It asks questions about the role societal expectations can play in creating an environment where people look the other way. It examines how the patriarchal tones present in our classic fairytales cast women in specific and limiting roles. What does it mean to be a damsel? Who decides if you’re in distress?

The Nowhere Girls by Amy Reed 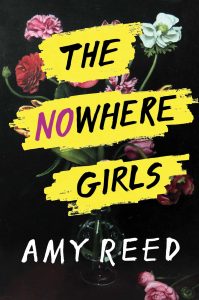 The Nowhere Girls is told from the perspectives of three high school misfits. Rosina Suarez is a queer punk girl growing up in a conservative Mexican immigrant family. She has a lot of responsibilities and a lot of repressed feelings.

Rosina’s best friend, Erin Delillo, is usually ignored and thought of as strange. With high functioning Asperger’s, she tends to present a more logical approach to things. Beneath the surface are a lot of emotions and memories she’s trying to drown out.

Lastly, there is new girl Grace Saltzer. Grace is new to feeling like an outsider. She  always had a place to belong in the church she grew up in with her mother as a preacher. When her mother had an accident and a radical change of views, their family moved to Oregon.

When Grace finds a note on the wall of her new room, she becomes curious as to who used to live in this space. It doesn’t take long for her to learn that Lucy Moynihan, the room’s former occupant, was run out of town after accusing three popular guys of gang rape. Incensed at the injustice of the event and the way the town ignored it, Grace decides to do something. Along with Erin and Rosina, she forms the Nowhere Girls. They keep it anonymous and open to all the girls in their school. Together these high school girls take a stand against rape culture and strive to make a real and lasting difference.

I am obsessed with the Nowhere Girls meetings. Each meeting is full of honest, genuine discussion of real issues. Through multiple perspectives, the book presents the reader with insights into the motivations of the lead characters. It hammers home the point that we don’t know what the people around us are going through. We don’t know what happened in people’s past that drives them. This book builds empathy and empowers readers to have important discussions even if they’re uncomfortable.

Something Happened to Ali Greenleaf by Hayley Krischer 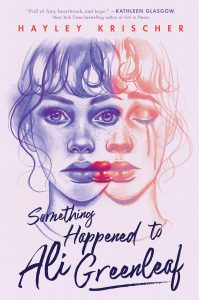 Something Happened to Ali Greenleaf is both a title and a summary. In the beginning of this searing read, we meet two young women – Ali Greenleaf and Blythe Jensen. It all starts at a party Ali attends with her two best friends. She finally works up the nerve to talk to her crush, Sean Nessel. Ali’s shocked and thrilled when he seems interested in her and they move their conversation upstairs to a bedroom where they begin to kiss. Sean becomes pushy and doesn’t listen when Ali wants to slow down. He rapes her. Ali flees the party.

Blythe saw Ali leave, everyone saw her run out of the party in tears. Blythe is the most popular girl in school. She’s close friends with Sean and can’t bring herself to believe anything bad about him – even as he approaches her, looking distraught and begs her to talk to Ali for him. Blythe agrees, certain it was a misunderstanding. She takes Ali under her influential wing and begins slowly trying to reshape Ali’s perspective of the events. Ali is trying so hard to deal with what happened. She is ashamed, frightened and so very angry.

Through this powerful work, Krischer explores how an event like this ripples through lives and shapes the future of survivors, perpetrators and those caught in the wake. This book is a highly emotional read. Of the many important messages of this book, the standouts for me were: It’s still rape, even if you liked him; even if you willingly kissed him; even if you went with him to a private room. You can revoke consent at any point. This book also explores the power of friendships, for better or worse, and finding one’s self worth.

Saints and Misfits by S.K. Ali 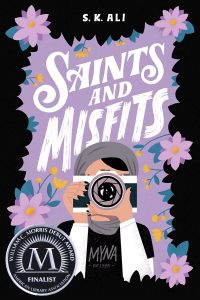 In Saints and Misfits, S.K. Ali explores Janna’s mental and emotional journey after the brother of one of her close friends assaulted her. This creates distance in her friendship as she can’t fathom telling her friend what happened. Janna is a Muslim and everything about her life is intertwined with her faith.

This assault sends her down a path where she must evaluate her relationship with her religion as the monster continues to gain favor in her Mosque. He presents himself as holy and untouchable. Janna struggles to decide what to do with this secret and who she could tell.

Looking through the lens of her camera, Janna sorts the people in her life into categories, namely Saints and Misfits. The category of saints is reserved for those she sees as inspirational and believes they are contributing to moving the world forward. Misfits, like herself, are those who don’t quite fit into the roles society has relegated them to. The final category is Monsters. Monsters parade around as pious and religious individuals above reproach. Monsters like the one who tried to rape her in the basement but is being celebrated in the Mosque for his achievements. As Janna’s understanding of herself grows through the book, she decides to take matters into her own hands.

This powerful book examines the role religion can play in someone’s life. How it can be used as something for monsters to hide behind as well as empower a person to stand up. It can comfort and condemn. Ali takes us into the mind of a young woman making difficult decisions and ultimately deciding who she is and who she wants to be. This book celebrates family, faith and self, and leaves the reader with important questions.

In these reads, I hope you find solidarity, empathy and feel seen. Your truth belongs to you. How and when you share your truth is up to you. You do not owe anyone your truth nor do you owe it to anyone to conceal what you endured. The shame attached to these events belongs to the abuser and not the survivor.

If you are looking for a book on a sensitive topic, feel free to reach out to the librarians who will assist you in finding what you’re looking for and be discreet about it.